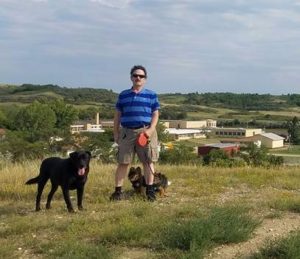 David Perry is a former Humanists of Minnesota board member and HofMN member since 1997. He’s been a teacher for over 25 years, most recently working as a bilingual math and science teacher for the Minneapolis Public Schools.His quest to get a principal or assistant principal job led him to an unexpected place this school year.

After getting my principal’s license just over a year ago, I began looking for a position, but soon discovered the prospects were daunting. It turns out many teachers hold principal’s licenses and I was competing against dozens of candidates for each position. The White Bear Lake Public Schools told me that 125 people had applied for one assistant principal job!

I realized I was going to have to relocate if I wanted to break into an administration role in education. My two children are grown and my wife, Anaceli, also a public school teacher, was willing to join me.  So nothing was holding me back—and I began a nationwide search. But I learned that things weren’t much different in other cities. I applied to many school districts and usually didn’t even get a reply (how rude!).

I concluded the next step was to find a place that had trouble attracting employees. Could that be inner city Chicago, inner city New York, Alaska, on the border of Mexico? None of these places seemed to have a shortage of school administrators. But then I struck gold: Mandaree, North Dakota! That’s where I have called home since August.

Mandaree is on the Fort Berthold Indian Reservation, not far from the North Dakota badlands in the western part of the state. You could say it’s in the middle of nowhere. It’s a village of less than 1,000 people, with just one convenience store. The nearest town with at least a grocery store, a gas station, and a few restaurants is Watford City, which is about a 45-minute drive. The nearest somewhat big city is Dickinson, which is about an hour and 15 minutes away and has pretty much everything that we need.

Mandaree Public School, which gets funding from the Bureau of Indian Education, is tiny, with only about 215 students from kindergarten through twelfth grade. Our graduating class each year is around 10 to12 students.I was hired as a Title 1 Director/Instructional Coach/Assistant Principal. My job is multifaceted and so far has been both challenging and fascinating. When I first arrived, I discovered what it means to work in a school that has trouble finding employees. Since I was not assigned to a class and was considered “expendable,” I spent the first five or six weeks in the classroom subbing.

A shortage of employees is an ongoing issue at Mandaree Public School. With only 1,000 local citizens, the school has to employ nationwide. But coming to such a small village and working on a Native American reservation is not for everyone.  It can be isolating and outsiders do not always feel welcome. One native friend of mine described Native American reservations as the “fourth world” because of the extreme lack of economic development.

So there has been a revolving door of principals and teachers. That becomes a burden on everyone, with administrators subbing and teachers losing their prep time day after day. It’s difficult to take a day off because there are no subs and you know that your absence will cause a burden on others.

Another problem is that some of the classroom teachers are not fully trained. In shortage areas like Mandaree, the State Department of Education is more lenient in granting provisional teacher’s licenses. It’s hard enough running a class as a trained teacher with lots of experience, but it’s really hard on untrained teachers. It’s not a surprise if they don’t stick around very long.

Despite these challenges, I’m doing great. As a former Peace Corps volunteer who also lived in Mexico on a local teaching salary for three years, I’m no stranger to difficult living conditions. I absolutely love living in a small village where I get the chance to know people like I wouldn’t elsewhere. My experience abroad, and my work in inner-city schools during most of my career, has taught me how to fit in with local communities. So far, I don’t seem to have stepped on any toes (as I’ve witnessed some other staff members do!).

The needs in Mandaree are so great that I feel like I’ll be able to contribute more here than in a big city where things are already in place. But I know change can be slow and I hear my dad’s voice saying that you have be at a place for a few years before people start to really listen to you.

Anaceli got a job as a.second-grade teacher and also loves working and living here. She has seen her students grow a lot since the beginning of the school year.

We also brought our dogs and our cat. Staff members are provided with a house and we have cable TV and internet so we really do feel at home here. My house is right across from the school so…Arrival time to school every morning: 8 a.m. Departure time to arrive on time: 7:59. One of the perks of living in a small village!