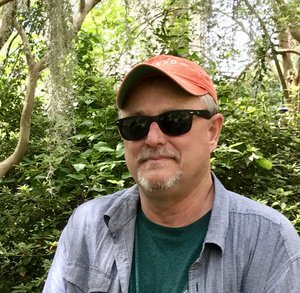 What’s the difference between humanism and Unitarian Universalism? This is a genuine question for me, even though I once chaired a UU board and have been a Humanists of Minnesota member for several years now. Newsletter editor Suzanne Perry suggested exploring the question with David Breeden, senior minister at First Unitarian Society of Minneapolis, who is an expert on both topics.

Breeden’s office at FUS feels like the comfy home of an intellectual, or at least someone who reads books by the shelf-load.  We sat down to talk in September and he made me feel both welcome and equal.  My interview of him very naturally became a conversation.

His path to UU ministry came after his career as an English professor.  He holds a Master of Fine Arts degree from The Iowa Writers’ Workshop, a PhD from the Center for Writers at the University of Southern Mississippi, and a Master of Divinity from Meadville Lombard Theological School in Chicago.

During his earlier professorship, he was an oft-published poet and translated the Stoic philosophers from the original Latin. [Translating Latin] “keeps the mind sharp.” he says. He was also a disc jockey in the ’70’s, which is too ancient to be sharply relevant, but a fun fact nevertheless.  And he still owns the family farm that two of his children now manage.

As we delved into the meat of our topic, I was astonished to hear he considers himself a humanist first (he’s an HofMN member ) and a UU second.  He is now the Dean of the Humanist Institute, overseeing its theory and teaching. “Humanism is the best available human thought that leads us to moral and ethical decision-making,” he says. He will be teaching a course for the Institute in Minneapolis in January about The Humanist Life Stance.

Breeden believes that humanism is an outgrowth of Unitarian Universalism, which emerged from Christian traditions, but has surpassed UUism in its depth of understanding and relevance, pointing a way to the future.

For example, Breeden would like to rid UU churches of any trappings of religion, saying, “The use of Christian language makes me tired.” In practice, that means that FUS eschews “hymns” in favor of “songs,” and its website announces the coming Sunday’s “talk,” not “sermon.”  However, it is still a “church,” for what that’s worth. There is no prayer at FUS, and no God talk.  In fact, Breeden periodically reaches out to atheists, and FUS rents space at a discount to HofMN for our chapter meetings. FUS will function as atheist Chris Stedman’s base as he ventures to create a Humanist Center and encourage cross-conversations among potential allies, including religious ones.

It is difficult to pin down UU school of thought, which lacks any official creed or dogma.  In my experience, each UU church in the Twin Cities area has formed its own personality, and varies in its internal dose of religion, among other things. Informally, the Mahtomedi UU church is known as the “eating” church because its events are awash in food, the First Universalist Church of  Minneapolis the “loving” church because of its full-time paid social justice position, the FUS church the “thinking” church because of its reputation for intellectualism, and Unity Church-Unitarian in St. Paul the “praying” church because of its tolerance for the G-word and occasional prayer.  (Each of these terms is an exaggeration, of course, though I recently attended Unity and the congregation did indeed pray as a regular part of the service.)

Breeden was preparing his talk for the coming Sunday when I arrived. The topic: “Reality-based people follow the truth regardless of whether they like it.” He takes heart in the principles that unite UUs and humanists, and one of them is central to both.

“Our common ground is firm and wide,” he says. “UU’s allies are the reality-based people.”  That would be us, and it’s a sound swath of real estate on which to stand.