From George: You may have noticed familiar names in the Star Tribune letters to the editor this year. That is no accident – a volunteer team of letter writers has been busy representing secular viewpoints on important issues. This is our story.

Early in 2021, I had to do a leadership project in the Freethought Toastmasters Club. It required putting together a team and leading it to goals that I had to define. I decided to pull together people to write letters to the editor of the Star Tribune on secularist issues. 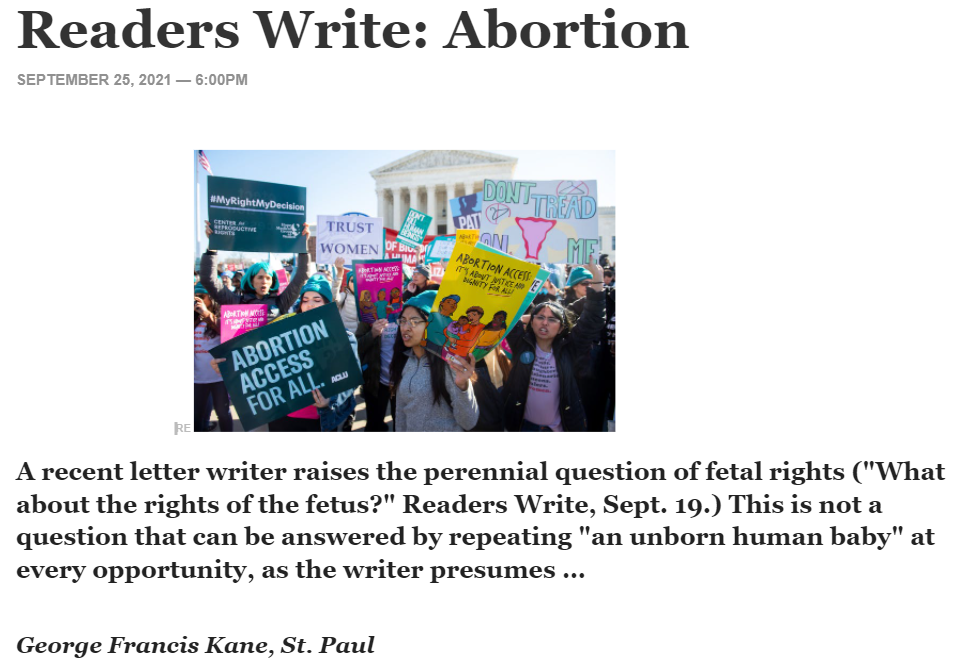 I had a lot of experience writing letters to the editor of the Escondido Times-Advocate when I lived in North San Diego County in the early 90s, but they did not have a unifying theme. My experience with the Star Tribune was in the early 2000s, when I was spending hours a day posting on their discussion boards. I stayed in the Faith and Values section, where I had lengthy debates with Christians on a variety of issues. Most often they were civil.

Eventually the Star Tribune closed their discussion boards. They explained that they were no longer needed since new enhancements would permit readers to post comments on every article published in the online edition. It seemed that they had no interest in discussions about anything except articles that they had published.

I receive email alerts every day from the Freedom from Religion Foundation, and many days from Americans United for Separation of Church and State, American Atheists, and the Secular Coalition for America. So I know that there are things going on every day that impact secular government: cases in federal and state courts, bills in Congress and state legislatures, executive orders by the president and state governors. But these reports never seem to make it into the Star Tribune.

The first couple of letters I submitted did not get published. Then in late February 2021 the paper published a commentary that asserted that Harriet Tubman, who will replace Andrew Jackson on the $20 bill, was a gun-toting Christian. I replied that “(T)he hostility that the commentary writer believes that liberals have for Christianity is nothing more than our commitment to the Establishment Clause of the First Amendment. We insist merely that the government never prefer one religion over any other.” The Star Tribune published it under the headline “Skip the Christian victimhood.”

That was my first success! I finally had an affirmation that this project was worth pursuing. Shortly after my letter appeared in the paper, Erik Riese and Erica Klein joined the team. Later, Ross Meisner and Steve Petersen joined. In the year that the team has been together, we have had 16 letters published. We work collectively on drafts, but the writer has the final say on every aspect of his or her letter, including when it is ready to submit.

We have focused on the Star Tribune because it has the largest circulation in Minnesota, but we could send a letter to any other forum. There has only been one occasion when two of us wrote in response to the same letter, and both were published. If we had a larger team, that could happen much more often. I think we have found a useful vehicle for getting the secularist viewpoint in front of a large audience. If you would like to join us on our team, please let any of us know.

The theme of the project is secularism — that is, the separation of religion and government. It is no surprise that we have addressed Christian victimhood, Mike Pompeo’s Commission on Unalienable Rights, declining church attendance, distinguishing religious liberty from religious privilege, a commentary on the need for faith, social studies standards in public schools, health care workers, and the ever-increasing presence of “nones” (people without religious affiliation) in public schools. But by far the issue that we have addressed the most is abortion rights. We have to point out to the Star Tribune the relevance of some of their stories to the separation of government and religion, even though they would rather ignore it.

From Erica: I expected to get nasty reactions to my letters. So far I haven’t, but something interesting has happened as a result of each of my letters that has been published.  For example, after the first one, I was contacted by a like-minded woman in my town and invited to a Shabbos potluck at the local nature preserve (I’m a Jewish atheist), where I met some friendly people.

After my second letter, I was contacted by a guy out of Chicago who runs a volunteer group called Common Good Governing. He scours major city newspapers letters to find people who might be interested in volunteering with his group to find candidates to support in contested critical U.S. House races. I’ve been volunteering with him ever since.

After my third letter, which was reacting to a previous letter, I was contacted by that original letter writer. She liked what I said in my letter, and clarified the point she was trying to make. We had a friendly exchange. Overall, being part of the letter-writing team has been a fun and satisfying experience with surprising dividends.