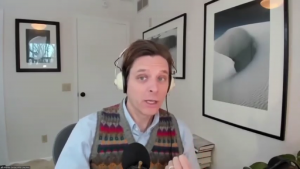 The Jan. 6 insurrection at the U.S. Capitol showed to the world that Christian nationalism is more than just a scholarly debate about whether the United States was founded as a Christian nation, Andrew Seidel told our January Community Gathering. “It is a violent, exclusionary movement bent on seizing power in the here and now,” he said.

In an online presentation, Seidel, a constitutional lawyer at the Freedom From Religion Foundation, detailed the role of Christian nationalists in the violent attack on American democracy. The many examples included the opening prayer by evangelist Paula White, who added “the United States of America” to the biblical Lord’s Prayer; the “QAnon shaman” who led a prayer in the U.S. Senate about “patriotism, Jesus, and restoring the nation”; the attacker who carried a Christian flag into the Senate; and the right-wing extremist Proud Boys who were hailed as “God’s warriors” as they marched to the Capitol.

Seidel, the author of The Founding Myth: Why Christian Nationalism Is Un-American, added an epilogue to the new paperback version to discuss the insurrection, which he told us provides further proof that the movement is un-American.

Watch Seidel’s presentation on video below.