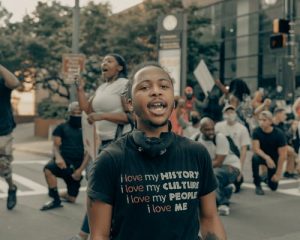 America is becoming more diverse. That’s obvious. But did you know that for the past decade, demographers have been projecting that by 2045 the majority of the U.S. population will be non-White? And now, those projections are becoming a reality. Data from the 2020 census  indicate that almost 53 percent of the U.S. population under 18 identifies as non-White.

While Minnesota is less diverse than the nation as a whole, in the metro region especially but also across the state, the non-White youth population is growing significantly.

Unfortunately, these population trends are being used by some to sow division in our country. Our previous president built his brand by stoking fear of “the other” among White Americans. Now, conservative pundits and politicians have developed a full-blown strategy to fuel the flames of fear, resentment, and division by turning “critical race theory” and “ethnic studies” into the new toxic wedge issues of our time to expand their power and hopefully defeat Democrats.

Until recently most people had never heard of critical race theory (CRT), but this emergent legal paradigm has been informing our social and political institutions and structures for over 40 years as they endeavor to become more equitable. CRT originated with the renowned lawyer, professor, and civil rights activist Derrick Bel in the 1970s, while the pioneering legal scholar Kimberlé Crenshaw most notably represents the field today.

Simply put, CRT posits that racism is a historical feature of American society embedded in its legal structures, social systems, and political institutions. Racism is not merely a mindset of the past or a matter of residual individual bigotry but, more significantly, is best understood as systemic and structural subjugation woven into the fabric of society. In recent decades, many of our institutions and workplaces have been encouraged to reckon with the durable vestiges of historical racism and, increasingly over the years, many have taken up the challenge.

These efforts are now completely under attack by the radical right — composed primarily of Christian Nationalists and neo-liberals. Conservative pundits and politicians have launched a malicious campaign to discredit and derail the historical and racial reckoning that has gained traction in recent years. Their tactic: using CRT as a dog whistle to rally the masses against any and all efforts to examine American history honestly or to work toward a more equitable and inclusive society. They routinely and grossly misrepresent CRT in speeches, podcasts, and newscasts and, in a particularly cynical twist, claim that Whites are now the new victims of racism.

How did it come to this — conservatives placing the blame for racial polarization and hostility on CRT and its adherents? Their strategy has been to invalidate and deflect attention away from the real culprits – most notably, the killing of Black folks. The murder of Trayvon Martin in 2013 spawned the Black Lives Matter movement. Its ranks swelled with the death of Eric Garner at the hands of police, then Michael Brown, Philando Castile, Breonna Taylor, and countless others, to the most egregious recent case, George Floyd. (And since this article was written, tragically, another name must be added to the list, Amir Locke.) The relentless and graphic devaluation of Black lives the past decade — much of it vividly recorded — galvanized a flagging racial justice movement.

In the meantime, academics continued to produce new historical scholarship and write more books about racism (influenced no doubt by CRT and the BLM movement), while racial justice activists, community leaders, and workplace HR departments ramped up their diversity training and/or anti-racism programs. A renewed effort to combat systemic racism and implicit bias had seized much of the country. Shame and guilt were never anyone’s aims, only truth and reconciliation, but nonetheless backlash ensued.

Case in point: the conservative crusade to storm school board meetings and deliver their hyperbolic grievances is well under way, with many state legislatures eager and willing to statutorily enshrine their concerns. Conservatives are notorious, of course, for politicizing the school curriculum. Whether trying to prohibit the teaching of evolution, ban controversial books, demand the primacy of “classic” English literature in the classroom, scrub the social studies curriculum of “revisionist history” (those unpleasant truths about America’s past), or censor educators for teaching about bias and diversity, conservatives have a well-earned reputation for being the curriculum police.

Not surprisingly then, the emergence of “ethnic studies” in America’s classrooms has become a corollary flashpoint for conservatives — one that Republicans in Minnesota have currently flagged with the pending adoption of the new social studies standards. (This update is undertaken once a decade by the Department of Education.)

Here in Minnesota, ethnic studies are to become a fifth “strand,” or focus, among the social studies standards beginning in 2026.  Having been introduced in schools across the country in recent decades, ethnic studies provide a more culturally relevant curriculum for our increasingly diverse student population. In addition, this curriculum will expose all students to the history, contributions, and challenges of the full range of American experiences that now comprise our country. Such courses will better prepare our youth for their work and civic lives.

Truthful and inclusive history does not teach students to hate America or hate Whites — as conservatives contend — but helps motivate students to take their education more seriously and inspire them to work together toward the best of American ideals. When they see people like themselves represented in the curriculum — not just as victims but as actors in America’s story — students get much more engaged. And all learn that America is a work in progress reliant upon an active citizenry. This proven pedagogy has been driving social studies reform more and more in recent decades. I can attest to its efficacy from my years of teaching in New York City public schools.

The conservative playbook is to divide and conquer. They distort the truth and breed lies using CRT to distract from the more concerning issues of the electorate. Throughout our history, pitting Whites against Blacks has always been an effective means of keeping poor and working-class people divided lest they join together to fight for economic fairness in the workplace, e.g., better wages and expanded benefits. History teaches us that America’s economic elites have always reinforced their power by maintaining a racial hierarchy to fend off populist economic movements. This strategy effectively derailed Reconstruction and branded the Jim Crow era, and it can work again now.

Joe Biden is right – we are in a battle for the soul of America. With demographic change inevitable, conservative politicians are afraid of losing the power they inherited from their ideological forebears at America’s inception. They are intent on promulgating a sanitized version of history that ignores or rationalizes genocide, racial oppression, and corporate power. Stuck in the past, they are no more than propagandists who glorify America’s past political, social, and economic winners, discounting authentic historical scholarship.

This conservative radical minority disavows society’s efforts to reckon with our racist history. These elites serve their own interests by blaming the victims of racial injustice and denying the structural and systemic problems that endure. They employ those time-tested strategies of race-baiting and disinformation to keep as much of the powerless and disaffected White population within their clutches as possible. It’s their last best hope to try to retain control of a country in flux.

Many of us as humanists have championed racial justice because of our values – it’s the right thing to do. But it’s also in everyone’s best interest. The multicultural, multiethnic world of the future is upon us right now, right here in America. A well-functioning democracy requires that all its citizens have autonomy and agency to participate fully and have access to the halls of power.

At the close of her book, The Sum of Us: What Racism Costs Everyone and How We Can Prosper Together, Heather McGhee asks: “Who is an American, and what are we to one another? We have to admit that this question is harder for us than in most other countries, because we are the world’s most radical experiment in democracy, a nation of ancestral strangers that has to work to find connection even as we grow more diverse every day.”

Surely we aspire as humanists to join in common cause with Black, Brown, and White folks throughout the country to repair our flawed systems and create a more equitable and inclusive society.