A Call for Humanists to Again Address the Question of War: Part One 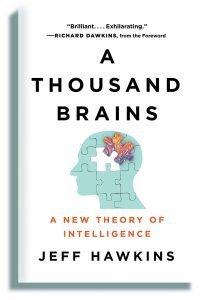 Let me start by stating that A Thousand Brains by Jeff Hawkins is likely the most profound and engaging book on neuroscience that I have ever read. That is because it is more than just neuroscience; it is an attempt to present a new theory of brain function to a general audience and then extrapolate to what it means for the future of the human race.

Hawkins’ goal is to appeal not just to other neuroscientists, but also to the layperson who wonders where our intelligence, or even our consciousness, comes from. As such, he gives us enough information to understand what has been learned in the last couple of decades about brain structure but does not dwell on the detailed chemistry that other neuroscience books devote many pages to. (I.e., it is enough for you to know what a neuron or synapse is/does, without knowing the various molecules or the interactions involved to perform their functions).

Along the way, Hawkins shares with us the journey that he and his team of researchers took to get to this theory. However, he is careful to point out that there are still many details and experimental results that must be filled in before it becomes a truly confirmed theory (à la evolution). Many times he refers to it as a “framework,” but one that he has much confidence in.

Before getting to the particulars, it is important to understand Hawkins’ background. His original degree was in electrical engineering and he initially worked at Intel. However, he was always fascinated by the brain and how it functioned. So, inspired by an article by Francis Crick (of DNA fame), he explored working in a doctoral program that would encompass an overall theory of brain function. He applied to and was rejected by a number of institutions either because the brain was already just thought of as a computational machine (MIT’s Artificial Intelligence lab) or the project was too ambitious and he would not accomplish enough in the requisite time (typically five years) to successfully get his doctorate.

Discouraged, he went back to electrical engineering and, with others, founded Palm Computer Inc. – and made a lot of money. After 10 years he decided to go back to his primary love, neuroscience. He gracefully resigned from his company and in 2002 created the Redwood Neuroscience Institute, a collaboration of a number of university neuroscientists interested in working on brain science. However, he soon found this arrangement unworkable, since most of the professors had their own ideas on what they should work on, rather than a common goal.

So after three years he turned the Institute over to the University of California, Berkeley (who had rejected his thesis proposal a decade earlier!) and founded Numenta, his private independent research group, staffing it with bright scientists committed to his vision. Besides their own research, studies, and computer simulations of the brain, Numenta served as a focal point for conferences and a meeting place for neuroscientists from all over the world to come, share data, and discuss.

The book is divided into three sections. Section I, “A New Understanding of the Brain,” discusses the new theory, how it differs from existing theory, and how it better explains the myriad of data that scientists have discovered and published over many decades of neurological research. Existing theories treat the brain as a purely hierarchical structure with information coming in from the various senses and then being transferred up to higher and higher levels, becoming more detailed and complex at each level —almost like the design of a computer, as is the structure of today’s AI systems.

However, for Hawkins, the human brain wasn’t “designed”; it has evolved from lower forms. There is some hierarchy, but that is not the whole story.  A fundamental “old” brain,  which all lifeforms have to some degree, handles basic functions (movement, digestion, aggression, sex, etc.). A “new” brain, i.e., the neocortex, evolved because thinking is helpful for finding food, avoiding predators, and living long enough to procreate.

In fact, the main difference between the “higher” and “lower” order animals is the size of their neocortex (in Homo sapiens, it is about 70 percent of brain volume). Whereas the “old” brain is composed mainly of distinct organs with unique structures suited for different functions, the neocortex is composed of hundreds of thousands of “cortical columns” (each can contain thousands of mini-cortical columns). Although each is a very complex layered structure, are all pretty much the same structure, repeated many times.

Furthermore, the neocortex, once established, did not grow vertically (layered) from lower species to higher species but laterally (area wise) — hence the folding structure of our brains, where more material needs to be squeezed into a solid cranium whose volume did not grow as quickly. It’s as if it was easier from an evolutionary point of view to simply duplicate and add something that appears to work, rather than “invent” something new all the time. (It should be noted that these columns also exist in parts of the “old” brain. There is continuity in evolution at work here!)

It has been known for some time that the brain is a memory prediction machine. Through constant learning, it makes a model of the world, instantaneously updating the model as the world changes in time and the senses deliver the changes to the brain. The same is true for higher-level concepts such as language, music, mathematics, etc. This model is the basis for our predictions, perceptions, and actions.

It has also been discovered that map-creating neurons exist in the hippocampus and entorhinal cortex in the “old” brain. In 1971, “place” cells were identified that permit the brain to recognize what things are. Then, in 2005, “grid” cells were identified that permit knowledge of where things are (with respect to a reference, of course). Similar types of cells exist in the cortical columns of the neocortex. The existence of these cells implies that brains can create reference frames of what things are and where they are with respect to the body.

The cortical columns provide the mechanism for this, creating reference frames that have retrievable knowledge stored in them. Furthermore, it was discovered that knowledge of an item is stored in thousands of complementary columns, but not necessarily redundantly since information is coming to the columns from different sensors via different neurons.

This leads to the “binding problem”: how do inputs from the different sensors combine into a singular non-distorted perceptive experience? Hawkins’ answer is that the different columns develop a “consensus” via “voting” neurons, who send information on their axons out to other columns. The excitations quickly settle to a stable configuration which is what we perceive.

In part II, Hawkins discusses “machine intelligence.” He notes that what currently passes for AI has no real I (intelligence). To be intelligent, the machine must be able to learn continuously, not through endless training, as current systems require. His definition of intelligence is “the ability of a system to learn a model of the world” (reality). For this to happen, he proposes it must learn the way the human neocortex learns. Current AI systems are basically “one-trick ponies,” able to do only the task they were programmed or taught to do.

Hawkins also tackles the presumed existential threats to humanity that are frequently ascribed to future intelligent machines. This is not about bad people using AI to destroy civilization but the possibility of AI itself being a bad actor. He points out that the reason people can be bad actors is not because of intelligence (the neocortex) but because of adaptations in the “old” brain that evolutionary pressures created to assure survival for pro-creation of our genes. That is, humans have goals because the “old” brain created those goals. Intelligent machines will only have the goals we give them. It is up to us, the designers, to not give them human-like emotions. Unless we deliberately give our future AI machines those “old” brain goals, there is no reason to believe they will deliberately become bad actors.

In Part III, Hawkins discusses “Human Intelligence.” This, he believes, is where the real existential threats to human survival exist. For 3.5 billion years, life has been driven by basic evolutionary pressures: competitive survival and procreation. Human intelligence has allowed Homo sapiens to flourish and succeed. However, the recent rapid rise in technology and scientific discovery has led to significant existential risks, the most significant being nuclear war and severe climate change.

For Hawkins, these existential risks arise due to two fundamental systemic risks built into our brains. First are the risks associated with the “old” brain: the part of our brain that harbors many short-sighted behaviors that were useful for gene procreation/survival but not necessarily desirable for assuring the future of humanity. He asserts that human-caused climate change is primarily due to overpopulation and the amount of pollution created per person.

Second are the risks associated with the neocortex, notably the creation of false beliefs. These false beliefs are created because the brain can only know a subset of the real world, what we perceive, since our model of the world is not necessarily the real world itself. We live in a simulation that our brain has created over our lifetime and this model can be wrong. Furthermore, cultural memes, such as religious beliefs, can spread some of these false models because they have evolutionary advantages. These false beliefs can convince large segments of the population that climate change is not real, or that an afterlife exists where one will be spared if any calamity happens on this earth.

In the final chapters, Hawkins discusses various options put forth to either extend humanity’s reign or at least preserve our collected knowledge for future civilizations so that our existence will not be forgotten in the endless breadth of time. If you are a science fiction fan, you will have encountered most of them and Hawkins discusses their viabilities in great detail. I will leave that for the reader to discover.

All in all, A Thousand Brains, is a well-written, informative, mind-opening read. I highly recommend it.