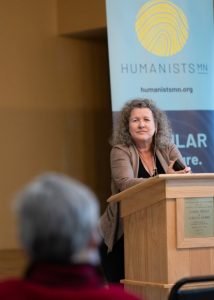 To solve our most pressing problems, we should move toward the more collaborative style of leadership practiced by women, Mikki Morrissette, publisher of the Minnesota Women’s Press, told our October Community Gathering.

Instead of leadership that is based on “taking charge” and “conquering heroes,” she said, let’s promote a  model that recognizes it  is “not about being a director but being part of a community.”

Morrissette highlighted women who are working together,  often at the grassroots level, to get things done.  If women had ruled the United States from the start, she asked, might history have evolved differently in areas like relations with indigenous people, slavery, the war on drugs that sent so many Black people to prison, and the consolidation of farming at the expense of small farms?

Would we focus so much on stepped-up policing in place of violence prevention and healing trauma? Would the average pay of caregivers be less than $10 an hour? Would gender-based violence be so extensive?

She said she doesn’t claim that all women have more egalitarian values. “But in general, women do tend to be trained as collaborative caretakers,” she said. “It is long past time we have much more of that kind of leadership.”

Morrissette’s presentation was was live-streamed over YouTube. You can watch a video of the presentation here.