A Tribute to Kerry Lund and Gene Kasmar 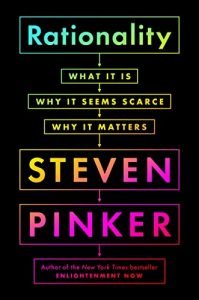 Steven Pinker is one of my intellectual heroes. I have read and benefited from his previous work on language (The Language Instinct, Words and Rules), cognition (How the Mind Works, The Blank Slate), and human progress (The Better Angels of Our Nature, Enlightenment Now). I share his disdain for the post-modern relativism that has debased so much of academia, and agree with his attribution of humanity’s progress over the past 500 years toafre humanism — understood as the reason-and-evidence-based worldview that came into prominence with the Enlightenment.

So I looked forward to reading and reviewing Pinker’s latest book, Rationality: What It Is, Why It Seems Scarce, Why It Matters. The book begins with two chapters that demonstrate the ubiquity of human irrationality and make a preliminary case for the value of rational thought. Its concluding twoFre chapters address the last two subtitles, explaining why rationality is scarce and why it’s needed for our individual and collective flourishing. Most of the book, Chapters 3 through 9, “explain the most widely applicable normative tools of reason,” techniques Pinker regards as the keys to rational thought.

This seems promising, does it not?  Alas, while Rationality is engaging and well-written— replete with the memorable examples, humor, and clever comments so characteristic of Pinker’s prose — ultimately, the book was disappointing.

Dictionary definitions of “rationality” center on the use of reason, being reasonable, having good reasons for one’s beliefs and actions. This focus is reflected in teaching and research on critical thinking, which includes logic (deductive reasoning), practical (non-deductive) reasoning, reasoning mistakes (fallacies), and argumentation. Rationality’s third chapter addresses some of these topics.  It includes a nice primer on deductive reasoning, but a poorly developed review of important fallacies, and virtually nothing on non-deductive reasoning or argumentation. So with the exception of “deduction,” reasoning receives little attention and clearly is not central to Pinker’s notion of rationality.

(*See footnote for further discussion of deductive and non-deductive reasoning.)

What is central is an alternative view of rationality developed in the social and behavioral sciences, especially economics and some parts of psychology. I learned this “rational person” account of human behavior while earning a PhD in Decision Sciences. It attributes rationality to people who choose courses of action that are most likely to provide them with maximum satisfaction. Since one rarely knows what outcomes will result from decision alternatives, decision makers must rely on probabilities, sometimes based on statistical data.

Various formal methods have been developed to assist decision makers in such situations — Bayesian statistics, expected utility theory, statistical decision theory, and game theory, among others — these being the “tools of rationality” that occupy most of Pinker’s book.  In a way this isn’t surprising, given that Rationality is based on a course Pinker teaches to Harvard undergraduates: Intelligent students, and many academic colleagues, are impressed by the rigor of formal, mathematical methods.

It isn’t that these formal decision methods are wrong, but rather that they rarely apply in real-world situations. For instance, few major corporate decisions — involving, say, the introduction of innovative new products or acquisitions of other companies — are made with these tools.  We use them even less frequently in our personal lives. Why? Because real-world decisions call for case-specific information, not the generalized “base rates” used in Bayesian statistics and other such methods.

A would-be entrepreneur might know that less than 20 percent of new business ventures succeed, but she would never accept that base rate as the likelihood that her proposed venture will make money. Statistical information can be useful in medical decision making — “This operation has a 93 percent probability of being successful” —but that’s typically not the case in the unique, highly individuated, situations faced by organizations and individuals.

The other “reasons-based” rationality that Pinker largely overlooks is taught in critical thinking courses and addressed by academic research on practical (non-deductive) reasoning and argumentation. The work of Douglas Walton is exemplary. Unlike deduction, practical reasoning has no “truth guarantee” and is highly varied, encompassing induction (reasoning from specific instances to a general conclusion), abduction (inference to the best explanation), similarity-based reasoning, and causal reasoning, among others.

Since Rationality doesn’t address these kinds of reasoning, it fails to point out the mistakes to which they are vulnerable. Thus, the fallacy of “hasty generalization” denotes our tendency to reach broad general conclusions — “Republicans are racists” — based on small or nonrepresentative samples. Our tendency to reason based on similarity is vulnerable to the fallacy of “false analogy,” overlooking important differences between the things being compared.

Former President Reagan once asserted that federal government spending could be reduced by cutting taxes because the government was like a child whose spending would go down if his allowance was reduced. Reagan’s ridiculous analogy failed to note that, unlike children, the federal government can borrow or print virtually unlimited amounts of money. Rationality provides its readers without any tools for critiquing Reagan’s argument.

Causation and the Poor Reasoning of “Guns Don’t Kill People; People Do”

The book’s chapter on causal reasoning, an important type of practical reasoning, demonstrates its shortcomings. Entitled “Correlation and Causation,” the chapter rightfully addresses the serious mistake of inferring a causal relationship between two variables that are statistically correlated.  It goes on to discuss the challenges researchers face in generating and interpreting empirical data that might allow them to identify the causal relationships with which science is so centrally concerned.

The chapter includes a brief discussion of causation itself, within which can be found complications like the distinction between causes and conditions: A condition is an enablement (oxygen and flammable material) that is necessary but less active than the cause (a source of spark) responsible for an outcome (one’s house burning down). But lacking development, Pinker’s discussion would not enable readers to recognize the poor reasoning in a common, bumper-sticker argument against gun control: “Guns don’t kill people; people do.” Yes, people are the cause of these deaths, guns being a condition or enablement. But sometimes, to prevent an outcome, it may be easier to control a condition (the availability of guns) than to control the cause (the angry and irrational behavior of people).

Rationality correctly identifies confirmation, or my-side, bias as a pervasive cause of poor reasoning: We look for evidence that is consistent with our initial beliefs and ignore or misinterpret data that could challenge those beliefs. An equally harmful failing receives scant attention:  We habitually “jump to conclusions,” inferring too strongly on the basis of limited information.  Surprisingly, given his knowledge of linguistics, Pinker barely mentions the role of language in thought and the ways language can mislead.

Thus, there’s no discussion of conceptual vagueness, the lack of clear boundaries for most of our concepts, and the way this gives rise to “conceptual stretching,” applying a concept far beyond its normal meaning. In today’s partisan political environment, most of the people accused of being “socialists,” “racists,” or “fascists” are victims of conceptual stretching.

Why Is Irrationality So Prevalent?

The most valuable parts of Rationality are its concluding two chapters. Chapter 10, “What’s Wrong With People,” explains why irrationality is so prevalent. It cites two of the “usual suspects” — motivated reasoning  (evaluating arguments in a biased way to support a preferred conclusion) and my-side bias. But Pinker makes a strong case for another, less widely recognized, cause of irrationality: Many people “divide their worlds into two zones,” an everyday world of physical objects in which one’s beliefs are intended to represent reality, and a “world beyond immediate experience” in which beliefs are untethered from reason and reality since they satisfy non-rational spiritual or mythological needs.  This is why people cannot be argued out of religious beliefs that aren’t accountable to reason or evidence in the first place.

Explaining “Why Rationality Matters” in Chapter 11, Pinker highlights influential historical arguments against religious persecution, cruel punishment, slavery, and the oppression of women. Ironically, while some of these arguments employ an informal version of cost-benefit analysis, none use the formal “tools of rationality” Pinker promotes in his book.  They instead rely on the non-deductive reasoning we do in everyday affairs.  For instance, he cites Jeremy Bentham’s argument against cruelty to animals, an instance of similarity-based reasoning: If we protect human beings from suffering, even those who cannot reason or talk, should we not do the same for animals that are also able to suffer?

So, while Pinker has done humankind a service by promoting rationality, he mostly misses the mark in explaining what it involves.

*A primer on deductive and non-deductive reasoning:

Deductive reasoning/logic: The key to this reasoning is the “x implies y” premise, also expressed as “If x, then y.”  For instance, if it’s snowing outside, we can confidently conclude that it’s 32 degrees or colder. Known as “logical implication,” this premise must be absolutely true, without exceptions. In practical affairs, such relationships are rarely found.

Non-deductive reasoning: This lacks deductive reasoning’s truth guarantee, so yields conclusions that are fallible, or potentially mistaken. Consider this argument: “President Biden’s approval rating is quite low. So he’s not likely to be reelected.” This premise is based on a likelihood, not a certainty.  In fact, presidents with low approval ratings after their first year in office  — for example, Ronald Reagan in 1981 — have been reelected.

Jerry Smith is a member of the HumanistsMN Board and co-leader of the D-Cubed discussion group.