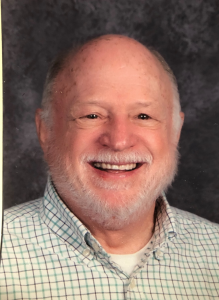 Profession/Residence: I was an educator for 46 years, the bulk of them spent working for The Blake School in Minneapolis as the Director of College Counseling and a member of the Social Studies Department. I most recently taught AP U.S. Government and Politics, U.S. Constitutional Law, and a variety of American History electives. I retired from Blake in 2019 as Faculty Emeritus. I was raised in St. Louis, Mo., and attended the University of Missouri, where I received both my degrees. I have been a resident of Minnesota since 1976, when I was hired to teach in the Roseville Schools. My wife, Chris, and I have lived in Apple Valley since 1981.

How he discovered us: My friend Rick mentioned humanism to me and brought me along with him to a few presentations on social issues that we both found interesting, Along the way, he introduced me to several people with whom I clearly shared beliefs and political attitudes. So I spent time exploring the HumanistsMN website and found it spoke to me in a manner no religion had been able to do.

After that, Rick introduced me to [Program Coordinator] Audrey Kingstrom, who encouraged me to present on topics of a political, historical, and governmental nature.  By this time, I had begun to attend presentations by others, and found them to be very engaging and enlightening.  [Frank has led a couple of Secular Saturday presentations, one on Presidential Inaugurations and the other on Presidents’ Day.]

What appealed to him about us: The positive world outlook humanists possess and the desire to take action to change our world and make it a better place without having to rely on any religion for guidance appeals to me.

His journey to humanism:  As a child of the 1950s, I was born into a secular reformed Jewish home that did not actively practice Judaism, but adhered to Jewish societal and social norms. I was mostly ignorant as to what it meant to be a practicing Jew. In college, for the first time I was around a significant number of committed Jews and I found that I could not adhere to that religious practice in any sincere manner. I just did not believe.

As a young adult, I spent time exploring both Judaism and Christianity with my wife and children and found neither truly spoke to me. In time I came to accept what I always knew: I am an atheist, and it is my belief that God is a human construct. That this is the life. I realized I did not need religion to be and act as a good person. I have found the humanist philosophy fits nicely in how I have come to see and value the world.