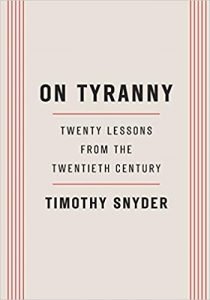 On Tyranny: Twenty Lessons from the Twentieth Century,  by Timothy Snyder

This is a quick read, only 128 pages, packed with signs, actions, and phrases to watch for and stand up against. It’s also a tiny book, only about  5 1/2 ”x 4”, so easy to slip into a pocket or purse.

The lessons are taken largely from the rise of the Nazis:  how they did it, and how the population made it easy for them. Some of the chapters also bleed into our knowledge of the Trump era. For example, did you know that the phrase “fake news” was also employed by the Nazis (in German)? The Germans also voluntarily gave up power to the authorities, teaching them what was possible.  Snyder calls this “anticipatory obedience,” and that happened in the Nazis’ early days.

Finally, even after the Nazis lost the war, many Germans remained in denial of what an evil leader Hitler was, as many now still believe Trump’s every utterance. One man who suffered an amputation in the war expressed his devotion thus:  “He never lied to us.” And so it goes.

This book is so interesting, well-researched and instructive, that I have given it to my three children, now in their forties, for Christmas.  And now, a question for readers:  When is a mother’s job finished?