October 2020: Religious Nationalism and the Threat to Democracy 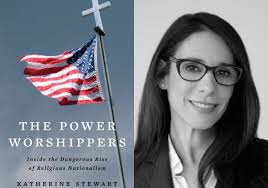 Journalist and author Katherine Stewart spoke about her research into Christian nationalism at our October Community Gathering, warning that the Religious Right seeks to impose a political agenda that is guided by religion, not democracy.  Author of The Power Worshippers: Inside the Dangerous Rise of Religious Nationalism, she said the movement attaches itself to issues like abortion in an effort to consolidate power.

Christian nationalists, Stewart said, have organized a “dense ecosystem” of religious groups, advocacy and policy groups, think tanks, and people in the highest levels of government — and they wield all the machinery of political campaigns. At election time, they transform conservative churches into what are “essentially partisan political cells,” she said. And they make secularists a scapegoat.

Stewart said  every speaker at September’s  Value Voters Summit, which unites conservative religious and political figures, spoke approvingly of President Trump. Evangelist Franklin Graham told the gathering that like them, Trump “has a vision of the country that existed in the 1950s and early 1960s, and he wants that back.” Of course, at that time, segregation, racial discrimination, and gender discrimination “were rampant” and it was illegal to be gay, she noted.

At the same time, there were lower levels of inequality and a stronger middle class in that era. Yet instead of standing up for working families, she said, the Religious Right has allied with libertarian advocacy groups and think tanks, like those affiliated with the Koch brothers, whose economic agenda promotes “the intensification of inequalities.”

What’s at stake with this movement, she said: whether the U.S. will “continue as a constitutional democracy in a pluralistic society united by the idea of a democratic republic.”

Click here to see a video of Katherine Stewart’s presentation.