HMN Author Describes His Journey From Evangelical Pastor to Atheist 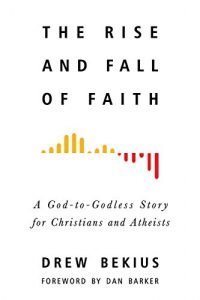 As someone who grew up in a religious household but became an atheist as a young adult, I’m drawn to stories about people who have made similar journeys. In The Rise and Fall of Faith, Drew Bekius brilliantly charts the highs (being true to yourself) and lows (losing connections to people and once-cherished institutions).

His highly readable account is far more dramatic and wrenching than mine. Drew was not simply a believer but a super-achieving, academically trained evangelical pastor. When he finally decided he could no longer reconcile the inconsistencies in the supposedly “inerrant” Bible, he had to walk away from a career and reinvent himself.

“I grew increasingly plagued by the reality that my faith had fallen short of all it had promised,” he writes, “troubled by the realization that this lacking had been covered up by an endless circle of shallow explanations and trite responses. The more I noticed, the less I could deny . . . and the more the unraveling of my faith revealed its hollowed center.”

I discovered  Drew’s book after “meeting” him in a virtual HumanistsMN Social Action Team meeting a few months ago. I learned that he had been president of the Clergy Project, an online support group for religious leaders who no longer believe in the supernatural, and asked if he would write about his journey for our newsletter. While he didn’t then have time to do that, he told me he had written a book that would tell the whole story.

So I ordered it from Amazon. The Rise and Fall of Faith: A God to Godless Story for Christians and Atheists (Pitchstone Publishing) traces Drew’s evolution from high school true believer to student at Moody Bible Institute to ordained Baptist pastor. He loved working with congregations:  visiting the sick, leading Bible studies and teaching classes, starting a coffeehouse ministry, pastoring senior adults, launching a community-service project.

But doubt started creeping in. He discusses a concept that could apply to any of us who are challenged by unsettling discoveries : the “little desk drawer.” The mind’s desktop is reserved for the most pressing matters, he writes, while we shove issues that cannot be easily resolved into a bottom right-hand desk drawer. Out of sight, out of mind.

Until it happens: “The drawer is stuck open and its mess is simply too large to ignore – it now demands your attention . . . And so it’s at this point that you are forced to finally pull out all that little drawer’s contents. You pull them all out and spread them across your desktop. And it’s here where you finally begin to deal with it all.”

Drew was not influenced by reading other skeptics; he simply found he could no longer accept the Bible’s contradictions. The part of the book I found most enlightening describes the tortuous explanations that he and other evangelical pastors came up with to explain the discrepancies  (two different descriptions of the death of Judas Iscariot and different versions from Matthew and Luke of Jesus’s paternal genealogy, as just two examples). We atheists often wonder about believers: how can they fall for the fairy tales?  But the incentives are strong when your professional life depends on it and you lack other marketable job skills.

Drew, who now works as a financial adviser in Minneapolis, is a great teller of anecdotes, which makes for a lively book. There’s the high-school trip to a religious conference in Washington, where because of a scheduling fluke he ends up sharing the Mayflower Hotel with an Israeli ambassador who is working on a peace treaty with Jordan. And the post-pastor job at a steakhouse in Chicago, where after hours he becomes a club hopper.  He writes with honesty about the end of his marriage.

The book aims to increase understanding, rather than provide fodder for wars between Christians and nonbelievers. In fact, Drew hopes it can prompt a conversation between the two sides. His final chapter offers suggestions that we all can follow, whatever our beliefs, including: Try Not to Assume the Worst in Others. Allow Everyone the Space to Think for Themselves. Always Make Time to Be Honest. Celebrate Even in Disagreement.

“There’s so much wonder and joy in this life,” he writes in the latter section. “And it’s even better when it’s enjoyed together.” A poignant message during a pandemic that is keeping us apart.

Read more about Drew in this “New Member Spotlight” feature.