‘Say His Name’: A Protest Diary

In this time of COVID-19, I do not need to shop or get my hair cut or go to the gym.  I do need to risk exposing myself to protest someone’s life being squished out of them like they were an insect while in yet another act of inhumanity. 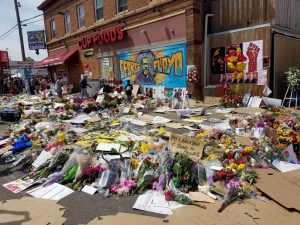 East 38th Street and Chicago Avenue has long been a community center, home to Cup Foods grocery and a number of restaurants and shops.  It looked very different from the usual stream of cars going by when I was there on Tuesday, less than a day after George Floyd was murdered while in police custody.  Hundreds of people were filling the intersection at 5 p.m., the stated start of the protest.

The crowd was both emotional and upset and also doing its best to be COVID-19 safe and distancing (Black Lives Matter representatives were handing out masks).  Though in some ways probably not a conventional, rule-following type of group, they clearly were making efforts to keep the community safe.

There were many emotional speeches by community leaders angry and upset about George, interspersed with call-and-response chants of “Black Lives/Matter,” “Say His Name/George Floyd,” “No Justice/No Peace.”  I noted that the crowd was at least half and possibly more white-skinned people – and made up of people of all ages.  It began to form a line aiming east down 38th street.  I didn’t know there would be a march and didn’t know where it was going,  yet it was time to join in and be visible and heard.  Apparently everyone else in town knew there was going to be a march, because the whole two miles to Hiawatha Avenue was lined with people with Black Lives Matter and Justice 4 George signs, raising their fists in power salutes. Another mile or so traveling up Hiawatha on a road absent of traffic (the city must have been contacted for this event) and over to the Third Precinct police building, still with hundreds of people.

Speakers reminded us why this protest had occurred for yet another black person needlessly killed by police. More loud chants, unifying the crowd.  I saw no police during this time and all was peaceful. At around 7:45 p.m., I left after deciding this group could stay all night but I didn’t intend to, get-to-bed-timely person that I am.  From about three blocks away, I heard a loud boom; this may have been the beginning of damage to the police precinct building.

On May 29, police officer Derek Chauvin was charged with third-degree murder (later upgraded to second-degree). Facebook page Minnesota Protests advised there was a protest at Lake Street and Nicollet Avenue at 1 p.m. on May 30,  which I attended withMarcy Woodruff, co-chair of the HumanistsMN Social Action Team.  Participants called for the three other officers present at Floyd’s death to be charged – and continued to speak out against the police and to honor George Floyd. Time to bring out my standard protest sign: “Treat Everyone as Human & Equal.”  I wish I didn’t have to keep advocating for that. Can’t there be a world when that is how nearly everyone treats each other?  Not yet, apparently.

After parking a few blocks away from that intersection, we walked past the charred, still-smoldering, and rank-smelling blown-out remains of storefronts.  It looked like a war zone, unbelievably in my Minneapolis.  People who had helped clean up in the area were passing by with their brooms and shovels. And some people were milling about, including a man with a sign saying that Wisconsin farmers were in support of Justice 4 Floyd, an unexpected sentiment.  His perspective was that smaller farmers struggle in a world where big money is the driving force, similar to a dynamic that oppresses a range of people.

We eventually saw a moving line of people and got in behind; after marching around the block the crowd gathered at Nicollet Avenue and 31st Street, next to a police precinct building.  Here too were hundreds of people,  trying to be protective, almost all wearing  COVID masks.  Again, the crowd was at least half white-skinned and multi-generational, a continuing sign of solidarity and of the brutality that could no longer be explained away.

Marcy and I staked out a spot under some trees.  We heard speeches encouraging action and reminders of purpose and lots of chants for the 90 minutes that we were there.  Plus another display of unity.  We began to hear drumming and the crowd parted, making way for seven Aztec dancers in their gorgeous costumes and amazing feathered headdresses. (This may be the Kalpulli Yaocenoxtli group.) Their very energetic dancing and drumming for at least 15 minutes raised many cheers of support and applause from the crowd.  Shortly after, Marcy and I left  to join the HMN Zoom discussion group on Justice for George Floyd.

As a member of the Minnesota Association of Professional Employees union (MAPE – a union of state employees), I learned of a protest at Hennepin County Attorney Mike Freeman’s home in southwest Minneapolis.  Because the crowd was only about 150 on this small tree-lined side street, it was much easier to hear the speakers.

Here again protesters demanded that the remaining officers be charged and that George Floyd be honored. In accordance with the labor theme, they also noted that society runs on the backs of everyday people and that those in power often don’t listen.  A range of labor unions were represented, including AFSCME (American Federation of State, County and Municipal Employees), SEIU (Service Employees International Union) and MFT (Minnesota Federation of Teachers).  Later that day it was announced that the case would be handled by Attorney General Keith Ellison.  Whether our two hours of speeches and chants and the many, many chalked messages on the street and sidewalks that likely annoyed Freeman and his neighbors contributed to that decision, I don’t know. Still, it feels essential to raise voices together at an injustice.

I’m very glad that attention is being drawn to the brutality of police around the country and in our city – brutality that is now being highlighted as the lies of officers’ reports are contrasted to videos.  Sadly, there is much more to do.  There is inequitable support and funding for so many areas of society that enable people to thrive – health care, education, criminal justice, and locally owned business development.  May this be the start of something good; we as humanists and HumanistsMN can help. Please reach out to me, Marcy Woodruff, or President Harlan Garbell if interested, or join the activities that are posted on Meetup.

On June 6, I again went to 38th and Chicago.  It looks different yet again,  with thousands of bouquets of flowers and cardboard signs honoring George.  The chant that keeps running through my mind is, “Say His Name/George Floyd. ” May we long remember this human being.

Christine Retkwa is co-chair of the HumanistsMN Social Action Team. You can reach her at SecondChancePartner@humanistsMN.org.