‘Say His Name’: A Protest Diary 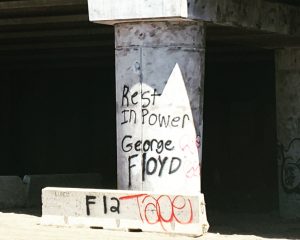 Little wheels spin and spin, big wheels turn around and around

Blame the angels, blame the fates
Blame the Jews or your sister Kate
Teach your children who to hate
And the big wheels turn around and around

Little wheels spin and spin, big wheels turn around and around

The death of George Floyd while in police custody, and the ensuing protests, have shocked our community as no other event since I arrived in Minneapolis in 1994. When my wife and I moved from Chicago into our house near Cedar Lake, we really had no clue as to the historical racial or religious divisions in the “City of Lakes.” We just loved this beautiful city. (Of course, we first came to Minneapolis in May.)

As a newcomer to the Twin Cities, one of the first things I did was watch the local evening news. I figured this was the quickest way to learn about our new environs. What I found surprising was that often the lead news story had nothing to do with crime or violence, unlike in Chicago where the lead news story was almost always about mayhem and murder in the inner city. In fact, it was not uncommon in Chicago for the evening news to have stories about multiple murders with multiple victims- on the same day.

The local news here was often refreshingly benign. For example, stories about the state fair would dominate the news for a couple of weeks in late summer. Co-workers in my office could not stop talking around the water cooler about all the new foods being offered at the fair. And shortly thereafter, the big news was the beginning of hunting season.

It was only after living here in Minneapolis for a couple of years that a clearer Minneapolis came into focus for me. Yes, people here are “Minnesota Nice,” and for the most part that’s true. But there were disturbing undercurrents, nonetheless. I kept hearing stories about long- ago race riots and how rampant anti-Semitism was in Minneapolis. The more I learned about these things the more I realized that this city I lived in had another, much darker, side that was often hidden from view. This was racial inequality and the simmering tension between the local police and the city’s communities of color.

This simmer turned into a rolling boil with the deaths of Jamar Clark in Minneapolis in 2015, and Philando Castile in Falcon Heights the following year. The police shootings of these young black men ratcheted up the long- existing tension between the African American community and the local police. Large protests ensued and “Black Lives Matter” lawn signs started springing up around town. It seemed that the African American community had finally said “enough.”

It was evident that the majority white community finally started to take notice and begin to understand that these killings of young black men were not outliers. It became clearer that these deaths were part of a pattern of systemic, racist policing in communities of color. Many folks in these communities viewed the police as really just the tip of the spear. That the police officers who actually pulled the triggers may have been acting in accordance, expressed or not, with the larger community’s racial attitudes and fears.

Even though some white people may choose to ignore or deny this, there is significant evidence of a disproportionate amount of police harassment, including the number of arrests and police shootings, in our local communities of color. And what is driving this overly aggressive policing are the racial attitudes, fears, and prejudices of members of our local police departments, arguably supported by the majority white community through their assent, whether expressed or not. This assent, perhaps manifested as apathy, is the “little wheel” that allows police misconduct in communities of color to go unabated. But like gears on a machine, this assent, or apathy, also drives the “big wheel” of our unequal social, economic, and political system to “go around and around.”

As we now know, the death of George Floyd at the hands (and knee) of the Minneapolis police caused the whole pot to boil over. The smirking white cop snuffing out the life of a helpless black man in Minneapolis lit the fuse for a growing national (indeed, global) outrage over racial injustice and heavy-handed police tactics.

But people can protest and demonstrate all they want. Nothing will really change unless we are willing to view the police in the same way that they are viewed by numerous folks of color – the white community’s delegated and armed representatives that reflect the fears, attitudes, or apathy, of the larger society.