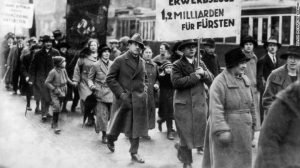 The title of this column is from the famous novel of the last years of the Weimar Republic in Germany, Kleiner Mann, Was Nun? (Little Man, What Now?). Written by Hans Fallada in 1932, it is the story of a struggling family as they try to navigate the years after the stock market crash of 1929, including the early years of the Great Depression.

Rest assured I didn’t read this book because I wanted to. It was assigned reading in my second-year college German language class. And yes, I had to painstakingly read a condensed version of this book in the original German, trying to make sense of those long sentences with a verb at the end of it. Although I didn’t particularly enjoy this experience, the themes of this disturbing novel have stayed with me all these years.

The protagonist is a young man who married his girlfriend after they found out she was two months pregnant. A middle class bookkeeper by trade, the man is let go from his job because of the economic crisis of the time. He then becomes a salesman at a department store, but can’t meet his quota so is again fired. He worries that he can’t provide for his new family and, without employment, he starts sinking into an underclass with millions of other newly economically unnecessary people.

You probably have guessed by now why I am bringing up this book. This fictitious young man reminds me of the millions of newly laid-off or furloughed young people who are victims of this public health crisis. Young people who were already struggling to get their footing in this gig economy – an economy that is now disintegrating.

Even in the best of times, these folks have found it difficult to pay the high rents in major cities, assuming a suitable apartment could even be found. Get a partner and start a family? Not likely when the country is shut down and you may not have the requisite skills anyway for this new, technologically based economy. And jobs that you may be qualified for are being outsourced to China, Mexico, or wherever corporations can find people who will work for less.

Even back in 2009, this country needed a new “New Deal” when Barack Obama was sworn in as president, after the bankers and hedge fund managers drove the economy into a ditch. Yes, we got the Affordable Care Act, the economy recovered slowly, and progress was made fighting climate change. However, in my view, this was a historic opportunity that was wasted. Sure, the Republicans did everything they could to block Obama’s agenda, but this agenda wasn’t nearly bold enough from the beginning. A different, more robust agenda would have provided a vision to give young people hope that they could live in a more decent, fairer America.

As a result, many young people identified with Bernie Sanders’s vision of America in the 2016 Democratic primaries and party caucuses. However, this vision was not accepted by the majority of this country’s Democratic voters. This same outcome occurred in 2020. Quite frankly, the party’s older voters, and especially its older African-American voters, rejected Sanders’s “democratic socialist” agenda. It was perceived as too radical and essentially unrealistic.

However, the time has come when older voters need to realize that we need new policies for a new generation. This country’s social, political, and economic structure must be reshaped or young people, of all races, will become a permanent underclass without hope. If Bernie was the wrong messenger, at the wrong time, elements of his message must be retained.

In my view, the overriding issue in America today is the obscene wealth and power that has been accumulated by the very wealthy in this country, the so-called “one percenters.” And though contrary to some views on the political left, we do not necessarily need to dismantle our current mature capitalist economy to redistribute this extreme wealth to our younger, and less wealthy, generations. We could largely accomplish this through a vigorous rewriting of the tax code, new labor laws and regulations, greater antitrust enforcement, and other progressive legislation. This was done previously in our country and we can do it again.

For instance, a “wealth tax” could fund elements of a “Green New Deal,” where American workers are paid a living wage to upgrade the nation’s infrastructure in a manner that is beneficial to the environment. This could include upgrading the leaky, decrepit system of lead water pipes in our nation’s inner cities. Or perhaps a nationwide project to replace our inefficient, wasteful, and insecure electrical grid.

As we hopefully reemerge from this public health crisis through the development of an effective treatment, or vaccine, for Covid-19, the economic rubble resulting from this crisis will likely remain for years to come. Younger gig economy workers must be given the means and opportunities to thrive as the country rebuilds.

If we fail to accommodate these folks, this new potential underclass may look for solutions, or scapegoats, similar to what happened in Germany in 1932-33. Then, a malignant opportunist was waiting to channel young people’s frustrations towards hatred and violence. Those who claim that this couldn’t happen here may need to read that German novel of long ago. The English version, that is.