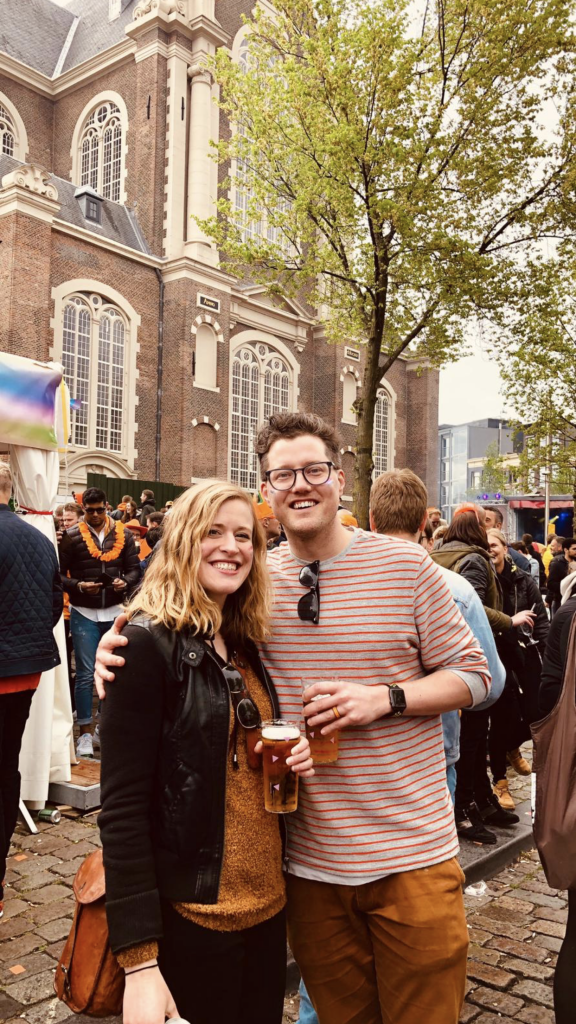 It’s an odd juxtaposition. Imagine the city center of Amsterdam, The Netherlands, March 2019. Tourists from absolutely everywhere in the world bobbing and weaving across the historic hub. On our street, just a few blocks from the notorious, but remarkably commercial, Red Light District, things are tamer but buzzing. Canal tour boats pass periodically, bikers whiz by, and passersby are mostly locals.

One year later: March 2020. A city nearly overrun with tourists year-round has been silenced. The canals empty, the famously overwhelming bike lanes are ghost towns, and there is a general eeriness. I can only imagine that the red lights have turned off indefinitely, though the weed shops are still serving take-away.

My fellow humanist husband, Nick, and I moved to Amsterdam for his temporary work assignment one year ago. From the moment we arrived, we were already preparing for a bittersweet end. We fell in love with the city, our street, our apartment, and the lifestyle immediately. It feels as though part of the adaptation process was finding things that made Amsterdam more appealing than Minneapolis; perhaps it helped alleviate homesickness. But it was not emotionally difficult to leave the Netherlands at all. By the end of our time abroad, we wanted nothing more than to get home.

We’d been slated for months to fly back March 16. I’d been increasingly nervous about COVID-19 since January, and the rapid escalation leading up to our return was unsettling. Five days before our scheduled departure, Donald Trump erroneously announced a European travel ban that had us rapid-fire texting friends and family until 4 a.m. We quickly learned that we’d likely be allowed back as U.S. citizens, but the constantly evolving situation left us afraid of what might happen in a mere five days.

The next day, our flight was cancelled and we were rescheduled for a flight only two days after the original one. Not bad… A few days later, our flight was again cancelled. Thus began the arduous, fruitless task of calling and messaging our airline, KLM, for a new flight. We absolutely understood the unexpected customer-support burden they were experiencing, but it left us in limbo. The U.S. Embassy was clear—they told me via email that they did not have the resources to help us repatriate and we needed to work with our airline or find a new airline. Oh, did I mention the small caveat for us? Our sweet dog, Cosmo, was with us and was only certified to fly KLM.

We spent six days making public pleas. Nick tweeted at Senators Amy Klobuchar and Tina Smith, and documented our struggles in his signature upbeat, hopeful way. We had many friends drum up visibility online, and it turns out that social media isn’t a total wasteland. Nick’s tweets caught the attention of the U.S. Ambassador to the Netherlands. He quickly reached out to Nick with a genuine concern for our situation. Before we knew it, we had the Ambassador, a customs intelligence person, and a KLM security manager calling, tweeting, and emailing Nick. We felt like the belles of the ball. Less than 12 hours later, we had a flight that was only 10 days later than our original one.

Schiphol Airport was good about trying to maintain social distancing with lines. It helped that there weren’t many travelers at this point. I had been anxious about potentially spending the nine-hour flight shoulder to shoulder with others, but our flight was nearly empty. I might even go so far as to say that most passengers were able to maintain a six-foot distance from all other passengers. Jackpot.

Because of the travel ban, only 13 U.S. airports could receive European flights and we had to fly to Chicago. Nick’s sister and brother-in-law saved the day by driving all the way from Minneapolis, picking us up, and turning right back around to drive back. Upon our return, our 14-day self-quarantine began.

If we hadn’t gotten the Ambassador’s attention, we may have found ourselves stuck in Amsterdam indefinitely, hunting for a new place to live with expired visas. That said, we know that our situation was far from dire compared to the state of the world right now. But there was something about being abroad, removed from our families, that left us feeling isolated and vulnerable in a scary time. Leaving the Netherlands to return to the U.S. health care system was not exactly enticing, but it was important to us that we be close to our support system during this crisis.

Since our return, Nick and I have both hit the ground running with work. My job is remote and his can easily be done from home, so we are very fortunate to have little disruption to our professional lives. It’s been a good distraction from not being able to hug our families or have a welcome home happy hour.

Ten days into our self-quarantine (as I write this) —so far, so good.

Ellie and Nick Haylund are members of the HumanistsMN board.