Paying Your Dues Just Got Easier 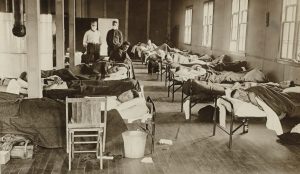 Like many of you I have a fascination with history. Even as a child, I was always curious about historical events and how the future, for better or worse, was shaped by them. For example, one of my favorite television shows in the 50s was “You Are There,” where each week there was a dramatization of an actual historic event, like the assassination of Julius Caesar.

Somehow I intuitively understood early on that history was important to understanding the present. Conversely, as I have aged I have come to realize ironically that you can also better understand the past from living through events in the present.

The coronavirus public health crisis is a good example of this. Yes, it’s a crisis but it is also a unique, albeit tragic, opportunity for people to have a glimpse of the difficult challenges that people faced in years past (and actually, it wasn’t that long ago). In many respects, what we are going through now is a living history lesson of what our parents and grandparents had to endure in their everyday lives.

Think about the gauntlet of contagious infectious diseases a child born 100 years ago had to overcome. For example, my mother was born in 1917. Aside from the common childhood diseases she had to face — measles, mumps, and chicken pox — there were also more deadly contagious diseases like scarlet fever, diphtheria, polio, tuberculosis, and typhoid that killed untold thousands of people each year in this country alone. All without any real cure.

Because there were no flu shots, the common seasonal flu was also prevalent and much more lethal than it is now. In 1918-19, a related disease, the infamous Spanish flu (which actually started in the United States), killed an estimated 50 million people worldwide, including my mother’s own mother. The public health infrastructure in place in those days was very primitive compared to today and ill-equipped to respond. Moreover, many people (like my grandparents), often with large families, lived in tenements close together in big cities where living conditions were horrid by today’s standards. If you survived infectious diseases under these conditions, you were indeed fortunate.

The fear and anxiety we are experiencing today must be very close to what people felt in previous times when an epidemic of infectious disease spread through a village, town, or city. The sheer randomness of these diseases must have made people extremely fatalistic and wary. And before there were scientific explanations for the cause of these maladies, people would often resort to superstition, religious nostrums, or outright quackery as answers to their frightening situation. And, if these proved inadequate, they would nurse their prejudices and blame other groups, e.g. Jews or Gypsies, for their dilemma.

Another historical lesson confronting us now is how our parents and grandparents dealt with a stock market crash and the ensuing economic collapse. The social, economic, and psychological stress must have been severe. I am writing this paragraph on March 17, a day after the largest point drop in the history of the Dow Jones Index Industrial Average. In 1929, the downward plunge on Wall Street ushered in a decade of economic misery as a worldwide depression deprived people of the means to feed their families. Millions of people became desperate and many nations succumbed to the blandishments of political extremists who promised national redemption through authoritarianism and militarism.

Will history repeat itself? How we respond to the challenges of this virus socially and politically will be critical in determining the answer.

However, as grim as those times were economically and politically, the past must also have been replete with generous and unselfish people — folks who were willing to sacrifice and risk their own health and well-being to help others when society started to crack. I know this from witnessing the present behavior of our own friends and neighbors who have contacted us asking if we need assistance in shopping for food, etc., during this crisis. (To be honest, this surprised us somewhat. Then we realized we are probably the oldest people on our block.)

So, yes, the coronavirus is an unfortunate tragedy that has already killed thousands of people worldwide. However, as we navigate this situation together we are getting a real-time history lesson on how people may have thought, felt, and acted during similar crises in the past. Although this particular pandemic is certainly a unique and tragic event, it also provides a window for us to experience the world as our parents and grandparents did.