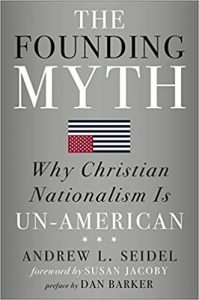 When the U.S. Constitution was presented to the states, some clergy and theologians complained bitterly because there was no Christian foundation in the document, no mention of God or the Bible. Instead it began with “We the people,” allowed no religious test for office, and included the clause on Congress making no laws regarding the establishment of religion.

After the Civil War, a Constitutional amendment was proposed in every session of Congress to make the nation officially Christian. Its backers blamed the disunion and war on the failure to recognize God and the Christian faith in the Constitution. Although the proposal never got out of committee, many religious practices crept into the government and the schools in the ensuing decades.

Supreme Court decisions beginning in the late 1940s struck down many of them. The Religious Right kept losing and eventually adopted a new strategy. They simply claimed that the founding documents were based on the Judeo-Christian tradition and began building support for the day when enough legislators, governors, and judges would agree with them. Now it’s happening. There’s a new surge to make this a Christian nation. It’s called Christian Nationalism.

Secularists have responded. The Founding Myth: Why Christian Nationalism Is Un-American by Andrew Seidel was published in 2019. He builds on Michelle Goldberg’s 2006 book Kingdom Coming: The Rise of Christian Nationalism.  Brian Bolton’s article “The United States Is Not a Christian Nation. It Never Has Been, And Never Will Be” appeared in the December 2019/January 2020 Free Inquiry. Bolton named David Barton as the culprit who had been plugging the Christian founding idea in his pseudo-history for many years. Both Bolton and Seidel identified Project Blitz as a huge grassroots campaign to advance the Christian nation idea. Rob Boston has also covered many personalities and activities of Project Blitz in recent issues of the magazines Church & State  and The Humanist.

A review in the September/October 2019 issue of The Humanist noted that much in The Founding Myth is familiar to humanists who follow church-state issues, but that readers would find some new and interesting observations and insights. I agree.

In her foreword to the book, Susan Jacoby notes how timely it is given that the Trump administration is enthralled with Christian Nationalism. She wrote that Trump “owes his election to the far-right Christian nationalists.”  You may be surprised by that claim, but Seidel backs it up, citing a sociological study that found that the “single most accurate predictor of whether a person voted for Donald Trump in the 2016 election was not religion, wealth, education or even political party: it was believing the United States is and should be a Christian nation.”

In a January article in Religion Dispatches, Seidel writes that in advance of Religious Freedom Day, Trump endorsed the idea of Christian Nationalism with code words. His followers no doubt understood the message and appreciated all that Trump had done for their movement, far more than any previous president.

The Founding Myth examines the claims for Christian Nationalism and finds every one is baseless, utterly lacking in historical grounds and evidence. He devotes many chapters to the Ten Commandments, demonstrating how they conflict with the Constitution. If schools that post the Ten Commandments placed the Bill of Rights beside them, faculty and students could see the conflicts. But many are not aware of them. They are not aware, for example, that official religious slogans — for example, “under God” in the Pledge of Allegiance and “In God We Trust” on coins — come not from the Founders but from times of crisis like the Cold War battle against “Godless Communism” in the 1950s.

Seidel’s research found that even the words “so help me God” in the presidential oath of office did not come from the Founders and were not spoken until the 21st president, Chester A. Arthur, used them at his inauguration.

Seidel repeatedly hammers the founding myth throughout his book. It may seem repetitive, but I didn’t mind. All these claims need to be disproven, and the thesis of the book driven home. Seidel makes it clear that he is a freethinker and an atheist. He is a lead attorney for the Freedom From Religion Foundation in its fight for church-state separation.

Seidel cites the critique by Richard Dawkins of Christianity, with little positive recognition for the liberal, humanistic branch of American Christians. Is it wise to risk alienating those we regard as allies and jeopardize the political coalition of the seculars with liberal religionists?

I was a minister in a liberal denomination, and I can see now that I and others — among clergy, churches, and seminaries — were somewhat weak on church-state separation, although there were outstanding individual exceptions. So I sympathize with the critique, even though I think we need to close ranks with the likes of Americans United for Separation of Church and State, which includes people of faith in its ranks,  and be careful not to offend our allies. We need an enlarged common front against Christian Nationalism more than ever.

Seidel’s book destroys the founding myth with powerful reasoning and evidence. However, this won’t faze Christian nationalists,  even if they read it. They are marching on with more power for their un-American crusade than ever before in our national history. They’ve captured much of our federal, state, and local governments and are making inroads into our schools and the media.

In another alarming new book about this topic reviewed in  The Humanist — The Power Worshippers: Inside the Dangerous Rise of Religious Nationalism — Katherine Stewart writes that the new push for an American-style theocracy is a well-heeled pursuit of power with powerful behind-the-scenes figures. There is no single leader, but instead a broad consensus on a political vision of “capitalistic Christianity.” Stewart says there is a need for progressive faith leaders to counter this. But they lack the people power and the will.

Christian Nationalists may not have a single charismatic leader drawn from the religious world, but they do have one from the business and TV world. Who would have thought that someone who before the 2016 election showed no interest in religion or devotion to religious morality would become the political leader of Christian Nationalism?