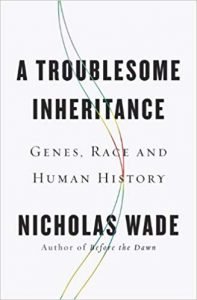 I came upon A Troublesome Inheritance after having read The Bell Curve by Richard J. Herrnstein and Charles Murray (which I picked up because I wondered what the fuss over their book was all about). I was interested to see if anyone had done any follow up.

The Bell Curve was written in the early 1990s based on a couple of large data sets that were available at the time, wherein the authors studied the relationship between intelligence (as defined by IQ) and American class structure. They concluded that IQ (just as other characteristics) is to a significant extent (more than 50 percent) handed down from one generation to the next via genes, and this largely affects an individual’s place in U.S. society.

They made use of sophisticated multivariate regression analysis to isolate the effects of social environment, education, prenatal environment of the mother and, yes, race. Their analysis methods are rigorous and detailed (they take up the first half of a 700-plus page book) and no serious social scientists debates this. If they had stopped there, they would likely not have seen much of a backlash. However, Herrnstein and Murray went on to use their data to explore and pontificate on the value of some of the favorite progressive programs that were put in place to try and eliminate racial and class inequities, such affirmative action, Head Start, etc. This earned the ire of the progressive elite, who proceeded to trash their entire contribution and classify them as racists.

This work was done well before the human genome had been deciphered and certainly before specific differences in people’s genomes could be identified. So, I wondered if any more recent work had been done, based on actual study of the human genome, to underpin a basis for cognitive (or any other neural-based) differences between the races.

This was difficult to find until I came across Nicholas Wade’s book. Wade is an expatriate Englishman, with a degree in natural sciences from King’s College, Cambridge. He is currently a freelance writer and author and has served in science editorial positions at Nature, Science magazine, and The New York Times. He points out immediately in his first chapters that the topic of biological differences between races has been used throughout history to promote the idea of one race being superior to another, and this idea has caused great harm to subjugated populations.

As a  result, a consensus has arisen, in what he refers to as “polite circles,” that human evolution ended in prehistory, that any distinguishable intellectual or emotional differences between the races are culturally imposed, thereby putting a virtual ban on even discussing such differences. Unfortunately for this consensus, science marches on and in the 20 following years a significant amount of work had been done on decoding the human genome. It is the discoveries of these inheritances, and how troublesome they are to the consensus, that is the topic of this book.

Wade spends two excellent in-depth chapters reviewing what has been learned about the human genome and its variations. All humans have the same set of genes, which defines our species (genes are the functional units of our genome). However, the genes themselves may have a slightly different forms, called alleles.

These different alleles can result in different expressions for the same function. Some alleles, especially of genes that control the expression of other genes, can occur at different frequencies in different populations. It is this large number of groupings of identifiable allele differences that permit geneticists and forensic anthropologists to assign humans by percentages into different sub-groups. (These have been labelled AIMS, for Ancestry Information Markers, but are simply a polite way of saying “races”.)

Wade is a storyteller. He does a credible job of describing how the human race spread from Africa to the Mideast, then to Europe and Asia, and eventually to the Americas and Australia. As these populations spread, they became more isolated from each other and their genomes were modified by their different environments due to mutations, genetic drift, migrations, and the pressures of natural selection.

These different environments resulted in different social structures, which in turn selected for traits that better fit into these different cultures. Cooperation, trust, establishment of rules, ostracizing of non-conformance to rules, control of aggression are all traits that differed slightly between these different cultures and are believed to be coded into our genome. The point is that whether these traits are considered good or bad (or superior or inferior) is not an evolutionary consideration. Evolution favors those traits that result in a stable, growing population within that environment/culture.

Wade refers to the establishment of this mosaic of different human subgroups as “The Human Experiment.” Of course, it is an experiment conducted by natural selection with no control groups.  Furthermore, ethical considerations prohibit us from conducting controlled genetic experiments, so determining what trait(s) each of the various genes, never mind alleles, control is a long, arduous, and difficult process.

Furthermore, it is known that most traits are not determined by a single, or even a small subgroup, of genes. Instead they have happened incrementally over time over many genes, with each small modification favored based on a small benefit they gave to the reproductive success of the species in their host’s environment. As  a result, we still do not know what the large majority of our genes actually control. Nevertheless, some progress has been made and Wade takes us through this in great detail.

The second half of the book discusses how the different major civilizations have formed and the characteristics that differentiates them from each other. He gives examples of how natural selection has affected populations in just the past few hundred years and can have some effect even over just a few generations. He especially focuses on the rise of the modern West and how unlikely it was that this would have happened in this way (that’s how evolution works!). The message is that nothing is guaranteed in this vast “experiment” and predicting the future without considering the role of genetics makes no sense. His goal is to urge us to keep paying attention to the science as we consider the past and look to the future.

So, what does all this have to do with humanism? First of all, as humanists, we firmly believe that evolution is real and there is no reason to believe that our environment (and hence our cultures) are not influencing which alleles and codons are being handed down to future generations in greater numbers. Genealogy  has made this clear. Though we do not yet know exactly which alleles affect which cognitive and hormonal functions, enough have been identified to know there is an effect. Though, for example, studies by researchers such as Steven Pinker and Michael Shermer have shown that humanity has slowly become less violent, and this must have impacted our biology to some extent, there are no guarantees that this will continue into the future.

Humanists are still a significant minority, not only in our own culture but in the world at large, and the hope that world-wide community and interconnectivity will somehow bring on a brighter, violence-free world is still only that, a hope. All we can do is keep up the good fight for autonomy, individual responsibility, respect for others and against the forces of populism, autocracy, and slavery.