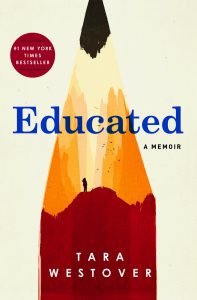 I recently got hold of the bestselling book Educated by Tara Westover. It had been in the queue of books that I keep at the Hennepin County Library website, but something compelled me to read it at this time. Some of you no doubt have read this work or are familiar with its storyline.

Educated is a memoir of a young woman who grew up in a remote valley in Idaho, in the shadow of Buck’s Peak. To say the author had an unusual childhood is a dramatic understatement. Being “homeschooled” in a strict, religious household, Westover later came to understand that her upbringing was actually programmed to crush her spirit as an individual, and particularly as a woman.

She came to this realization only after a perilous life journey culminating in her receiving a PhD at Cambridge University in England. Although I am giving this away too soon, this realization is Westover’s true meaning of the title of her memoir, not necessarily the granting of her prestigious degree.

Westover’s parents were Mormons. But they were not your garden-variety Mormons. They were fundamentalists who believed in the literal truth of both the Old and New Testaments. Her father was also a survivalist who kept a huge underground tank of gasoline so that when the end of the world came, his truck would be the only functioning vehicle in the valley. Well stocked with ammunition, he was not going to go down easily should the government ever come after him for whatever conspiratorial fantasy he harbored at the time.

Westover was the youngest of seven children who were all exposed to a life of grueling and dangerous work in their father’s enormous junkyard in the back of their rural house. The first part of the book reveals a dystopian nightmare of young children trying to avoid life-threatening accidents in the midst of tons of twisted metal and heavy machinery. Unfortunately, accidents were not always avoided, leading to some horrific injuries to family members. These graphic episodes could indeed be disturbing to some readers.

You recall I put homeschooled in quotation marks above. The word is a bit of a misnomer. Westover recalls not really learning anything of educational value from her parents, except enough rudimentary reading skills to learn the lessons of the Bible. Math skills were imparted solely through her father’s instructions to bring two fenders (or whatever) over to him in the junkyard. She was ignorant of history, science, geography, or any other subject not absolutely necessary for her role as obedient daughter and child laborer.

Her father ingrained in her that any behavior not in accordance with the strict tenets of the Bible, as interpreted by him, was sinful and the work of the devil. He would harshly criticize her should she deviate in behavior or speech from anything contrary to his wishes or directions. Her vicious older brother would also mete out physical punishment if she disobeyed his own self-serving instructions. Even more disturbing, although the author was trapped in this fundamentalist, patriarchal nightmare, she internalized the role provided her. She would constantly feel guilty or unworthy should she have contrary feelings or thoughts as a result.

The real heart of this book is how the author slowly manages to extricate herself from this existence emotionally, intellectually, and ultimately, physically. She came to understand that both her father and brother were, in all likelihood, psychotic, and that her intelligent mother was also trapped in this world of unforgiving, hypocritical, righteous patriarchy. Yet, she understands keenly that her life at Buck’s Peak will always be with her, hauntingly, wherever she goes. As if there is a vital and recurring  need within her to analyze and come to terms with her own slow-moving PTSD.

Years later, after her success as an academic and writer, Westover was interviewed by Oprah on her television program. She was asked whether, considering her unconventional religious upbringing, she still believed in a supernatural God. After a few moments quietly pondering the question, Westover responded that she really “doesn’t think or worry about this” anymore.

Interesting. Could this response be a result of her being “educated” as well?