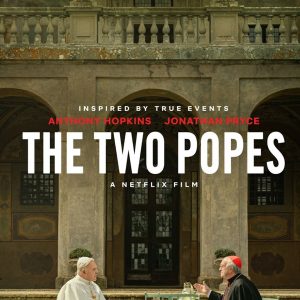 “Two Popes,” a Netflix film, explores the relationship between Pope Benedict and his eventual successor, Pope Francis, after the death of John Paul II.

You don’t have to love the Catholic Church, or be a believer, to appreciate this film. I found it engaging and heartfelt, with sometimes funny, often passionate, and ultimately human dialogue.

We see the two men revealing parts of themselves that make us feel sad, but privileged to know about. The dialogue, of course, is invented, but it feels so true — and based on what we know about them: Cardinal Joseph Ratzinger (who becomes Pope Benedict) is mired in immutable church theology, and Cardinal Jorge Bergoglio (who becomes Pope Francis) reacts to present-day troubles and truth and adjusts his own view of church theology to match.

A bit of history: John Paul II dies, and with him efforts to liberalize Church positions on ordination of women and married men, homosexuality, contraception, etc. In 2005, Ratzinger, who campaigns for the job, is elected by the conclave of Cardinals, but Bergoglio is the runner-up.

Bergoglio is close to the poor of Argentina, most comfortable giving sermons in public squares of poor neighborhoods. He has a mischievous but not mean sense of humor. Although the film didn’t spell it out, the impression I drew is that he was discouraged by Benedict’s election and conservative bent, and after some years have passed, writes to Rome for permission to “retire early,” i.e., before age 75. He would like to return to being a parish priest, where he “could do more for people.”

Surprising him, Benedict replies with an invitation to come visit him in Rome.  Discussions ensue, and yes, they do ramble on, but in a most engaging way. Eventually, this morphs into something between friendship and understanding, but not yet acceptance. Bergoglio repeatedly requests the Pope sign his permission to retire, but Benedict puts him off, occasionally refusing outright, but more often distracting him by changing the subject (a la Trump). Bergoglio returns to Argentina empty-handed.

In 2012, the Vatican is rocked by a huge scandal involving both personal behavior and financial misdeeds.  Benedict seems singularly equipped to resist or deny any criticism of those close to him who serve him well.

Benedict calls his own closest aide “perfect,” but Bergoglio points out that he’s in jail. Later on, Benedict offers this self-condemnation:  his doctor told him, “You’re in good shape for 86, but in bad shape for a human being.”

During an argument with Benedict, Bergoglio says, “Confession cleans the sinner’s soul, but does nothing for the victim,” and, “I don’t agree with anything you say.”

There is a point to these rambling discussions: the Pope is trying to decide whether to retire (which is a possibility, but hasn’t actually happened for over 600 years) or die in office. When he was elected, Bergoglio was the next highest vote-getter (despite his tendency to tell other Cardinals to vote for someone else). He is therefore the likely successor to Benedict.

So Benedict has to choose between two poor choices (in his view): to retire and leave the mother church to a reformer, or to stay and deal with a harrowing scandal. And he is unable to discern “God’s voice” to help him decide.  (These descriptions of his choices are my own, as we never hear anything specific from Benedict’s own mouth.)

Bergoglio tells him the resignation would damage the Papacy forever, but Benedict, with uncharacteristic humility, asks, “What damage will I do if I remain?”  He has wanted to resign for years. As they grow closer, their dialogue becomes even more intimate, and Bergoglio, who had responsibility for the safety of “his priests” in the “disappearances” by the thousands in1970’s under Pinochet in Argentina, orders them to shut down their service projects and melt into the background, but these Jesuits disobey and carry on, and they are rounded up, tortured, and imprisoned.  Hating his role in this, Bergoglio says, “God forgets our mistakes, but I don’t.” Nothing can free him of his regrets.

Along the way, the two become hungry, and Bergoglio orders pizza for them from a place around the corner (unheard of) and later tries to give him a tango lesson. Then he hears Benedict’s confession of transferring priests who have transgressed, and bursts out, “But you knew!,” referring to the abuse of kids by priests.  And Benedict responds that he now hears God’s voice through Bergoglio.

When Benedict announces his retirement, it triggers another conclave, of course, and Bergoglio is elected. He takes the name of Francis, and someone whispers in his ear, “Don’t forget the poor.”

In the end, the two Popes embrace, and in a feel-good moment, Pope Benedict drops his resistance and becomes a real football (soccer) fan with Pope Francis, watching Germany beat Argentina, moving toward Francis in this small but symbolic way.

There is no depiction of an interchange between the two of them after Pope Francis’s election, but we have Benedict’s resignation as evidence that he became comfortable with Francis and his reforming ways.

This is real life, enacted by two outstanding actors at the top of their game.  Anthony Hopkins probably didn’t relish taking on Benedict’s rigid personality, but does it superbly. Jonathan Pryce is heartfelt and believable as Pope Francis, as he reacts with shock at the Vatican’s wealth and profligacy, and above all, its role.  The writing is superb, and except for two feel-good moments, the writer has resisted the temptation to wallow in schmaltz.

Like many humanists, I have little sympathy for the Church’s stand on women, gays, contraception, and other issues, including widespread sexual abuse of children. But in the end, the film shows two human beings wrestling with life choices, regrets, and yearning to discern which path to follow into the future.

If you watch it, and I hope you will, you may find it hard to ignore the lavish perks and palaces. But humanists will appreciate the history of what happened. I, as a humanist, was comforted by the way Pope Francis stood up to power, grew in office, and tried to keep in touch with his “flock.”

He does, after all, lead a band of perhaps billions, and certainly hundreds of millions, so we should be acquainted with him. He’s a major figure in the world and could be with us for a long, long time, since he will never have to face another election.