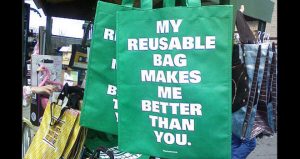 A few years ago, the term “virtue signaling” was coined by a writer in an article in the English publication The Spectator. Essentially, it has come to mean how people communicate through language, or otherwise, to “signal” that they are virtuous. Or perhaps at the very least, more virtuous than you are. This term has caught on and has since been used in articles or discussions about social, cultural, or political issues—usually in a pejorative manner.

An interesting facet of virtue signaling is that it may not actually require doing anything virtuous. For example, anybody can wear a T-shirt conspicuously displaying the message “End World Hunger” in hopes that others think they are a caring and compassionate person. Writing a check to Oxfam, or volunteering at a local food shelf? Sorry, too busy right now.

More often virtue signaling can be more complicated. For example, have you ever been to a party of like-minded, “progressive” people and someone tells you that they just purchased (on the day it was released, no less) Al Gore’s latest book on climate change? Could it be that they are signaling that they care deeply about the environment? Maybe they really do. But perhaps this person also came alone to the party in an oversized SUV and, as another person at the party told you, also has a boat on Lake Minnetonka with huge twin Evinrude outboard motors. Would the former Vice President be pleased with all that carbon going up into the atmosphere?*

Truth be told, virtue signaling has probably been around for as long as human society, as personal virtue is admired in most every culture. Charles Darwin theorized that evolution is driven by the selection in various species of certain traits that are maintained due to their ability to attract mates, the traits signaling overall fitness. This would suggest that virtue signaling, as an indicator of status in society, is a “normal” behavior with an underlying biological imperative.

Interestingly, a couple of years ago I was waiting to get a haircut and picked up an issue of GQ. There was an article about a 30-something bachelor living in Manhattan who got a dog for the express purpose of meeting young women in Central Park. He presumed—correctly, the article implied—that dog ownership would signal an ability to care for and nurture another living thing. In most every culture, this is considered a positive trait. (If this man actually liked dogs, I don’t recall the article indicating as such.)

I suspect that the use of this term may have gained popularity recently as a result of the well documented social and political divisions in our society. As a follower of right-wing media (see my article of last month), I have noticed that conservative media pundits particularly like to feature stories on the hypocrisy of progressive Washington or Hollywood personalities who flaunt their virtuousness while living extravagant lifestyles. Recently, conservative talking heads have taken particular glee in pointing out that film producer Harvey Weinstein, an accused sexual predator, financed and supported various progressive causes. The message being, of course, that liberals often blend self-righteousness and entitlement with brutish, even criminal, behavior.

Although the above example is admittedly pretty extreme (and clearly serves the purpose of reinforcing a shibboleth of its conservative base), could there be an issue with virtue signaling in an organization such as ours?  As a member, you certainly are aware that HumanistsMN is “out there” with its support of environmentalism, social justice, etc. We encourage people to view our website where we conspicuously list “our values,” which include compassion, human well-being, and commitment to the greater good.

Does expressing these values openly convey a type of organizational virtue signaling? My own view is that it probably would only if the organization were not committed to doing what it stands for. However, when humanists pack boxes with produce, meat, and canned goods for the hungry, we are backing up our stated values with action. When we clean highways, or fight for legislation that will relieve human suffering, it is because we actually care for the environment and the well-being of others. Moreover, if we take pride in doing good for others, this is not the same thing as virtue signaling. This is an inward feeling of satisfaction as opposed to an outward communication of virtue. And really, if someone suggests otherwise, should we really care?

As to individual HumanistsMN members, whether you are virtue signaling or not by wearing a HumanistsMN T-shirt is a personal matter only you can determine for yourself. However, if you strive to live and act on your humanist values, I don’t think there should be any reason for concern. So wear your T-shirt at our events with pride. And, yes, even wear it when walking your dog—assuming you love dogs.

* This is obviously a hypothetical situation, but for those of you who are interested, Mr. Gore has a 20-room, 10,070-square-foot estate near Nashville, Tenn. It uses 21 times more energy than the average U.S. household. (National Center for Public Policy Research)