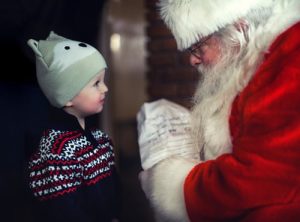 The author delivered this “rant” at HumanistsMN’s Solstice Celebration, a Festivus for the Rest of Us, last month.

Let me start in the traditional Festivus fashion: I HAVE A LOT OF PROBLEMS WITH YOU PEOPLE!

The particular problem I want to talk about today is Santa Claus. Specifically, what I call Santa Truthism, which means telling the Santa story like a true story. Santa Truthism softens up kids’ brains so those brains are susceptible to weird stuff.

What is weird stuff? Weird stuff means astrology, big foot, biorhythms, chemtrails, dianetics, energy healing, foot reflexology, homeopathy, holocaust denial (I’m only up to the letter H!), and a million other make-believe things that too many people believe are true. Santa Truthism creates a confusion of fact and fiction that can last a lifetime.

Children are scientists trying to understand the world around. You see them every day testing gravity with your glassware and their bodies.

For example, my mom used to tell me to eat my soup or it would get cold. She’d say, “Eat your ice cream or it will melt.” I finally asked her, “Please explain: if I leave my food sitting on the table, does it get hot or cold?”

Developmental psychology tells us that at age 3, children can understand the difference between facts and fiction. They can appreciate a story as a story!

I grew up with a lot of stories. My dad was the main storyteller in my family.

He would tell me the plots of old science fiction movies and Greek, Roman, and Norse myths. My stories included The Day of the Triffids, The War of the Worlds, The Incredible Shrinking Man, Pandora’s box, tales of Loki and Thor and Odin. And Elijah stealing a sip of the Passover wine.

My parents made two big mistakes with storytelling and both get back to this idea of making it clear when something is fact or fiction.

I asked my mother why there was sand in my eyes in the morning. She said the sandman comes in my bedroom at night and sprinkles sand in my eyes, and that makes me fall asleep, have dreams, and forget he was there. She said he can get in my room even if the windows are closed.

While my mom may have been picturing the friendly sandman from the old song “Mr. Sandman,”I was processing this a little differently. So Mom, if I understand you correctly, the “sandman” seeps through my walls, puts drugged sand in my eyes which knocks me unconscious and wipes my memory. Do I have that right? She saw this story wasn’t going over well and explained that it was just a story and not real.

The other storytelling mistake was when my dad read me Jack London’s To Build a Fire. I was 8, and it was my dad’s first dive into realistic fiction after all the myths and science fiction he’d been sharing with me. You know the story? A man slowly freezes to death. That’s the story. And my dad forgot to explain that it was fiction. I thought it was journalism, and that the author was following that poor man around while he froze!

In many families it is important to present the Santa story as truth and keep that truth alive for as long as possible. Parents will boast, “Oh, Johnny is 14 now and he still believes in Santa; what a darling!”

Here’s the problem: at the point where a child believes Santa is real, they enter a state I call “any weird stuff might be true.” Reindeer could fly. The world is fair and goodness links to rewards, badness to punishment. Every house in the world can be visited in one night. This creates a lifelong vulnerability to ideas that defy common sense and evidence.

Researchers who studied children’s conception of various realities concluded in an article published in Child Development:  “At age 3…children in their everyday talk discuss the contrasts between pretense and reality.” So I’m asking you, why present Santa as truth?

Stories are great. This time of year, we celebrate stories like the one about an NYPD officer trying to save his wife and other hostages taken by German terrorists during a Christmas party at the Nakatomi Plaza in Los Angeles. Yippee Ki Yay, amiright? And the one about a man raised as an elf at the North Pole who decides to travel to New York City to locate his real father. We even enjoy the story about a suicidal man who abandons his family and loses his family business, which is critical to the local economy, but is ultimately saved by an apprentice angel.

But our brains would suffer if we treated these stories as facts. Let’s enjoy the stories, including the Santa story, and tell children the truth about what is real.

Santa is a fun story and there are also true Santa stories. I have one! It was July of 2011. The setting: a rental car van at the Detroit airport. Sitting across from me was a large man in a bright red vest who had a giant white beard.

I looked him over, caught his eye, and said, “Merry Christmas, sir?” And he said, in a quiet serious voice, “You recognized me.” And he reached into his vest pocket and gave me a coin that reads, “You were caught being good.”

I leave you with this quote from Carl Sagan: “…[T]o find the truth, we need imagination and skepticism both. We will not be afraid to speculate, but we will be careful to distinguish speculation from fact.”

Photo by  Mike Arney on Unsplash

Erica Klein is a HumanistsMN member. She sent this followup:

First, this rant includes fond recollections of my dad, Miles Klein, and Dec. 14, the day of the Festivus/Solstice party, was his birthday. My dad died in 2011 and it was nice to offer this tribute to him on his birthday. I think he would have enjoyed it.

Second, when I first prepared this talk for Ignite Minneapolis (you can see it here), I did some research on the child-development science related to fact versus fiction. I discovered that the primary researcher on this topic, who was cited over and over, was Jacqueline D. Woolley (I’ve included a quote from one of her articles). Well, Jackie Woolley was a friend of mine in college! Small world.