Trump May Be One of the Most Consequential Presidents in U.S. History 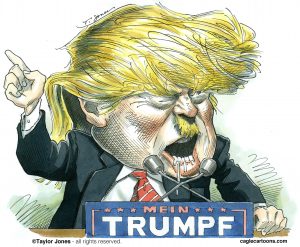 As young students, Americans learn that the most consequential presidents in our history were, generally speaking, George Washington, Abraham Lincoln, and Franklin Delano Roosevelt.

I believe there is a good chance that Donald Trump will also become one of the most consequential presidents in our history — albeit for dramatically different reasons.

Whereas Washington, Lincoln, and FDR all stood at the precipice of history and  preserved the territorial and/or the political integrity of the nation, Trump is now standing at a similar historical junction and is sabotaging the political, constitutional, and moral integrity of the nation. Am I being overdramatic? After all, I have lived through McCarthyism, the Cuban missile crisis, the JFK and other assassinations, Vietnam, Watergate, major recessions, 9/11, Afghanistan, Iraq, and so forth. However,  I don’t think so.

Like most every other American, I have taken for granted the protections of the Constitution. Yes, there have been several efforts in the past to undermine these freedoms but the centripetal forces of our democratic institutions have managed to keep the United States on a relatively even course. However, there is glaring evidence that these forces are coming undone.

What will cause the disabling (or perhaps, more alarmingly,  the disintegration) of our democracy is the hallmark of the Trump era — the institutionalization and normalization of corruption. Yes, this country has always had episodes of corruption (Teapot Dome, Watergate), but the self-correcting mechanisms under our system of checks and balances typically prevailed. Congress, the judicial branch, and a free press (the “fourth estate”) were available to provide corrective measures and punish the corrupt offenders. But what happens when those same institutions become corrupt themselves?

The ongoing House impeachment inquiry has highlighted the latest example of Trump’s corruption — his extortion/bribery scheme to withhold needed military assistance to Ukraine unless the president of that country publicly announced an investigation of Joe Biden. But there are many other examples — for instance, his brazen use of his properties to host foreign governments, which is directly prohibited by the Constitution. And, of course, preceding these scandals was the Mueller investigation into collusion and obstruction of justice involving Russian interference in the 2016 presidential election.

Unless more dramatic revelations emerge from  the impeachment inquiry, there is little likelihood that intimidated (and cowardly) Republican senators will vote to remove from office a flagrantly corrupt president. This makes these senators corrupt themselves as they swore an oath to the Constitution.

The Supreme Court is now a bastion of right-wing ideologues. With the decisions in Bush v. Gore, which handed the presidency to George W. Bush, and Citizens United, which removed restrictions on money in politics, a majority of justices  have distorted the law in service to the outcomes they desired. It is no surprise to anyone who has been following the recent Ukraine scandal that the Trump Administration is refusing to cooperate with Congress until its appeals, based on the theory of executive privilege, get to its handpicked jurists at the Supreme Court.

Yes, there is still a free press, but unlike in past scandals, a corrupt “doppelgänger” press now acts as a handmaiden of the Trump Administration. Fox News, Breitbart, Infowars, etc. spread lies, distortions, and “fake news” to less-informed voters so that they won’t know fact from fiction. Lacking credible information to contradict the pro-Trump narrative, these voters succumb more easily to the clarion call to “make America great again.”

Although this may sound overdrawn and exaggerated, the fact is that Germany in the 1920s and 1930s experienced the same dynamics when right-wing publications (e.g. Der Stürmer) helped usher in an era where truth became a victim to the needs of a corrupt and evil regime.

So Trump could very well be as consequential a president as Washington, Lincoln, or FDR. However, his presidency will leave this country weaker, more divided, and less democratic. The other consequential presidents did just the opposite. But trends can be reversed. We still have elections, albeit not free from gerrymandering and voter suppression. This is the challenge of our times. Are the people of our country up to it?