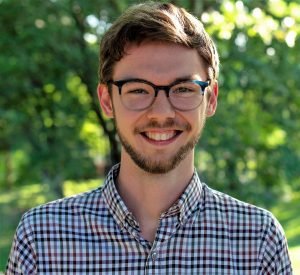 Profession/residence: I can go by several different titles depending on whom you ask. Generally, I say I’m a software developer. To those who know the buzzwords, I’m a DevOps Engineer. To those who really know what’s up, I’m an Infrastructure Engineer. I live in Edina.

How he discovered us: Meetup. After moving out on my own for the first time, I quickly discovered that I needed to get out regularly in order to stay sane, and a couple of friends recommended Meetup as a way to find things to do.

What appealed to him about us: I was already familiar with the concept of humanism through an active interest in philosophy, particularly ethics. Though my feelings about it were generally positive, I had never really thought of myself as a humanist due to a hesitance to throw myself into any particular bucket. However, after about 30 seconds of talking with Christine at my first HumanistsMN event, I quickly realized that humanists were my kind of people: engaged, thoughtful, intelligent, etc. I hope that participating will help introduce me to enthusiastic individuals and their interesting ideas, challenging me to grow in knowledge and curiosity while sharing what I hope are some interesting ideas of my own.

His journey to humanism: I was raised Catholic and went from childhood through confirmation with relatively few doubts. However, as early as middle school, and especially by the end of high school, I gradually grew away from official Catholic teachings and started thinking for myself.

Ironically, by the end of my freshman year at a Catholic university, I realized that I was no longer Catholic nor Christian. I had come to see the Bible as a human creation and traditional theistic conceptions of God as logically incoherent. During this transition toward atheism/agnosticism, I began writing a series of essays (really, it’s a book, but I always felt weird about admitting that for some reason), which helped me think through what I really believed about fundamental questions about reality: What is right? What exists? How do we know? Although I set out with no particular allegiances, the resulting pages would not look too distasteful to many humanists. Thus, considering I’ve felt so at home with HumanistsMN, I’ve come around to embracing the label of humanist.