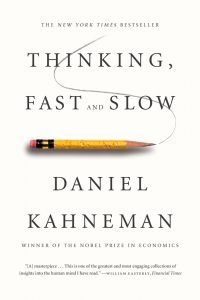 I was introduced to the book Thinking, Fast and Slow by Lee Wetzel at a Critical Thinking Club Meeting a few months ago. Lee is a financial consultant and cited the insights in this marvelous book to describe why investors can make decisions that appear to an outside observer to be irrational, thus contradicting the prevailing economic theories that the stock market is composed of rational actors.

This intrigued me, so I went to the Hennepin County Library system to order a copy, which I received in about three months. (Obviously this book is very popular, even eight years after publication and with 33 copies in the library system, not even counting all the e-book and audio book copies!)

The author, Daniel Kahneman, is a psychologist who has devoted his career to understanding human behavior and especially the field of behavioral economics. He received the Nobel Prize in Economics in 2002 for his pioneering work on Prospect Theory, much of it done with colleague Amos Tversky (who died in 1996 and therefore was not eligible for the Nobel, and to whom he dedicates this work).

This book is a summary of his life’s work. In it, he describes the journey he and Tversky made to develop their theory, describing  their combined thought processes on how the human mind works, the many experiments they conducted which led to their novel insights, and eventually the publishing and acceptance of their theory.

But this book is not simply a story.  Adopting a conversational tone, Kahneman makes readers think about how they  actually think and make decisions. He uses example after example to challenge us on basic decisions that we make in our daily lives. How rational are we, really? Why do we make decisions that are not in our best interests? How risk averse are we?

Kahneman starts by introducing us to what modern psychologists and neuroscientists have learned about the brain and the workings of the human mind. The book gets its title from how we acquire and store our perception of our reality. Fast thinking refers to the intuitive decisions we make quickly and automatically. This “system 1” method was developed via evolution to quickly respond to stimuli that might excite or threaten us. Slow thinking arises from our conscious selves when we focus attention on a problem or issue so we can make a deliberate decision. This “system 2” method of thinking is what leads us to think we are rational beings.

However, the two systems are not independent. System 2 is needed to override our impulses (system 1) and also to train system 1 (think of learning to play an instrument fluidly). But Kahneman notes that system 2 thinking tends to be “lazy” and it is easy for us to default to system 1.  Furthermore, in our subjective view of reality we are subject to WYSIATI (what you see is all there is), an acronym that he refers to throughout the book to explain that the reality we know is only as good as the knowledge we have acquired.

As a result, we are prone to rely on heuristics (i.e. mental shortcuts) and biases. Kahneman goes through an entire array of heuristics/biases, treating us to examples and small tests that are simultaneously entertaining/amusing and, in some cases, disturbing (that we are so easily subject to them!).  These include the availability heuristic, confirmation bias, conjunction fallacy, the affect heuristic, certainty effect, sunk-cost fallacy, the planning fallacy, etc.  (If you have taken HumanistsMN member Jerry Smith’s courses, you will be familiar with many of them.)

Part of this process is that our brains are always looking for patterns and really do not take into account how random reality really is.  As a result, we see intention when there is none. We become overconfident in how much we understand of the world. We rely too much on experts who may have a narrow area of expertise but can easily move out of that area to pontificate on things they know little about.

Kahneman also treats us to the story of how he and Tversky came up with Prospect Theory. In 1970, he was astonished to discover that economic theorists believed that “economic agents are rational, selfish, and their tastes do not change.” As a psychologist, to him it was self-evident that humans do not behave in that fashion. Their limited set of knowledge leads them to behave irrationally, they display at least some amount of altruism, and their tastes are subject to whimsy.

Furthermore, the idea that humans make decisions based on subjective values had been known for quite a while. For example, in the 18th century, Daniel Bernoulli (yes, the same one responsible for mathematically articulating aerodynamic pressure effects) noted in a treatise that a particular change in wealth (say 20 percent) would mean less to a wealthy individual than to a poor one (this is referred to as a utility function). Up to that point, the rational expectation was that it should matter the same to both.

Bernoulli’s theory helped explain much of how commerce and insurance worked. It was so influential and his methodology so precise that it had gone unchallenged for a couple hundred years. However, Kahneman and Tversky saw flaws in the theory and spent the next 20 years studying them. This resulted in Prospect Theory,  which, among other things, showed that how satisfied someone is with an outcome depends on a reference point and must include the human propensity to loss aversion (experiments show that humans are about twice as sensitive to a loss as to a gain). Bernouilli’s theory would have predicted that two individuals in equal financial conditions would be equally sensitive to a 20 percent loss as to a 20 percent gain.

In this short review I certainly cannot cover everything Kahneman has to say  (the actual text is 418 pages!), but let me assure you that it is a pleasant and fascinating read. The last chapter discusses the ways these ideas affect our lives. (I will leave it to the reader to discover the difference between the Experiencing Self and the Remembering Self, or what “libertarian paternalism” is.) He ends with a discussion of how understanding how our minds work can positively affect our lives. We need to be more skeptical of what we know and spend more time using our system 2 thinking.

I, for one, came away with a better understanding of human nature and, hence, a more empathetic feeling toward my fellow humans as they try to navigate their individual worlds. In the end, these ideas can help humanists make more sense of the world and understand why people act as they do.