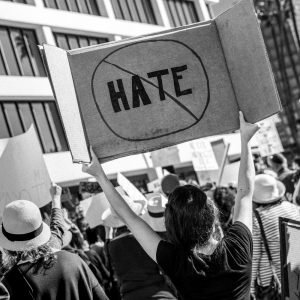 As some of my friends and colleagues in HumanistsMN know, I was born and raised in a Jewish household. When I was a child, my father, the son of recent Russian-Jewish immigrants, would often tell me stories of his own childhood in the mean streets of  Chicago’s West Side during the 1920s and 30s. Many of these stories seemed like they came from a different world. The recurring themes were things I fortunately never experienced: poverty, violence, and pervasive racial and religious discrimination.

The world moved on from those times, however, and looking back on my own life I realize how privileged and sheltered I was. I grew up in a solid middle-class neighborhood and went to good schools. There were no gangs or drugs and everyone I knew grew up in a family where there was always both a mother and father present. And, yes, just about all our neighbors and friends were also Jewish.

Times were great in the 50s and early 60s and the United States commanded the heights of the world economy. I never felt really threatened, or even discriminated against, for being Jewish. Curiously, the Holocaust and the vicious anti-Semitism that pervaded the European continent for centuries were never really taught in the grammar and high schools I attended.

Moreover, Europe, although slow to recover from World War II, was also entering a new era of cooperation, peace, prosperity and religious tolerance. What could possibly go wrong?

About 10 years ago I got a call from my brother. Someone had defaced several gravestones in the Jewish cemetery where my parents were buried. The gravestones of my parents, along with others in that section of the cemetery, were spray painted with swastikas and various profanities. To my surprise, in a couple of weeks the police were able to identify a suspect, who later confessed to the crime after being confronted with the evidence against him. The perpetrator was a young man, a recent immigrant from Eastern Europe.

Since that time I have been particularly attuned to stories about anti-Semitic hate crimes (notwithstanding that I am neither a practicing, nor even an observant, Jew). As many of you know, hate crimes in general, but particularly hate crimes against Jews, have risen dramatically in recent years.

Anti-Semitism has historically been a staple of right-wing movements in both Europe and the United States. Who can forget those neo-Nazis in Charlottesville chanting “the Jews will not replace us” right before one of their supporters murdered someone protesting against their march. And the recent murders at the Tree of Life and Poway synagogues were no doubt fomented by the right-wing echo chamber prevalent in our society.

Also worrisome is the insidious rise of anti-Semitism on the left. The Labor Party in the UK, according to numerous reports, has become a breeding ground for hardcore anti-Semites. Here in the U.S., certain progressive politicians and activists are being called to task for their remarks or activities. For example, a controversy surrounds some of the organizers of the “Women’s March” in 2017 for their close ties to the notorious anti-Semite, misogynist, and homophobe Louis Farrakhan of the Nation of Islam.

So yes, I have lived a relatively privileged life in this country. Mostly, it was a result of the accidental nature of when, where, and to whom I was born. However, history has always played tricks on unsuspecting groups of people during turbulent times. Whether it’s Jews, Kurds, Uighurs, Rohingya Muslims, or others, when recurrent forces of intolerance, ignorance, and racism are on your doorstep you could be at mortal risk.

That’s why it is vital to always vigorously fight back when these same forces are ascending, whether against Jews or other people who have been history’s victims.