The HumanistsMN membership elected a new board at the May annual meeting, including a new president, Harlan Garbell, and vice president, Suzanne Perry. Nick Haylund and David Guell were re-elected treasurer and secretary.

Audrey Kingstrom stepped down as president after five years to comply with our bylaws. She has taken on a new role as program coordinator for HumanistsMN. Find out more about the new board here. See their photos and email addresses here. 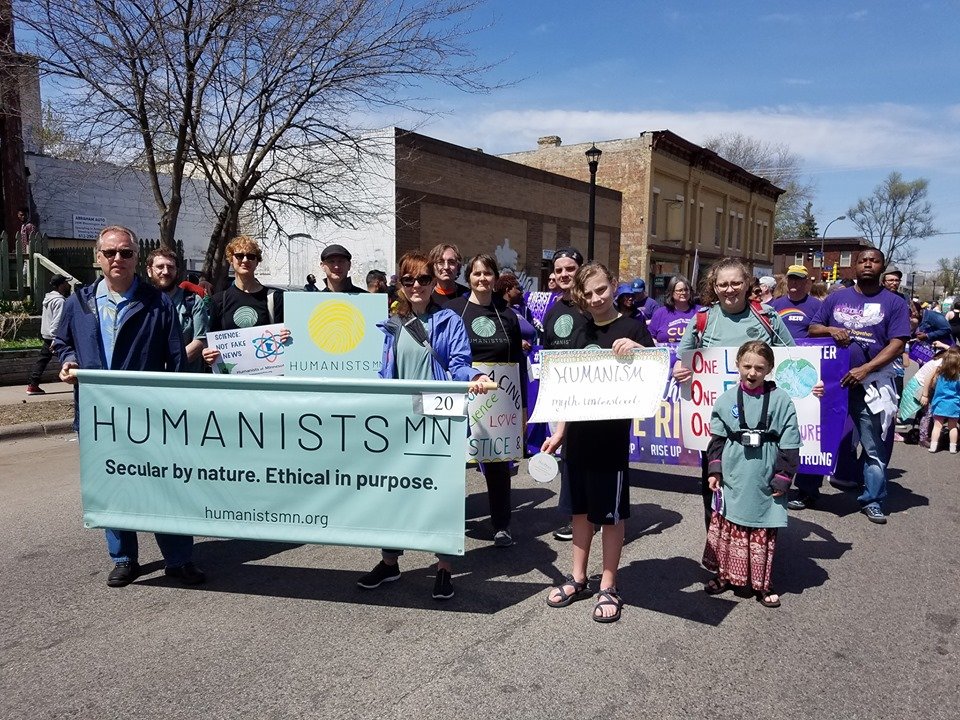 The new HumanistsMN banner, logo, and t-shirts appeared at the 2019 MayDay Parade.

Our new logo and branding were officially unveiled at the meeting. One of our new banners was on display as well as our new promotional “rack card” and membership flyer. We also introduced two new HumanistsMN t-shirts.

Due to our branding initiative, specifically payments for consulting advice and new marketing materials, our finances took a hit this year. Reported income was $11,030 – most of it from membership dues – but expenditures grew to just under $16,000. The Board had decided to draw from our reserves to fund the rebranding costs. We are still in a very solid financial position with total assets at $29, 375 near the close of our fiscal year (May 31).

We had steady growth this past year and our membership now stands at about 220 members, a high point. The membership team continues to explore ways to create a strong sense of community in the organization, support member retention, and encourage membership growth.

HumanistsMN has become more visible in the Twin Cities this past year through social action efforts and community service. In particular, our National Day of Reason Breakfast and Reception at the Capitol on May 4 was a great success. We partnered with First Unitarian Society and Or Emet (Minnesota Congregation for Humanistic Judaism) to advocate for separation of state and religion, evidence-based policy, and inclusive, nonsectarian and shared values in governance.

The annual meeting was followed by socializing, pizza, and drinks. Thanks to everyone who came in support of HumanistsMN.