Professor David Schultz made the following remarks at the National Day of Reason in Minnesota breakfast at the State Capitol on May 2:

Hope is great when it comes to miracles. Belief is terrific when it comes to the Tooth Fairy. But neither hope nor belief should guide the making of public policy to solve our nation’s or Minnesota’s pressing problems, especially now. 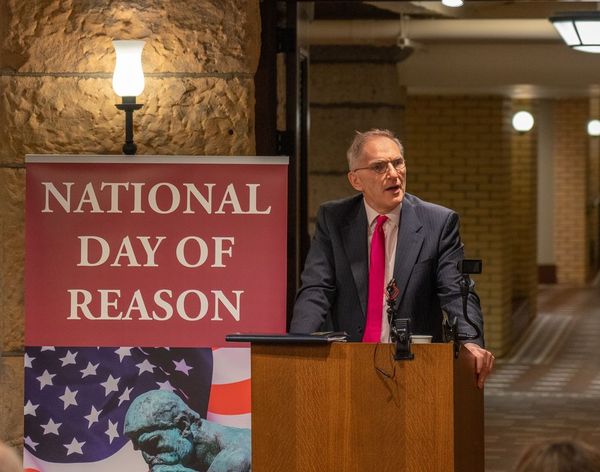 The making of good laws and government programs should be driven by facts and good evidence regarding what does work, otherwise taxpayer dollars maybe wasted.  Unfortunately, often that is not the case.

Senator Daniel Patrick Moynihan once said that all of us “are entitled to our own opinions, but we are not entitled to our own facts.” Unfortunately, in this age of alternative news and false facts, this seems the case. But is should not be so. Good public policy should be based on reason, not hope and belief.

Elected officials often enact failed laws and are captivated by political myths. There is a pack mentality among legislators who often turn to trendy and often untested ideas and the  need for quick fixes to make it look like they are doing something as elections approach or to appease an impatient electorate.

Many elected officials are part time, with limited knowledge, expertise, and ability to gather critical information necessary to make good decisions. Additionally, the power of money in politics, partisanship, special interest pressures, and sometimes simply ideology or even blindness to the facts – often willful – all contribute to situations where so-called new ideas are really recycled old ones already proven to have failed.

In almost every aspect of our lives we are taught to act upon the best available evidence at hand. Successful businesses are guided by data. Sound medical diagnosis demands it. Victorious military commanders need intelligence. Public administrators are taught to use best practices when managing. The public wants government to be successful and do what works at the most efficient price possible. But there is a knowledge gap in American politics. Social science and scientific research, as well as experimentation and past successes and government failures, provide significant evidence regarding what works or not, yet public officials often ignore this information when making policy.

Neither of the two major political parties seems exempt from ignoring facts when making policy. Republicans currently seem particularly prone to make these mistakes. Governor Jon Huntsman perhaps captured it well at the September 2011 Reagan Library presidential debate: “Listen, when you make comments that fly in the face of what 98 out of 100 climate scientists have said, when you call into question the science of evolution, all I’m saying is that, in order for the Republican Party to win, we can’t run from science.”

Republicans seem convinced, despite the best evidence, that tax cuts are the solution to almost any economic ill there is. Or that immigrants are an economic drain on the economy.  Or that voter fraud is rampant, corrupting the integrity of U.S. elections.

Yet Democrats are not innocent.  Despite the best evidence that tax incentives are hugely inefficient in terms of affecting business relocation decisions, they often support them. Or despite overwhelming data that public subsidies for professional sports stadiums or conventions are bad economic investments, Democrats embrace them as tools of job production and revitalization.

Democrats have also joined Republicans in believing that “three strikes and you are out” criminal penalty laws for repeat offenders deter crime, when again the best evidence contradicts this.

Faith, hope, or simply myth and ignorance often describe what the art of politics has become these days.  Evidence-based policy making is what the legislative process should be about. This is why legislators hold hearings – they are supposed to be gathering information to help make better policy.  Instead, the hearings are often charades, with policymakers having already made up their minds and the outcome of the proceedings already predetermined from the onset.

Clearly no one has all the answers. Decisions are often made with limited knowledge, and experimentation is a good idea and way to improve decision making. Yet all this is different from the current practice of simply ignoring what the evidence says. And the evidence does speak loudly. My book American Politics in the Age of Ignorance documents a dozen of the most frequent failed policies and political myths that are repeatedly repackaged and enacted.

* High taxes serve as deterrent to work or business activity.

* Enterprise zones are an efficient means to encourage economic development.

* The building of convention and other entertainment centers are successful tools for economic development.

* Three-strikes laws and mandatory minimums are effective deterrents to crime.

* Immigration and immigrants take jobs away from Americans and serve as a drain on the economy.

For the most part, all of these ideas are false based upon significant evidence. In many cases, enactment or support for these ideas has produced the exact opposite effect from what was intended.

Be warned: Look to see many of these ideas again recycled, proposed, and reenacted again this year in Minnesota and across the country. But the persistence of these failed policies and myths should not be read as a wholesale indictment of government or of democracy.

Government in America has accomplished a significant amount, ranging from putting a man on the Moon, winning two world wars and the Cold War, helping find a cure for polio, and so much more. The list is impressive and often overlooked. The Marshall Plan, the building of the interstate highway system, clean water, sewers, fluoridation, Head Start, the Tennessee Valley Authority, and countless other famous and mundane activities demonstrate the capacity of governments to be successful and make meaningful differences in the lives of Americans.

Yet despite these accomplishments, government can still improve. It can execute better if simply if does what seems to make sense — learn from the past and from the evidence to make future choices better informed.

David Schultz is a professor of political science at Hamline University.