Audrey Kingstrom made the following remarks at the National Day of Reason in Minnesota breakfast at the State Capitol on May 2. 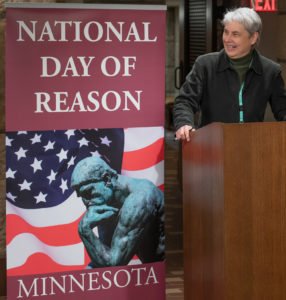 We are here today to reassert the narrative that our democracy, our government, is rooted in secularism. Democracy is a social contract in which the authority to govern comes from the people – not some higher power. A social contract wherein its purpose is to serve the common good.

We are here today to reassert that secular humanism is the foundation of democracy.

Our founding forebears believed –  as do contemporary Humanists – that humans have the capacity, the responsibility, and the agency to govern ourselves. That is the basis of American democracy. It’s fundamentally a humanistic endeavor – not a divine calling.

As a former social studies and civics teacher, it pains me that I should have to state this so emphatically. But the very reason we need to celebrate a Day of Reason is because people and politicians across our country are trying to alter these facts with a counter-narrative about ours being a Christian nation. It’s just not so.

Our authority to govern rests on our ability to use informed reason and verifiable evidence as the standard – the common currency of human knowledge in our decision making. Sectarian religious ideology and pseudo-scientific fallacies have no place in democratic governance. And yet, divisive and faulty ideas are seeping into our public policy deliberations and foiling good, effective government and failing to protect and care for all our citizens.

Our elected officials and civic activists must use the best of tested human knowledge as the authoritative standard in our policy making – just as we require it in our institutions of higher learning and innovative industries across the land. Whether the issue be reproductive rights, LGBTQ rights, climate change, vaccinations, political campaign finance, medical aid in dying, religious displays in public schools, or the value of equity and cultural diversity for human flourishing, the best of human knowledge and experience must be our standard.

Governing is, of course, a moral act. But it is a morality that arises out of our common humanity and yet at the same time respects our unfettered diversity. As the migration of people across the country and around the globe continues unabated (since the beginning of history), now we all must learn to live among people who are different from us. For some, that is causing much consternation, but humanists can help model a new way of living together and governing together.

And even more troubling to some is that along with all the incredible cultural diversity within our own land, we are more than ever a country comprised of people of many different faiths and of no faith at all. Religion, once the bastion of moral authority, no longer holds that revered position. Too often it leads to more division – not just with other countries but within our own country. Hence, our public morality must be based on common human needs and animated by a shared vision for an inclusive, equitable world. A morality where everyone counts and everyone’s voice is heard and respected.

So, on this National Day of Reason, we call upon our public officials to uphold our secular government, to maintain the wall of separation between religion and state, to commit to evidence-based policy making, and to use the moral compass of equity, inclusion, and compassion to promote the general welfare.

This is the essence of democracy and that is what we celebrate on this National Day of Reason.