Humanism: Using Our Own Good Fortune for the Greater Good

‘After Life’ On Netflix: An Atheist Confronts Life With No After 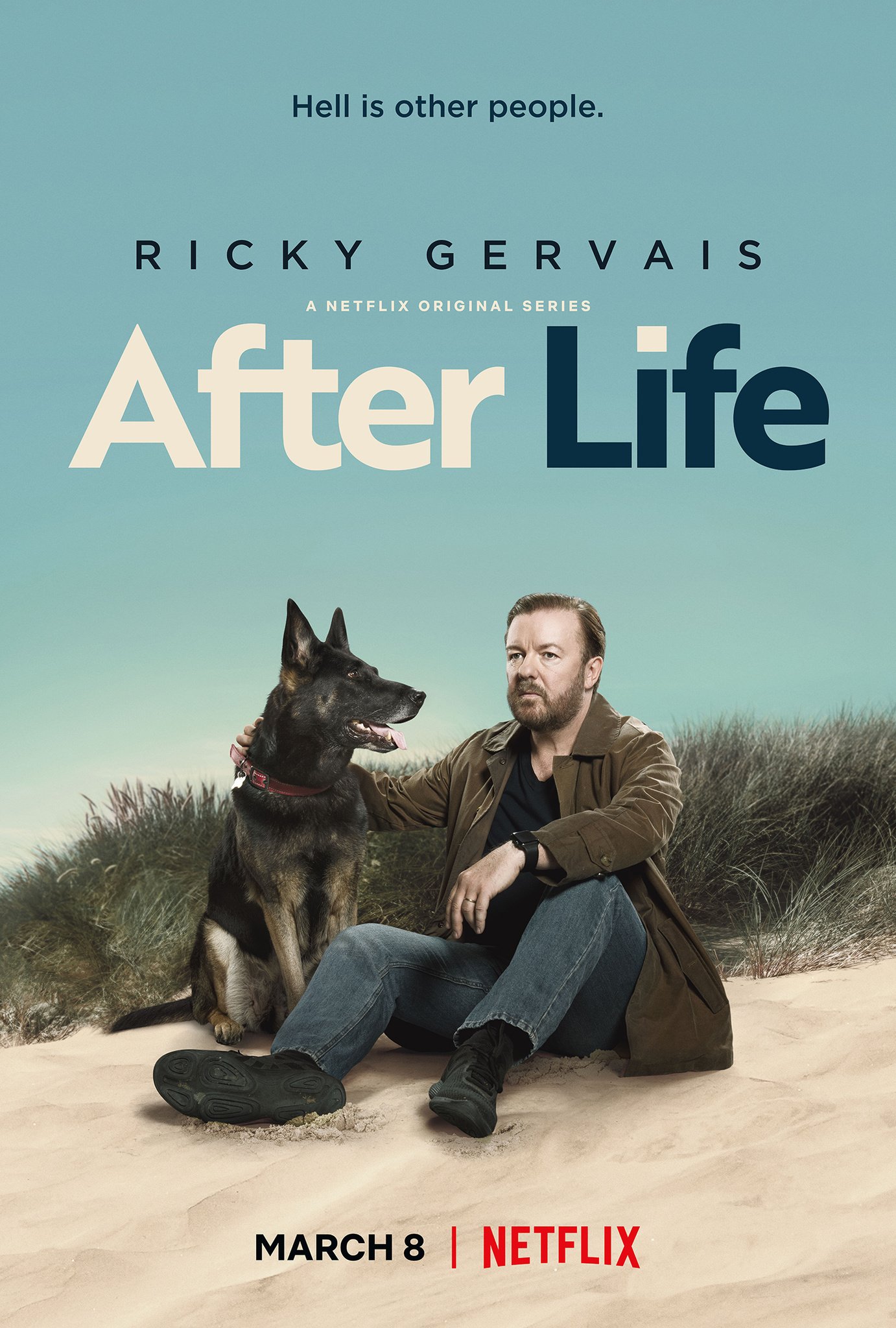 There aren’t many TV series that feature an atheist as protagonist. But Netflix recently offered “After Life,” created by and starring British comedian Ricky Gervais. HofMN member Mary McLeod offers this review:

The series centers on Tony, a misanthrope of massive proportions, who talks about suicide constantly, and calls his curmudgeonly hate a superpower. He claims there is no advantage to being nice, or caring, or having integrity, because the world will just defeat you in ways you can’t imagine. In other words, his wife, whom he loved beyond words, has died.

Thus, the series’ title delivers a twist: instead of the Hollywood version of dying and going to the heavenly after life, it is about what happens to him after his wife’s life is over.

Each episode opens with our protagonist Tony watching his wife’s videos from the grave, telling him to feed the dog, be funny, turn the alarm off in the morning, throw a big party after her funeral. He wallows in these videos.

His therapist is a disaster, whom he rightly criticizes for being a terrible therapist because he’s on Twitter constantly and burdens Tony with his own problems. The thing is, Tony tells the truth, but in a way most of us would never consider.

A “sex worker,” whom he constantly refers to as a “prostitute,” makes several appearances, and of course reveals she has a big heart, and loves to clean his house, because it’s such a disaster.  Apparently, we are to believe he has no libido.

Periodically, Tony runs into the druggie who distributes the local paper Tony works for. It’s a “crap paper,” in Tony’s words, used most often to wrap fish cleanings or other rubbish in, but the druggie is paid to deliver it, and instead probably ditches it in various bins. In other words, there are hilarious episodes in this series, despite Tony’s hate-filled rants.

He and another reporter are dispatched to interview locals, and cover their earth-shaking stories about a man who received five identical birthday cards, a young man who plays two recorders simultaneously by shoving them up his nostrils, a man whose leaking pipes expose a stain in the wallpaper resembling Kenneth Branagh, and a woman who makes rice pudding with her breast milk and bread with her vaginal yeast. These are what pass for front-page stories at  such a paper. I would say that you can’t make this stuff up, but obviously it’s possible.

Humanists will delight in some of the dialogue, like this with a Christian co-worker:

Kath: If you don’t believe in heaven and hell and all that, why don’t you just go around raping and murdering as much as you want?

Tony: I do go around raping and murdering as much as I want, which is not at all.

Other coworker: ‘cuz he’s got a conscience.

Periodically, Tony meets a very nice lady in the cemetery, visiting Stan, to whom she was married for 49 years. He tells her about his shortness at the nurse who is very patient with his dad’s Alzheimer’s. To entertain him, the nurse has told Tony about quite a day at the nursing home: his dad told a fellow patient he would like to do her from behind.  “Why from behind, Dad?” “Because she’s ugly.” And he accused a male patient of having sex with Elton John.

The cemetery lady has a good laugh over this, but then tells him he should apologize to the nurse. “Why?  I haven’t done anything to apologize for.” She tells him he should do it “…just because she’s a nice person.”  And thus begins his transformation. But it takes some time, and does not occur in a straight line. Tony eventually starts heeding the cemetery lady’s very humanist philosophy: “A society grows great when old men plant trees whose shade they know they will never sit in. Good people do things for other people. That’s it. The end.”

No further spoiler alerts here as I want you to see the series — an international hit. Just don’t take any of it too seriously; remember, this is fiction, and intends to pull at your heartstrings, enrage you, and let you grovel in the dumps with Tony. And Ricky Gervais has announced there will be another season, so we’ll have that to look forward to as well.  Just know that this series ends well, and Tony seems to begin to believe he just might feel a teensy bit happy… some day.