Marcy Woodruff Joins Board of Directors

December 2018: How to Support People With Mental Illness 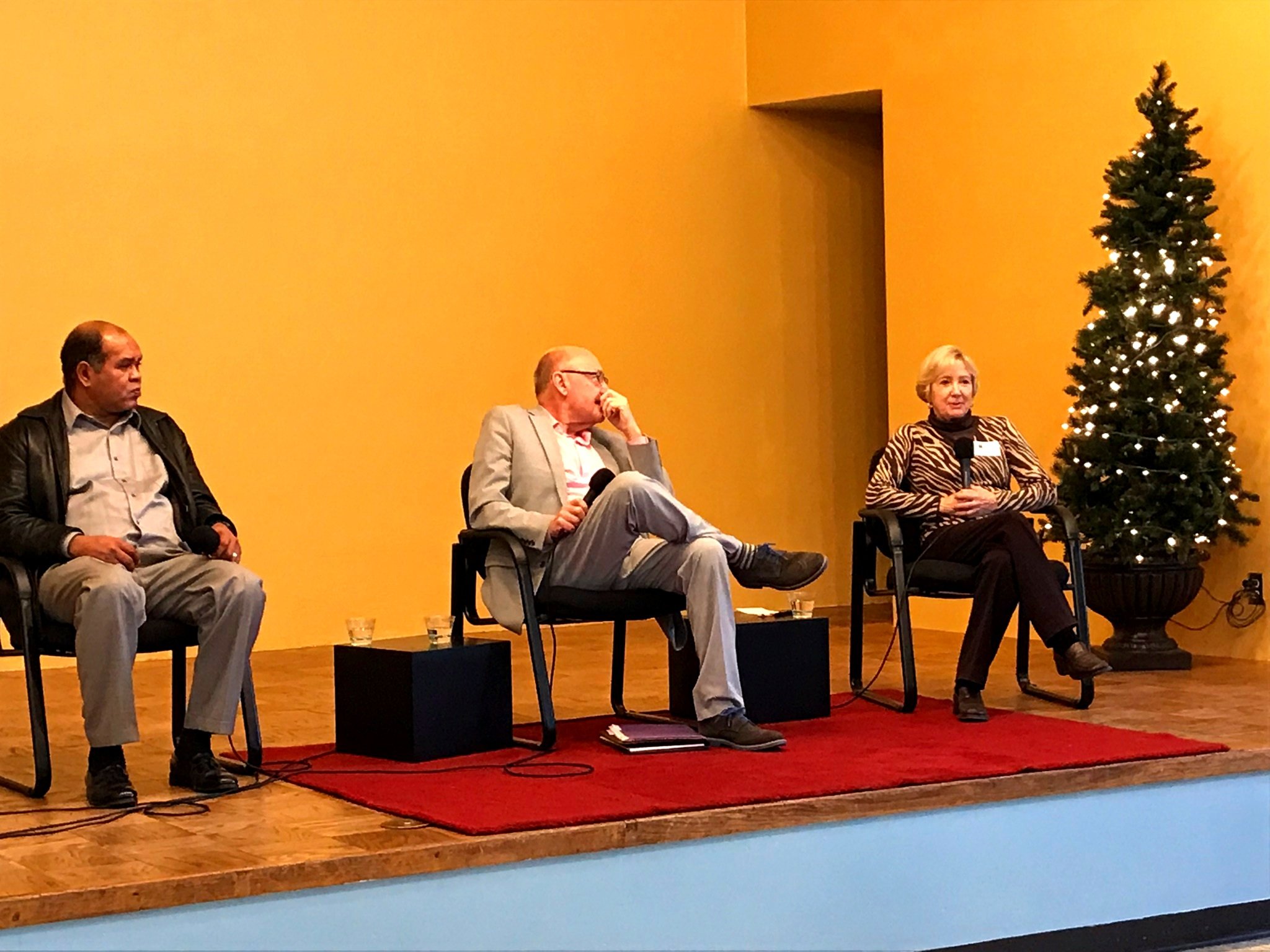 A panel at our December 2018 chapter meeting discussed the challenges that people with mental illness face and offered tips for supporting them.

Larry Ellis and HumanistsMN member Mick Anderson discussed their experiences with Guild Incorporated, a nonprofit that offers community services to people with mental illness—Larry as a client and Mick as an employee.

Larry described his struggle with depression, which started when he was a child, and alcoholism. He said he had been sober since May and made other progress, which he attributed partly to the quality of programs in Minnesota compared with his earlier residence of Arkansas. You can read about Mick’s work, inspired by his own diagnosis of bipolar disorder, here.

HofMN member Mary McLeod, whose son has schizophrenia and who volunteers for the National Alliance on Mental Illness Minnesota, gave suggestions on how to interact with people with mental illness. Following is a written version of her tips.

How to Relate to Someone With Mental Illness

People with mental illness want to be treated just like other people — to a point. Depending upon how well you know someone, you can say just about anything, and do just about anything to them that you would do with someone else you know equally well.

The caveat is that you don’t ever tell them just to snap out of it, or pull themselves together or get with the program. If they could do that, they would have. You do tell them you are there for them, if they want to talk, or to do something with, but if they don’t want to talk, you’re willing to sit quietly with them, and just be their friend. That is appropriate for anyone, but especially someone with a mental illness, and particularly depression.

People with depression feel like a piece of shit. (Pardon my French.) They absolutely know they are not worthy of your company, so they avoid making plans, and if they’re backed into a corner and are forced to make plans with you, they panic because they might not feel up to it when the time comes. Life is simply painful, and they are in as much pain when they wake up as they were when they went to sleep — if they could sleep at all. The pain of depression is worse than any physical pain, and I know, because I went through it about 40 years ago.

Bipolar disorder is more confusing to talk about because it can be unipolar — i.e., normal to depressed, and back to normal — or truly bipolar, meaning depressed up to manic and back to depressed again. A trained psychologist or psychiatrist can diagnose this, and it truly is an art. The suicide rate is higher for bipolar disorder than for any other mental illness.

And schizophrenia is thoughts, sights, or voices that other people cannot perceive, i.e., they are coming from oneself. They can be very persuasive, or seductive, or harrowing. They can get you into serious trouble with our legal system, and wreak havoc with relationships, because they disrupt trust and understanding through paranoia and distorted thinking.

Why do I tell you this? Well, when one is recovering and well-therapized and correctly medicated, they just want to be treated like everyone else. Some illnesses are harder to treat than others, and some seem permanently untreatable, and that is a terrible sorrow for the person with the mental illness, and a failure of science and medicine, but they are always working on it. But remember — they just want to be treated like anyone else. Kidded a bit, challenged, punked, talked with seriously about anything from the political scene to the Vikings’ latest screw-ups, whatever you would do with other friends, do them the honor of treating them the same way.

And please learn to distinguish between mental illness and developmental disability. People with mental illness have a range of IQs, but the average IQ of people with schizophrenia is higher than the rest of the population.

But here is the bottom line: None of us wants to stand out except to excel. We don’t want to be considered weird, or mental, or postal, or bonkers, or crazy, or nuts, or round the bend, or any of those other terms we throw around. People with mental illness pick up on those attitudes, and apply them to themselves, and none of us want that to happen.

We’re each individual, and we want to be unique, but in a good way. We want to be seen as people who have a brain, and a point of view, a personality, experiences we can share, and jokes and stories we can tell, that’s all. People with mental illness are normal, except that they have some unusual brain chemistry that is none of their fault. None of them did anything wrong.

I’ll tell you a little story about myself. I have peripheral neuropathy, which means that the nerves in my hands, forearms, feet, and lower legs are slowly, slowly dying. There is no way to know the rate at which they will die, or how it will ultimately affect me — maybe a little, or a lot. My son, Matt, has schizophrenia, and one day it occurred to me that he and I both have hidden disabilities. That means that sometimes we have needs that aren’t visible, but are hard to bring up, and sometimes people don’t believe us, or they make fun of us. A Humanist did that to me once, and maybe I have done it to someone else, but I hope not.

Anyway, Matt and I have talked about this shared status, and bonded over it several times, and it’s a good way to illustrate how much we have in common, through our own uniqueness. We’re all just muddling along, figuring things out as we go. And none of us has a corner on understanding or enlightenment, I can tell you that.