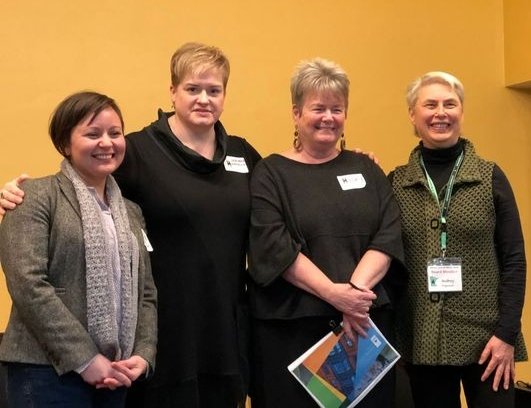 A panel at our November chapter meeting discussed the challenges of long-term urban and regional planning in our area as the population grows and issues like racial disparities and climate change loom.

They highlighted the range of factors that planners consider as they try to ensure the region grows in a methodical, rather than haphazard, way—for example, affordable housing, accommodations for older and disabled people, environmental impact, water, sewers, and transit (light rail today, autonomous cars tomorrow).

As anyone who has followed reaction to the Minneapolis 2040 plan knows, planning for increased density is one of the more controversial aspects of this work. Some welcome a world of more multi-family (and affordable) housing, retail outlets, and public transit that could reduce car use. Others worry about the impact of the increased activity on traditional single-family neighborhoods.

But Barajas noted that the Metropolitan Council projects that the Twin Cities region will grow by 800,000 residents by 2040. So, said Thompson, it’s not a matter of “wanting” density, “it’s going to happen.” She added that cities also have to think about the bottom line when they plan new developments —for example, the expensive revamping of the old Ford Site in St. Paul. The reality is that a mixed-use project creates a big enough tax base to undertake such a project; single-family homes alone do not.

Worthington said planners are taking into account studies showing that Minneapolis suffers from high levels of racial and educational disparities. She said the 2040 plan is built around 14 goals and six values that attempt to understand “more holistically how communities develop and how to support residents in succeeding.” She said transit, housing, a living wage, and child care are critical. “If you have those four things, you have the foundation for being successful as a family.”