Be a Secular Values Voter

Getting in Touch with My Inner Conservative 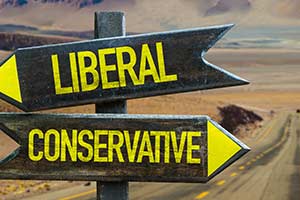 Most of my life (yes, even including childhood) I have considered myself a “liberal.” This is no accident. My parents were dyed-in-the-wool FDR liberals, and union members, who always identified with the underdog. I recall despising Joe McCarthy as a kid while watching him on television demeaning his opponents. I would have voted for Adlai Stevenson (twice) but for a silly voting-age requirement that prevented seven-year-olds from casting ballots. Needless to say, I had a life-long, visceral hatred of Richard Nixon.

My self-described liberalism and my loyalty to my political “tribe” has remained firm throughout my life. For the most part, I have fallen in line on the issues espoused by the Democratic Party and voted for their candidates, even if I had to hold my nose doing it. However, on several occasions along the way, this tribal loyalty was uncomfortably shaken. For example, when organized labor supported LBJ on the prosecution of the Vietnam War. Witnessing the pervasive corruption of the Democratic political machine in Chicago, where I grew up, also tested my political worldview.

Political tribalism is more potent now than it has been in generations. In the age of Trump, people are choosing sides that cut across issues like the economy and identifying with political candidates who represent certain cultural values. For example, conservatives will disparage coastal, cultural “elites” for even the food they eat or the cars they drive. Liberals, in turn, will oftentimes disparage conservatives for the music they listen to or their devotion to NASCAR racing.

But aside from such superficial cultural examples, there have always been important core differences between conservatives and liberals throughout American history. For example, the size of government, the interpretation of Constitutional rights, and crucially, where and how governmental resources are directed. However, in political affairs, as in science, views should evolve and change if supported by the evidence. For example, how many liberals do you know have spoken out over the years regarding federal spending and deficits?

For some reason, the argument against large federal deficits is usually reserved for Republicans and so-called conservatives. Why is that? The short answer is that deficit spending during times of economic hardship was famously put forth by New Deal Democrats as a remedy for the stagnant economy of the Depression years. Republicans portrayed themselves as fiscally (and morally) opposed to such budgetary shenanigans. As a result, they hoped to grab the moral “high ground” against the Democrats in this nation’s never-ending political budget battles.

This ostensible financial prudence of the Republican Party has stuck as part of its political DNA through the years even though every Republican administration since Reagan has relied on significant deficit spending to finance their desired policy goals—for example. tax cuts for the wealthy and defense spending.

But liberals should embrace fiscal responsibility for practical as well as moral reasons. Financing the national debt alone will soon amount to an astounding $1 trillion annually. This could eventually require that federal programs that support working and middle-class people be significantly cut, or even eliminated. If history is any guide, legislators will first seek to extract “savings” from food stamps, school lunches, and community health programs. They will also push entitlement “reform,” usually meaning cuts to Social Security, Medicare, and Medicaid.

Liberals who support programs that actually help people in their daily lives should understand the benefits of fiscal discipline. Reducing or eliminating government waste, including federal programs that liberals support, should be considered a priority. Such waste needs to be characterized for what it actually is—the diversion of resources away from people who need them to politically connected government contractors and fraudsters.

Does that make me a “conservative”? Perhaps, but being realistic about how tax revenues are spent is going to be of vital importance in a less-forgiving financial environment going forward. This fiscal conservatism should not, of course, preclude raising taxes on the super-wealthy who have made out like bandits under  Republican tax cuts.

Another liberal shibboleth is support for programs that  encourage young people to go to college. College is great for those who have the aptitude for it, or where students choose programs that realistically increase career opportunities. However, in a more stringent budgetary environment, liberals should focus more on providing resources for job and skills training that do not necessarily require a college degree.

They should support programs that emulate the German model where young people receive political, economic, and cultural support to attend trade schools  to obtain the practical skills necessary for a modern industrial economy.

And consider the alarming level of  student-loan debt. This is now the second-highest consumer debt category, behind only mortgage debt, and higher than both credit-card and auto-loan debt. This is the toxic consequence of encouraging young people to go to college, notwithstanding their aptitude or chances of success—and a good example of how a formerly positive, liberal social policy has evolved into bad social policy because of corporatism and greed.

The average student in the Class of 2016 had $37,172 in student debt—a significant portion owed to politically connected for-profit colleges with poor job placement records and scammy reputations.

It is not college, necessarily, that secures someone’s future. Having marketable skills that pay a living wage is the key. This country doesn’t need more baristas with graduate degrees. It needs more workers with the needed practical, technical skills for the jobs that the Labor Department says are going unfilled.

The Role of the Military

Liberals should also focus on the role of the military in our society. There was a time when conservative elements were skeptical of the use of military force to resolve international issues. Remember, it was George Washington who warned against “permanent alliances” in his Farewell Address and Thomas Jefferson who was opposed to “entangling alliances.”

Fast forward to 2018 and the “Military-Industrial-Congressional Complex” literally girdles the globe at a huge financial cost to the American taxpayer. The U.S. has approximately 800 bases in over 70 countries around the world. And liberals have supported this growth almost to the same degree as conservatives. Recall that not only did Obama extend the war in Afghanistan, but unwisely intervened in the conflict in Libya.

During the past month Congress passed the largest defense-spending bill in our history. If you add the budgets for the Departments of Homeland Security and Veterans Affairs, this country spends well over $1 trillion on security-related matters. And yet many of our bridges, roads, and airports get older and more decrepit as the years pass.

The toll the militarization of our society has taken on this country’s resources and values has been enormous. The philosophically “conservative” position on the use of the military is in line with the pre-Wilsonian consensus that foreign adventures should be limited. Perhaps it’s now time for liberals to go “back to the future.”

If you are a liberal, our political “tribe” needs to have serious discussions about its core values. Our guiding principle should be that the people need to receive a larger share of government resources at the expense of a bloated military, tax-privileged oil companies, hedge-fund managers, and other assorted politically protected entities.

After all, wasn’t it a Republican long ago who talked about a “government of the people, by the people, (and) for the people”?