First-Person Humanism: A Passion to Help Others With Mental Illness

What Is Humanism’s Elevator Speech? 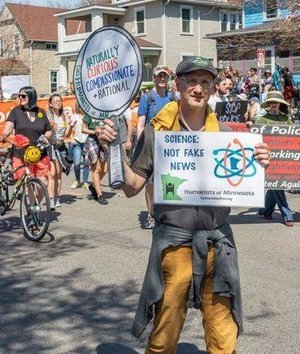 Can humanism be defined in a nutshell? I’m not so sure. Most of us are hard pressed to concisely explain humanism to the uninitiated when asked. We don’t have our elevator speeches down cold. And we’re not predisposed to soundbites. That characteristic may be lacking in the DNA of the average humanist. ?

Trouble is, we have a lot of explaining to do. We’re a big-tent philosophy, not ruled by dogma or commandments but by scientific methodology and ethical reflection, boundless inquiry and life-long learning, individual meaning-making and social responsibility. How the heck do we quickly and succinctly tell others about our humanist worldview in a way that captures their attention, is intellectually honest, and welcomes seekers?

Branding, my dear Watson. Branding. As an organization we must be able to grab attention and get our message across with just a few words or images. Our adherents will be few if we expect everyone to digest the Humanist Manifesto before they consider— let alone embrace — humanism. Good branding helps capture attention and deliver a cogent message in a world awash in media.

For any entity, branding starts with identifying an organization’s value proposition.  In other words, why do we do what we do and what sets us apart from the competition. To get specific, what sets us, a humanist group, apart from other groups — especially secular ones?

To help us figure that out, the Board asked our members at the annual meeting in May to serve as informal focus groups. We sat at tables and responded to a variety of questions about why we got involved in the organization, what was important to us about humanism, and what kind of messaging spoke to each of us.

Having scrupulously compiled the notes from all the tables, I am happy to report that there was significant overlap. However, people favor different words with similar meanings. And not everyone emphasizes the same aspects of humanism.  People are animated by different values and proclivities.

The branding process imposes a discipline, that we identify our value proposition and hone in on it.  For example, a comment emanating from one group was: we are not a “do not believe in god club” – even though not believing in god is central to many humanists. There’s already a local group for that – the Minnesota Atheists. These folks prominently wear the atheist title and organize around that identity as a way to normalize the nonbeliever outlook, counter religious hegemony within society, and promote a positive paradigm of life without god. All very worthy goals. Yet that is not the humanist value proposition.

Nor are we just another ethically driven club, though humanists are indeed committed to making the world a better place by living an ethical life and engaging in social service and action. Even so, most of the focus groups expressed interest in stronger messaging around the ethical component of humanism. Many shared the sentiment that our activities and messaging need to do more to reflect an action-oriented organization.

There’s a plethora of other local groups and organizations that are ethically driven and action oriented. They are our allies. But what distinguishes us from them? Our branding efforts must hone in on what makes us unique. Why join or get involved with Humanists of Minnesota as opposed to one of these other groups, especially if they are working on an issue that you especially care about?

Because our ethics are evidence-based, something at least a couple of focus groups wanted to emphasize. That’s not true for every ethically driven group. Some are expressly faith-based. Others are nonsectarian but don’t really care why folks get involved; they just look for people who care about the issue for whatever reason. Most progressive service and advocacy groups are evidence-based, but they seldom focus on that fact.

Now we’re getting closer to our value proposition. Our ethics are grounded in real-world knowledge of human needs and a sense of pragmatism — call it problem solving that works. Humanists are expressly science-minded, critical thinkers, and rationalists — in other words, naturalists not supernaturalists  But the term “naturalist” can be problematic as it has a variety of meanings in our culture. Messaging and branding are complicated.

And we are not done. Another important component for our organization is community — the desire, and need, to get together with like-minded people. Or at the very least to “network,” to know you are not alone in a society where religiosity is still the default mode. Our members really want a place to explore life’s deeper questions about meaning, purpose, and what it means to be human.

And some want us to be more active in holding the line against religious incursions in the public sphere. At the same time, we expect to be civically engaged in creating an ethical society with our fellow humanists.  As I said at the beginning, we have a lot of explaining to do.

And so it goes. Humanism in a nutshell. Hardly. But we’re still going to try to better capture the essence of who we are with some more serious branding, messaging, and redesign work.  Stay tuned.