Coffee Is Not Just for Closers 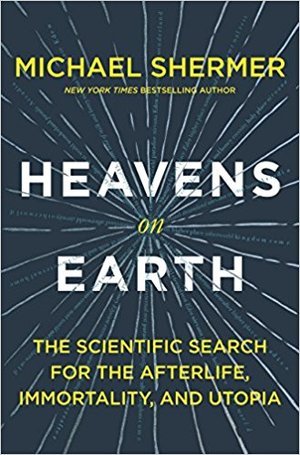 Heavens on Earth: The Scientific Search for the Afterlife, Immortality, and Utopia
By Michael Shermer (Henry Holt & Co., 2018)

In his latest book, Michael Shermer — publisher of Skeptic magazine, author, and Scientific American columnist — offers a comprehensive review of what science can (or cannot) say about the afterlife, immortality, and the past and present searches for possible future utopias.

As a diligent researcher, he masterfully explains to us the multitude of schemes that have been  pursued to achieve these “heavens.” But being a true dyed-in-the-wool skeptic, he shows us why none of them are likely to succeed or be valid. His conclusion is well stated in his prologue: Memento mori (remember we have to die); life is short (despite advances in medical technology); and life is final (despite the large percentage of people who believe in life after death including, surprisingly, some self-proclaimed atheists!).

Part I of Heavens on Earth: The Scientific Search for the Afterlife, Immortality, and Utopia addresses the varieties in mortal experiences and immortal quests. Shermer says the primary problem is being able to imagine our mortality: “Our inability to imagine our own nonexistence means that an ultimate understanding of our own mortality will forever elude us, leaving us to live for the here and now even while the hereafter beckons us.” He goes on to lay out the two primary theories for dealing with mortality: Terror Management Theory and Emotional Priority Theory (the prioritization of one’s emotions when confronted with mortality).

Shermer discusses how the inability to imagine our own nonexistence led early humans to think of a spirit world after death, as evidenced by burial sites tens of thousands of years old that show trinkets buried with hominoid remains. Yet this thinking is not innate. Recent developmental psychological studies show that just as children are learning that death is a natural and final process they are open to the intellectual idea of an afterlife if it is taught by authority figures. This leads Shermer to provide in-depth reviews of the teachings of the monotheistic religions: Jewish, Christian, and Islamic visions of life after death, the infinite variations thereof, and theories of how they came about.

Part II, on “the scientific search for immortality,” is the section I found the most interesting. Shermer starts with the “Spiritual Seekers,” focusing on New Age figures, particularly Deepak Chopra, with whom Shermer has had a multi-decade debate/relationship. He describes Chopra’s view of existence well, but alternates between calling his view of reality complementary to materialism and opposed to it. (In brief, Chopra takes subjectivity to the extreme. Since we perceive the world through our senses and interpret it with our brains, he argues that our consciousness causes the universe to exist and has priority over matter.)

In the end, Shermer does not find this an acceptable thesis. (Interestingly, a favorable comment by Chopra appears on the book jacket, probably because Shermer at least gives his views a hearing.)

From here he explores near-death experiences, reincarnation, anomalous psychological experiences, and talking to the dead. He gives various examples of each, offering a scientific basis for why these subjective experiences cannot be real. He deals with the issue of the “soul” by starting with the “identity problem.”

Science tells us that all the cells in our body are replaced multiple times in our lifetimes. Furthermore, our bodies are inhabited with multiple organisms that contribute to our well-being and feeling of self. Yet we don’t feel like a collection of organisms and our sense of self remains intact over our lifetimes. So our identity seems more like an imprinted pattern than the actual material makeup of our bodies.

The details Shermer brings to these concepts is impressive and too formidable for this review. It all builds up to a case of why it is difficult to see how your identity (which religious people would equate with a soul) can survive death. It is even more difficult to see how many of the schemes that are being pursued by scientists (such as cryogenic freezing or brain-map uploading to a massive computer) can possibly actually preserve your identity. He discusses the various options that are being worked on (mostly with funding by billionaires) with great detail.

In Part III, Shermer discusses humanity’s progress and the various visions of utopias and dystopias that seem to flourish in our societies. Much of this has to do with how humans are prone to pessimism and a desire to “return to the good old days.” He explores the evolutionary reason for this and goes on to reiterate his thesis (as outlined in his book The Moral Arc), one he shares with Steven Pinker, that in fact humanity has continually created a better and better world for more and more people. This is a continuous process and likely will never reach the level of a utopia (or dystopia).

In the final part, Shermer sums up all he has laid out about self and mortality. He discusses how people deal (or should deal) with their mortality and give meaning to their lives. Though the individual is mortal, the species can, for all practical purposes, be immortal (that is, if we don’t destroy ourselves).

To find meaning in one’s life, the individual needs to discover who they really are. Purpose is personal and there are many ways to satisfy this deep-seated need. In the end, this is a very humanist book and I think most humanists will learn something from it. Shermer researches his topics well and the last 30 pages contain notes and references for everything he has presented. A good read.