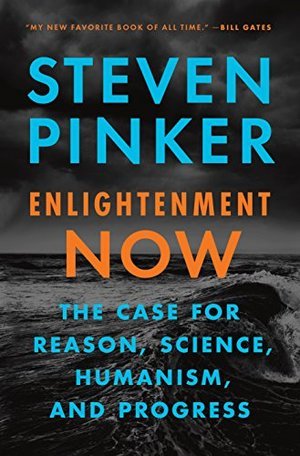 I’ve been a fan of Steven Pinker since 1994 when I came across his book The Language Instinct. I have read everything he’s written since then, my favorite being The Blank Slate: The Modern Denial of Human Nature.

His newest book is Enlightenment Now: The Case for Reason, Science, Humanism, and Progress—and as usual he blows me away with his intellect, wit, and distinctive writing style. He is in my opinion one of the world’s greatest cognitive scientists and public intellectuals. In this work, he makes a strong case for the successes brought to human society by the Enlightenment.

The book is divided into three parts. Part III is titled Reason, Science, and Humanism, and I’d like to focus my effort on the final chapter on humanism. It includes this quote, which I think represents the essence of what Pinker is trying to accomplish with this book:

“Humanism may seem bland and unexceptionable—who could be against human flourishing? But in fact it is a distinctive moral commitment, one that does not come naturally to the human mind. As we shall see, it is vehemently opposed not just by many religious and political factions but, amazingly, by eminent artists, academics, and intellectuals. If humanism, like the other Enlightenment ideals, is to retain its hold on people’s minds, it must be explained and defended in the language and ideas of the current era.”

He goes on to say that the idea that morality involves maximizing human flourishing clashes with two “perennially seductive alternatives.” The first is “theistic morality,” or obeying the dictates of a deity, which are enforced by supernatural reward and punishment. The second is “romantic heroism,” the idea that morality consists in the purity, authenticity, and greatness of an individual or a nation. Though this concept was first articulated in the 19th century, we can see it today in movements like authoritarian populism, neo-fascism, and the alt-right.

But, Pinker writes, theistic morality has two fatal flaws. The first is that there is no good reason to believe that God exists; the second is that that even if there were a God, his divine decrees, as conveyed to us through religion, cannot be the source of morality. The explanation goes back to Plato’s Euthyphro, in which Socrates points out that if the gods have good reasons to deem certain acts moral, we could appeal to those reasons directly, skipping the middlemen. If they don’t, we should not take their dictates seriously.

The Euthyphro argument puts the lie to the common claim that atheism consigns us to a moral relativism in which everyone can do his or her own thing. The claim gets it backwards. A humanistic morality rests on the universal bedrock of reason and human interests: it is an inescapable feature of the human condition that we’re all better off if we help each other and refrain from hurting each other.

And obviously atheism is not a moral system in the first place, he writes. It’s just the absence of supernatural belief, like an odd willingness to believe in Zeus or Vishnu. The moral alternative to theism, he concludes, is humanism.

His take on Trumpism? Pinker writes that he used to think it was “pure id, an upswelling of tribalism and authoritarianism from the dark recesses of the psyche.” But the phrase “intellectual roots of Trumpism” is not oxymoronic, he says, noting that Trump was endorsed in the 2016 election by Scholars and Writers for America in a “Statement of Unity” signed by 136 people.

And Trump was closely advised by two men, Stephen Bannon and Michael Anton, who are reputed to be widely read and who consider themselves serious intellectuals. Anyone who wants to go beyond personality in understanding authoritarian populism must appreciate the two ideologies behind them, Pinker says. Both are militantly opposed to Enlightenment humanism and were influenced in different ways by Nietzsche. One is fascist, the other reactionary, not in the common left-wing sense of “anyone who is more conservative than me,” but in their original technical senses.

Interestingly enough, Pinker has a lot to say about Donald Trump and I enjoyed everything he said. One of the nice features of this book is the index section, which is 31 pages long. The Donald got 28 lines.

Reading Pinker’s writing is an exhausting mental experience as every page is crammed with interesting information and analysis. He does an incredible job of finding wise people and their thoughts. In fact the Notes and References sections cover 69 pages. I’m not the brightest bulb in the box but I do know genius when I see it. Any self-respecting humanist should be proud to have this book in their collection.