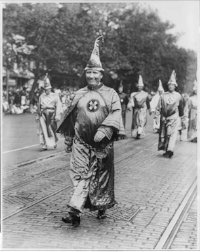 It is May 2018 and I am still trying to process the political events of November 2016. Similar to other life events people experience, like the sudden loss of a job or the ending of a relationship, the election of Trump left me disoriented, confused, angry.

So for the past year and a half I have engaged in a sort of political forensics as a way to make sense of it all. This involved reading literally hundreds of articles, along with numerous books, regarding the events surrounding the election. I have also attended presentations given by academics, writers, and other assorted experts. I have, to my embarrassment, also become a nighttime cable-news addict.

During this review I have probably read or heard Mark Twain’s quotation that “history doesn’t repeat itself, but it often rhymes” close to a dozen times. In my view, it has now become an annoying cliche. But there is an underlying truth to it that reveals uncomfortable facts about certain political, social, and economic realities present in our body politic.

The historical record shows that every so often this country undergoes a form of political insanity. Nativism, fear, and demagoguery bubble up from currents that flow beneath the surface of our society. Generally unpredictable in the short term, but predictable in the longer term, it’s like living in San Francisco. You know eventually an earthquake will rattle the earth beneath you, but you don’t know when or how hard the tremors will be. Perhaps the better analogy is that there is a form of malevolent virus in the American bloodstream. Always there, oftentimes latent, sometimes not.

We can certainly go back further in time, but just reviewing the last 100 years is instructive. During World War I this country was convulsed by anti-German hysteria. People were summarily fired from their jobs for having German names and the teaching of German was banned in several states. An organization called the American Protection League, with hundreds of thousands of members, sought to ferret out disloyalty among those who may not have expressed sufficient patriotism.

Many citizens of German or Irish ancestry were particularly suspect for not supporting the war effort with sufficient zeal. It was common for people to change their names to avoid the perception of not being loyal Americans. With the end of the war the anti-German zealotry abated. However, in the South, the lynching of African-American men did not as changing your name was not an available option for them.

After the war the country experienced several violent strikes and race riots as industrial tycoons, and white America in general, found it difficult to let go of their powerful grip at the top of a class and race-based hierarchy. There was a “Red Scare” as immigrants and leftist radicals were targeted by Attorney General A. Mitchell Palmer for arrest and deportation. Palmer conducted numerous raids all over the country, often without the benefit of warrants, in an effort to eliminate the perceived threat to the existing social order. When prosperity and a degree of normalcy returned to the country during the “Roaring Twenties,” the worst of the reactionary impulse ended.

The 1930s was a turbulent time in the nation. The economic and social shocks to the middle and working classes due to the Great Depression provided a rich environment for nativists, xenophobes, anti-Semites, Klansmen, and other assorted misfits. Father Charles Coughlin, the Rush Limbaugh of his day, spewed ignorance and hate from his weekly radio broadcasts. The America First Committee (sound familiar?) and its famous spokesman, Charles Lindbergh, often expressed pro-Nazi social and political views. The onset of World War II broke this fever as Americans rallied to fight the common enemy.

After World War II the nativist fever erupted again. The perceived threat from international communism was a pretext for many of the same prewar nativists and demagogues to come out of the woodwork in an effort to ostensibly protect America from foreign influence. “Red-baiters” like Richard Nixon and Joe McCarthy created a climate of fear where co-workers and neighbors learned to distrust each other. Loyalty oaths came into vogue and those who dissented could expect to lose their jobs, or perhaps even their freedom. The House Un-American Activities Committee became the Grand Inquisitors of the era as people were humiliated and threatened because of their views and “blacklist” became a common verb. Only the self-destruction of McCarthy broke the immediate fever. Later, the bitter military loss in Vietnam, and detente between the superpowers, served to ameliorate the insidious anti-communism of the era.

Although the Cold War between the the U.S. and the Soviets  continued to linger for several more years, unscrupulous politicians in this country continued to benefit from racial and class divisions. Richard Nixon’s “Southern strategy” was nothing more than the manipulation of the fear in the white majority population that people of color were progressing at their expense. It was a cynical opportunity for “flipping” the white working class to the Republican Party by stressing cultural (i.e. racial) issues over economic ones. Maintaining “law and order” were code words used by Nixon, and others, for keeping people of color in their place.

Ronald Reagan pursued this strategy further when he infamously kicked off his campaign for president in 1980 in Neshoba County, Mississippi — where three civil rights activists were murdered 16 years earlier. Reagan also was an unapologetic union buster whose conservative tax and economic policies jumpstarted corporate America’s quest to lower workers’ wages and increase corporate profits. These policies served to increase income inequality and have contributed to structural economic problems in this country ever since.

Fast forward to today and we have witnessed how globalization and technology have caused significant economic and social dislocation in previously stable communities, especially in the heartland of this country. Unfortunately, these dislocations have exposed social and racial divisions that have never been successfully resolved. As a result, these festering divisions have allowed a shameless, so-called populist to reap the rewards of discontent.

Historically, unscrupulous politicians in our country have often resorted to race-baiting and immigrant bashing to get elected. The current economic forces that have put downward pressure on the American middle and working classes have served to incubate a political virus that many observers thought was gone from the American body politic. But, in fact, this virus had lain latent underneath the surface of our political system and erupted when the conditions were ripe. In 2016, these conditions — historic income inequality, fear of immigrants, racial pandering, and a hyperbolic right-wing media — helped provide the oxygen for political exploitation. Enter Donald J. Trump and the vengeance of history.

Unless these unresolved conditions are successfully mitigated, this virus will continue to manifest itself in times of stress. Other republics in the past were eventually overcome by nativism, fear, and demagoguery because of their inability to remedy underlying social and economic conditions. Will ours be next?