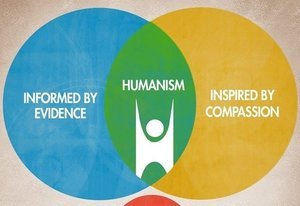 What if everyone in the world were an atheist? Would our problems be solved? Hardly. Would the world be a better place? I’d like to think so, but the evidence to date is inconclusive. Throughout history awful things have been done in the name of religion as well as positive things. Likewise, awful deeds have been done by the godless as well as noble deeds for the well-being of all.

Atheism alone, then, is not what will make a better world or ensure a better life. Nor can we find that hope in religion. History has proved otherwise; in fact, it’s one of the major reasons people are leaving religion behind.

For millennia, however, religion has been the epicenter of practical ethics. But as more and more people walk away from religion, the moral landscape is becoming an unpredictable rugged outback wherein free-market values manipulate us and vie for our allegiance like ubiquitous online product ads. Many non-believers stay connected to religious communities for this very reason—to remain ethically grounded (hard as that may seem to some of us), then tweak and modernize outdated offending moral precepts as best they can. Many others still defer to the ethical guidance of their preferred religious leaders just because where else does one turn?

So, no god? Now what? Actually, a free for all. Despite what some non-believers think, all is not well when you just get rid of religion. The atheist outlook is not adequate to provide a framework for deliberative ethical engagement. Atheism is neutral regarding the best way to discern the values and set the standards by which to live. One need only look online to see the variety of freethought expression. Well-meaning atheists compete on internet platforms with patriarchal, homophobic, racist, or simply self-absorbed atheists. Some non-believers are indeed adding a new toxicity to the overarching secular movement.

Of course, most atheists, like myself, defer to science and facts for guidance in many of our affairs. While helpful in weighing some issues, it isn’t enough. As the 18th-century philosopher David Hume so wisely observed: you can’t deduce an “ought” from an “is.” Sure, many an atheist has taken up the self-study of moral philosophy, but ethical inquiry and practice requires more than an academic perspective. How do ordinary people and citizens engage in the multifarious ethical issues and dilemmas that pepper our personal and civic lives?

Enter humanism. While many humanistic values—as we now define them—have been present throughout history, it is only in the last few centuries that a deliberate and coherent humanist worldview has emerged to provide an alternative to religion’s claim on practical ethics, as well as nudge moral philosophy out of the halls of academia.

In his book The Ethical Project, Philip Kitcher, a contemporary philosopher and humanist, characterizes ethics as a “social technology” devised by humans to enable us to get along with others and thrive. This social technology has evolved and adapted over time as our social interactions have expanded into the global interconnections of the modern world.

Through much of history, religion claimed the field of ethics as its own and authoritarian governments used and abused it for their own purposes. Ethics, however, is a manifestly human endeavor, a socially constructed framework for living, ever adapting through time and place and transcending individual proclivities, religious institutions, or governmental entities.

Genuine ethical engagement is a dynamic, collective endeavor, not a set of personal preferences or inherited tribal codes. And it’s an even more challenging endeavor in the modern world since now we all come from different cultures, ethnicities, classes, circumstances, and histories, living side by side in shared spaces. Hence, ethical standards, moral precepts, and, in the end, public policies are derived from the needs that arise out of our many and varied lived experiences.

Philosophical naturalism posits an egalitarian model of ethical engagement that humanists endorse. We seek to advance a moral order that is built on the collective capacity of humanity to serve itself. As moral agents we assert our responsibility to shape a desirable future for all of humanity and the planet. Hence our ethics are global, egalitarian, and inclusive.

Admittedly, that’s a pretty thorny proposition—relying on ourselves and our fellow human beings to forge a way forward to live together in peace and fulfillment. There’s no deferring to some “higher power,” tribal loyalty, or ideological hubris to set the standard or settle our differences. But such ethical engagement is only possible if we agree on verifiable common knowledge through scientific or evidence-based naturalism. Herein lies the foundation of the humanist worldview upon which a shared ethical life can be built.

Over the centuries, philosophical and scientific naturalism has been instrumental in identifying shared values and ethical standards across the globe. The moral landscape continues to be transformed by an ever-more equitable and inclusive ethics—although every day somewhere there are those who would seek to thwart these hard-won advances.

Much progress has been made. Unlike a few centuries ago, respected leaders and accomplished scholars now unequivocally promote humanist values: personal well-being, the dignity of all, compassion and empathy, universal education, democracy, universal human rights, and environmental sustainability.

Humanists must become more visible and prepared to welcome the growing number of so-called “nones,” those who do not affiliate with any religion, into our communities. Our robust worldview provides a bigger umbrella than atheism under which to unite people. We can bring people together in common cause who share our commitment to a global, inclusive ethics and are willing to accept a secular methodology toward that end.

Humanism asks us to commit to something larger than ourselves. In fact, to embrace all of humanity and the planet. Idealistic? Yes. Possible? Of course, that’s an open question. But humanism is a home for those who find meaning and purpose in that effort.

Atheism’s White Male Problem: A Movement Needs a Moral Cause Beyond Glamorizing Disbelief

Too Many Atheists Are Veering Dangerously Toward the Alt-Right

No, Most Atheists Are Not Veering Dangerously Toward the Alt-Right

From the Enlightenment to the Dark Ages: How “new atheism” slid into the alt-right