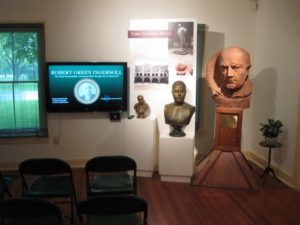 The Robert Green Ingersoll Birthplace Museum will celebrate its Silver Anniversary in August, prompting Paul Heffron to offer these reflections.

Although I completed a PhD program in American studies at the University of Minnesota, I don’t recall being made aware of Robert Ingersoll, one of the most prominent political, legal, and cultural figures of 19th-century America. He was the foremost orator of his time, as influential as Thomas Paine and Ralph Waldo Emerson, and yet practically left out of American history.

Possibly this was because he was the foremost freethinker of his time, an uncompromising critic of religion, and an agnostic who was difficult to pigeonhole. Humanists have sought to restore him to his rightful place in American secular history.

In her book The Great Agnostic: Robert Ingersoll and American Freethought (Yale University Press, 2013), Susan Jacoby titles one chapter “The Humanistic Freethinker,” acknowledging Ingersoll’s remarkable anticipation of humanism before the name came into its modern usage. Referring to his positions on modern human-rights questions, Jacoby writes, “From a secular humanistic perspective Ingersoll was on the right side of nearly all of these issues” (p. 109).

And so it is that today’s secular humanists and freethinkers have done much to honor Ingersoll and make known his life and work by restoring his birthplace museum in Dresden, N.Y., and erecting a statue of him in Peoria, Ill. Seeing these sights and reading about Ingersoll’s life and influence, along with some of his writings and orations, is a special inspiration for today’s humanists and freethinkers.