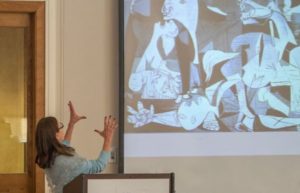 Humanists of Minnesota member Susan Schaefer planned our February chapter meeting on The Impact of the Arts on Social Justice and Politics. Speakers included Susana di Palma, founder and artistic director of Zorongo Flamenco Dance Theater, and arts critic Will Harris. Di Palma discussed and showed video excerpts from the company’s upcoming production of “Garden of Names,” which explores the impact of terror and torture as experienced in Argentina during the political upheaval of the 1970s. Susan made the following introductory remarks:

I begin with a quote from our special guest, Susana di Palma: “Imagination and art are our greatest tools for survival as human beings.”

This afternoon we assemble to peel back the power of imagination and art to reveal, contemplate, combat and overcome injustice. We are here to witness and discuss the influence of visual and verbal storytelling – of art, the arts, to transport the human imagination beyond the forces of oppression and of suppression of basic human rights. And, we are here to validate how both Humanism and the arts allow humans to find voice, and in that voice, power to impact politics and policies.

For those of you here today not familiar with humanism, you have heard from our president and others how humanist beliefs stress the potential value and goodness of human beings, emphasizing common human needs and seeking rational ways of approaching human problems.

There is a strong arc between humanism and arts. In a 1992 talk entitled “Humanism, Reason, and the Arts,” Fredrick Edwords, the then executive director of the American Humanist Association, proclaimed that: “Literature, drama, dance, music, painting, sculpture, architecture, and other art forms often allow a culture to find its identity and crystalize its vision,” emphasizing that “artistic expression, when effective, often bypasses the human reason and appeals directly to emotion.”

Indeed, different art forms render worldviews through a distinctive lens. Poetry, novels, and essays tell stories through words and language. Paintings, collages, prints, sculpture, and photography imprint images that stir the imagination. Film and theater combine words and images often immersing our sensibilities with the fierce focus of a darkened room. Music stimulates multiple brain centers intensely evoking memory. And dance combines the power of music and movement to render emotions, such as the trauma and pain of torture, to make something so beautiful, as Susana di Palma once said, that no matter how grotesque, the audience can access the violence to comprehend it with integrity and passion.

So, today we’ll examine how artists use their tools to transform repression, torture, and other world woes through acts of the imagination that allow audiences to be part of an experience that might otherwise be too brutal to confront.

In a brilliant 1995 article that appeared in the Loft’s newsletter reviewing the power of di Palma’s “Garden of Names” performance, Diane Wilson wrote: “Unlike the narrow vision presented by the news media, art acts as a bridge between human beings. By establishing empathy across the barrier of trauma, by allowing us to see and feel and hear what might ordinarily be too painful, art makes change possible. It does this not by sweetening the taste of a bitter pill, but by acting like a shot of adrenaline straight to the heart.”

Photo: Susana di Palma describes at the chapter meeting how Pablo Picasso’s painting “Guernica,” about the aerial bombing of the Basque town of Guernica during the Spanish Civil War, powerfully affected her. Photo by Richard Trombley.