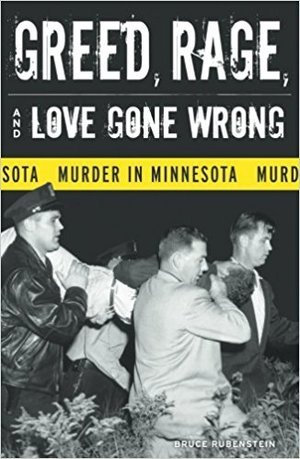 Have you ever wondered how Humanists of Minnesota got its start? It’s more dramatic than you might think, involving insurance fraud and murder. Paul Heffron, our chapter historian, was in the middle of the action and tells the story here.

In the spring of 1986, American Humanist Association (AHA) members in the Twin Cities area were called to a meeting at the First Unitarian Society in Minneapolis. About 20 of us showed up.

Jean Goins, a local resident who was an AHA board member, asked us to consider starting a local AHA chapter. I was surprised to discover that another chapter already existed, founded and incorporated by someone named Leonard Richards. Apparently he was the only member and the group had no meetings. Chapters were required to send a list of their members to the AHA every year, and Richards had never done that.

Jean had called the meeting in hopes of starting a new chapter as an antidote to Richards’ suspicious creation, presumably with the expectation that his chapter could then be decertified. We eventually learned that there was a shocking back story to Richards’ activities, one involving insurance fraud and later murder.

The story is told in the book Greed, Rage, and Love Gone Wrong: Murder in Minnesota by Bruce Rubenstein: Richards apparently set up the AHA chapter as part of an elaborate insurance scheme involving his half sister, May Wilson, dating back to 1972.

Knowing that she was going to spend a lot of time in hospitals, Wilson took out many hospitalization insurance policies with Richards’s encouragement. In time she collected over $700,000 on the policies and donated the money to churches and other organizations that were created and controlled by Richards, of which he was apparently the only member. The insurance companies became suspicious and filed suit. They settled by paying a lump sum for the cancellation of the policies.

Richards then took out more than 50 life-insurance policies on May’s life worth millions of dollars, some of which were written to include paying off for death by homicide. May’s body was discovered in 1982 in a building controlled by Richards and the medical examiner ruled she was murdered. There was not enough evidence for a criminal indictment, but in 1985 the insurance companies got a judgment in civil court that absolved them from having to make any payments on the policies.

Rubenstein writes that  Richards created more than 50 nonprofits and trusts, including “The Humanist Association,” that were designed to funnel money from insurance payments back to him.

When we had our meeting at FUS in 1986, Richards showed up as an AHA member and said there was no need for us to found a new chapter since he had already created and incorporated one, which he invited us all to join.

Russ Roehm and John Hubner, both AHA members, apparently knew of Richards’s notoriety and wanted him banished from the proceedings. The meeting almost turned into a shouting match, but there was general sentiment for creating a new chapter and electing a temporary chairperson to convene a committee to write bylaws. In one the most foolish actions of my life, I volunteered to chair that committee.

The committee meetings were a disaster. Richards showed up faithfully. Bernie Schatz, a long-time AHA member, was my ally in trying to make progress, but we had the cart before the horse. We were trying to write bylaws before we had a functioning group. We were a dysfunctional committee and it ended with my resignation.

Bernie was not willing to give up. He got some of us to form a steering committee for a new organization. Ray Daum was chair; Bernie was secretary-treasurer and newsletter editor. Russ Roehm, Dr. Arnoldus Goutsmit, and I were members. We had some meetings of the new organization in 1986 under the tentative name of Humanist Northstar.

In October, Bernie produced the first issue of Humanist News, a newsletter of what we then called the Humanist Association of Minneapolis and St. Paul, which eventually became Humanists of Minnesota.

The AHA granted us chapter status in November, and in December Fred Edwords, editor of The Humanist and executive director of the AHA, came to our December meeting as the featured speaker. At the meeting he presented us with an official certificate of our charter as an AHA chapter.

The AHA asked us to form a committee and conduct a hearing on whether Richards’s chapter should be decertified. I was on that committee, along with Dorothy French, Suzie Leavitt, and one or two others. We conducted a hearing at which Richards pleaded his case. We recommended decertification and the AHA removed chapter status from his organization.

Richards continued with his nefarious activities. In 1991, after two trials, he was convicted of murdering Richard Stratton, a young lawyer he had engaged to handle some of his organizational matters. Alerted by Richards’s girlfriend, police had found Richards in the basement of his house in a bloody scene in which he was engaged in chopping up Stratton’s body, apparently with the intention of burying it beneath the basement floor.

In 1994, he was finally also convicted for the murder of his half sister. While the various trials were pending, Richards ran for Minnesota State Treasurer in 1990 from jail and received 33,000 votes. He is now serving two life sentences in the Oak Park Heights maximum security prison in Minnesota.

So, thanks to Richards, we were compelled to create a local AHA chapter to rectify a situation in which a phony chapter, apparently as part of a diabolical scheme, was the only “organization” representing the AHA in Minnesota.

I am the only founding member still alive and active in our chapter. Last fall, Richards sent me a letter recalling a personal conversation we had had during the time of the committee meetings, referring to his “near-lifelong social-justice activism,” and enclosing copies of related documents.

I was not aware of Richards’s schemes back then, but remember that he once called me, spoke hysterically, and made threats against Bernie Schatz.

Fortunately, neither Bernie nor I became homicide victims in this story of our founding, one that would make a good Alfred Hitchcock movie.

Read more about Richards in the chapter “The Courtship of Linda Winbush” in Greed, Rage, and Love Gone Wrong: Murder in Minnesota by Bruce Rubenstein (University of Minnesota Press, 2004). Rubenstein is an investigative reporter and writer in Minneapolis who specializes in criminal and legal cases.