Really, the End of Work? Will Robots Raise Our Children? 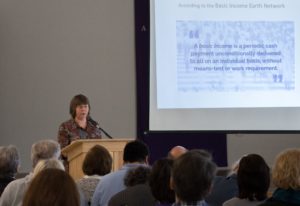 Liane Gale, founding member of Basic Income Guarantee Minnesota, spoke to the January chapter meeting about the move to give everyone a periodic cash payment without any strings attached.

While people have suggested this approach for various reasons — to eliminate poverty or replace salaries when jobs disappear due to automation — Gale advocates it as a way to free up people to do work that is focused more on caring and respect for the planet.

The basic income movement is more advanced in Europe than the United States; Switzerland held a referendum on the concept in 2016, though it was rejected. Gale declined to discuss how basic incomes would be financed, saying, “If you want to make something happen, it’s possible.”

Commenters had a lively discussion about the presentation on the Meetup notice, which you can find here.