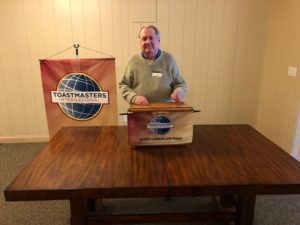 Toastmasters clubs, which are devoted to public speaking and leadership, can be found all around the globe. But the Twin Cities hosts a club with an unusual mission — to offer humanists, secularists, atheists, or other freethinkers a supportive environment to discourse on subjects that interest them.

Freethought Toastmasters, created 20 years ago, is a member of Toastmasters International, which serves 352,000 members and 16,400 clubs in 141 countries. But it differs from other clubs in a distinctive way: we do not discourage speeches about religion and politics.

While many speeches are about the significant events of the speaker’s life, as you would find at any other Toastmasters club, they frequently touch on the topics of religion and the separation of church and state. Members are welcome to speak about anything at all, but as a rule the speeches have more substantive content than I have found in any other club. For example, we were hearing powerful speeches about problems women confront in the workplace long before the #metoo movement.

Typically, we schedule three speakers for each meeting. The format is similar to that of every other Toastmasters club: we have prepared speeches, evaluations of the speeches, and an exercise in impromptu speaking called Table Topics. In that exercise, a Topics Master asks a question and then calls upon one of the members to answer it in one to two minutes.

At most Toastmasters clubs, the questions are on themes like “The Weather” or “Celebrating the Holidays,” which reward imagination and humor but offer little opportunity to marshal knowledge and logic into a sound and compelling argument. At Freethought Toastmasters, the theme is often more stimulating, inspired by current events, politics, and philosophy. Members may be asked to take a position on a complex issue such as nuclear arms reduction, Brexit, or trends in wealth distribution, and to justify it with evidence and logical argument, all within the brief time limit.

To stimulate logical discussion, Freethought uses a unique form of Table Topics at every other meeting, “Triple Round Robin Table Topics.” After the prepared speeches, the members break into small groups. Each group decides the topic they will discuss, nearly always, but not necessarily, the topic of one of the speeches they just heard.

They then go around the table, each person speaking in turn on the selected topic three times -the first time for one minute, the second time for two minutes, and the third time for one minute again. In this form there is actual exploration of different views, as it invites replies to other members of the group.

One way that Freethought Toastmasters surpasses most other clubs is that we give candy for prizes! After the prepared presentations, we vote for best speaker. When we have normal Table Topics, with a Topic Master, we also vote for the best response; but when we have Triple Round Robin Table Topics, each table picks a winner.

Other meeting roles include a Timer, a Grammarian, an Ah-Counter, and a Joker (who warms up the audience with a joke, often about religion or myths, before the featured speeches). The General Evaluator comments on how everyone except the speakers performed their roles.

After each meeting, we have a light meal, which provides the opportunity to socialize outside of the formality of the club meeting.

Freethought Toastmasters meets the first and third Mondays of each month in the party room of Larpenteur Estates, 1276 Larpenteur Ave. W., St. Paul. We are always happy to have guests, so please join us! Our meetings are gaveled to order at 6:30 p.m., but we encourage guests to come earlier to get a chance to meet some of our members. We adjourn for the meal at 8 p.m. If you plan to come, I would appreciate a note to nup@Minn.net.