2017: A Year of Change for Humanists of Minnesota 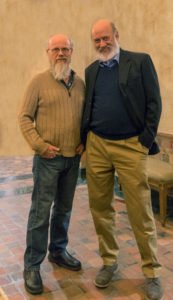 Among the 2017 topics: Pros and Cons on Nukes; Spirituality: Is There a There There?; and The Future of Work. The program is designed to sharpen our critical thinking skills. Participants analyze assigned articles and videos and are prepared to discuss them. That’s half the learning right there.

Often we are familiar with the arguments and justifications for our own positions, but the D-Cubed process forces us to examine opposing views. Humanists of Minnesota is a community with similar views on many social topics, but with enough diversity of experience to generate lively discussions.

The two leaders, longtime humanists Jerry Smith and Mark Thoson, alternate months as leaders. One selects the topic, readings, and videos; prepares questions; and leads the discussions, while the other attends both sessions. The following month, they switch roles. These sessions are advertised on HofMN’s Meetup site.

Mark and Jerry speak freely of the challenges they face: finding the time to do background reading to choose a topic; re-reading some of those pieces and finding others so that there is a balanced list of readings and videos; writing up the class description and assigned articles for the Meetup notice; drawing up a list of questions to hand out at the beginning of class; and finally, leading us through the discussion and following up with dinner. Then, they lead another group all over again the next day!

Their duties also include making the discussion as comfortable as possible for everyone to speak, preventing the big talkers from dominating, bringing out all the themes, and carefully exploring the most nuanced facets. Both are good listeners, careful not to side with anyone, but emphasizing important points as called for. There are no winners and losers — just participants and learners.

A frequent question of people considering attending is, “Will I have to speak, or may I choose not to?” There is an opening ritual in which we go around the room and everyone states their name and answers an opening question. It is never a factual or “gotcha” question, but one of opinion. If you are reluctant to talk you can pass even on this, so nobody should feel intimidated. Mark and Jerry like to see new people there, and especially people new to Humanists of Minnesota. Some who come find it so satisfying that they decide to join the organization.

Jerry hardly needs this extra practice for his day job, as Professor at the University of Northern Iowa College of Business for 22 years. Mark keeps up with him admirably, making up for what he lacks in experience with his own dedication and skill.

It’s all the more surprising that these two conceived of this format and volunteered to lead it since they agree that both of them are rather introverted. But both value the social aspects of the work. Mark is also motivated by curiosity and enjoys the intellectual challenge because in his day job he has always worked with his hands. Jerry, who has taught several series on critical thinking and other topics for Humanists of Minnesota, sees D-Cubed as another way to contribute to the organization.

Both cite “Dinner!” as a motivating factor; however, we have no idea whether by that they mean the food, the company, or both. We’ll say both. For Mark, simply the feeling of being appreciated is also a big reward. He enjoys those moments when someone comes up to him after a meeting and tells him “Hey, I really enjoyed this.” And finally, they agree completely that this chance to work with a real friend was a major pull, and that is wonderful to see.

Participation in D-Cubed is limited to 17 people. Very occasionally there are wait lists; but more often, if one of the weekend sessions is filled, there is room left in the other. The leaders say they select topics that reflect their own interests, are in the news or generating public controversy, or are something attendees want to debate. Often these two give meaning to the term “fearless leaders”  because they don’t shrink from controversy.

Seldom does the discussion become heated or veer out of control, but humans being human, it has happened. We have heard one or the other leader step in and wryly comment on how volatile a subject is, or how heartfelt; but they also sometimes sit back and study the situation, letting it play out and trusting debaters to handle it. Both approaches seem valid.

When someone goes off-topic with a long, personal story, the leaders gently interrupt and refocus attention on where they are headed next. Both leaders arrive with a list of questions based on the readings and videos that they hand out.

Jerry says that his most frustrating meeting was on the topic of international trade. He intended to begin by persuading the group that this is a good thing as it helps all nations to focus on the production that they do well, while enabling them to buy other goods more cheaply than they can be produced domestically. But many members contended that whether trade is good or bad depends on many factors. Some declared themselves to be socialists, although some were more concerned with the maldistribution of wealth that has resulted from market economies than with ownership of the means of production.

Jerry and Mark both derive personal satisfaction from the intellectual challenge of conducting the D-Cubed sessions. Jerry is pleased that no session has ever had “dead time” nor ended with personal animosity among the participants. Mark recalled that one participant was so riled at a session he led that she started to leave, but decided during further discussion to stay for the whole meeting.

Why do people sign up for D-Cubed? Reasons people gave at a recent gathering: to practice critical thinking skills, see what the other side is thinking, hear diverse perspectives, keep their sanity, vent, work out a new paradigm, talk about ideas — and save money on shrink bills.

Sometimes the Saturday and Sunday sessions differ, depending upon who shows up and the mix of personalities involved, but that’s the fun of it: discussing these issues with an unpredictable mix of strangers and friends.