‘Tis the Season of Excess, But Also of Joy and Wonder

As we gear up for critical 2018 state and national elections, it’s a good time to think about how to  improve our electoral system. Three speakers at our October chapter meeting suggested ways to make our votes count more and diminish the harm special interests inflict on our democracy. 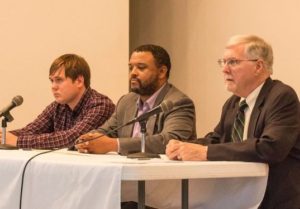 Voters in the Minneapolis and St. Paul local elections on Nov. 7 got first-hand experience with ranked-choice voting, which speaker Karl Landskroener said “changes the way the game is played.”

In this system, people can vote for multiple candidates, ranked in order of preference. Voters can select up to three candidates for mayor in Minneapolis and up to six in St. Paul.  If no first-choice candidate attracts a majority of votes, subsequent tallies eliminate the lowest-ranked candidates one by one. Voters for defeated candidates will see their votes added to the totals of their next choice, and so on, until a winner emerges.

Landskroener, field director for Fair Vote Minnesota, said this approach gives third parties more power because people can vote for them without worrying they will siphon votes from their preferred major party. They can rank candidates from the major party second.

It also discourages negative campaigning because candidates have an incentive to woo their opponents’ supporters to rank them second, he said. Fair Vote Minnesota is working to expand ranked-choice voting throughout Minnesota.

Brett Buckner, advisory board chair of Common Cause Minnesota, emphasized the importance of the 2020 census, which will be used to configure the state’s legislative and Congressional districts. Remember, he said, “The mapmaker controls the process.”

Redistricting can turn into gerrymandering, where geographic lines are drawn in a way that advantages one political party or group. Common Cause is now challenging North Carolina in federal court, for example, for reshaping its electoral districts to give Republicans a lopsided number of Congressional seats.

One way to mitigate gerrymandering is to transfer redistricting power from state legislatures  to nonpartisan independent commissions–an approach Common Cause is pushing Minnesota to adopt.

Bruckner noted that there is a threat that Minnesota could lose one of its eight Congressional seats after the 2020 census so it’s important that every person is counted.

The Supreme Court’s 2010 Citizens United decision, which removed restrictions on political campaign spending and opened the door to a flood of untraceable “dark money,” has “turned our election system upside down,” said George Beck, founder and chair of Minnesota Citizens for Clean Elections.

The high court is unlikely to change its mind, he added, but there are steps that Minnesotans can take to try to contain the damage: