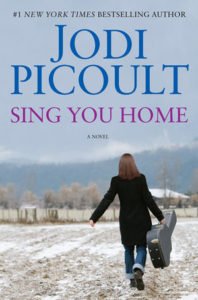 Few would call Jodi Picoult a literary author, that is a Nobel- or Pulitzer-quality writer. She does not experiment with the art form, but primarily writes straightforward novels about social issues many are still puzzling over or up in arms about, long after publication. Her novels have tackled topics like conceiving a child to be an organ donor for a sick sibling, Asperger’s Syndrome, sexual abuse, teenage suicide, and a host of other difficult or controversial subjects. They are often wrapped up in a mystery. I’ve only read a couple of her novels, but found them thought-provoking and generally well written.

Recently, I picked up Sing You Home, about a music therapist married to a landscaper, both of whom have fertility issues. She desperately wants to bear a child, and the couple goes through in vitro fertilization several times, only to fail to conceive or lose the baby. Both of those tragedies occur and cumulatively leave them financially strapped. He finally bolts and divorces her and moves in with his evangelical brother and his wife, who are also childless. Then his former wife enters into a lesbian relationship, goes to a neighboring state to marry, and immediately wants a child, asking her former husband, now born-again, to sign a consent form giving up any claim upon their frozen embryos. (I know, it sounds a little like melodrama, but believe me, it gets worse.)

Lurking in the shadows is a smarmy, flashy evangelical Christian lawyer who seizes upon this situation and files suit, claiming for his client the embryos, or “pre-born children.” They are destined not for the actual father, but eventually for his evangelical brother, to whom the father wants to give them. Of course, the reader guesses immediately that this flashy lawyer cares less about who receives the embryos than he does about his own publicity and image, because he makes a huge God-against-the-heathens play in the media. You’ll dislike him, and love the pro bono female lawyer representing the lesbian couple.

As I finished this book, it occurred to me that humanists would also enjoy wrestling with some of the issues in this book and would love to hate the evangelicals, who bend the rules and prey upon each other for their own purposes; there is nothing Christ-like about them. On one level, it’s a bit simplistic, but on another, it’s a great exercise in ethical reasoning, to put yourself in the place of the curmudgeon judge, as he wrestles with each evidentiary issue raised. Cases don’t always turn out to our satisfaction, and occasionally, it comes down to which of the parties is most appealing, not which should prevail under the law. Sometimes lawyers cheat. And sometimes, parties sabotage their own cases.

It is gratifying to think about how far our country has come in recognizing gay rights just since this book was published six years ago. Lawyers might even hesitate to refer to “God-fearing Christian homes” for fear of being overruled or overturned on appeal.

Of course, I’m not going to give away the trademark Picoult surprise ending here, but if you read this book and are not surprised at the outcome, seek me out and tell me why. Then we’ll talk.