Take It From Me: How Not to Handle Military Condolence Calls 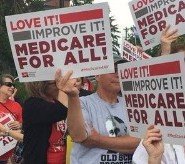 Momentum is growing to move to a single-payer health-care system in the United States, that is one that operates similar to Medicare, with a public agency covering the costs of essential services. To learn more about it, Humanists of Minnesota members Joyce Edwards, Meline Juarez, and Suzanne Perry attended a one-day seminar organized by the Minnesota Nurses Association.

The event attracted representatives of various organizations that support single-payer systems including Main Street Alliance, Healthcare-NOW!, Health Care for All Minnesota (HCAMN), and Physicians for a National Health Program. The seminar offered workshops on topics including Health Care Policy and Single-Payer 101 and Single-Payer Financing Studies.

Some eye-popping statistics jump out:

More information
To learn more and find materials from this informative seminar, go to this wiki page.

Possible Partnership with HCAMN
Joyce and Meline also met with Ron Jankowski, the chair of HCAMN, to discuss ways Humanists of Minnesota can partner with that group and further the single-payer cause as part of our Social Action Team’s health-care mission. Specifically, we explored the possibility of creating our own HCAMN chapter or aligning with HCAMN’s St. Paul and/or Minneapolis chapters. HofMN will notify interested members of future educational events or events where we can advocate for health-care reform.

Several humanists attended the Water Quality Town Hall meeting at the Urban League in North Minneapolis. This was one of several forums held throughout Minnesota where Governor Dayton and members of his administration spoke of their commitment to improve Minnesota’s water quality by 25 percent by 2025.

Professionals involved with our state’s infrastructure, including water engineers, gathered with attendees at round tables placed throughout the room; everyone at the table had a voice. People talked about concerns for their communities and discussed how can we increase Minnesotans’ quality of life and improve our state’s economy by improving the state’s water quality. Suggestions and proposals were discussed and written down to be given to Governor Dayton and his staff.

I also attended a public meeting in St. Paul to discuss a plan by the Canadian oil pipeline company Enbridge to build a replacement for Line 3, one of the company’s six pipelines built in Minnesota in the early 1960’s. A critical point that can be easily verified is it’s not a question of if oil pipelines will leak, but when.

In 2010, an Enbridge oil pipeline burst under the Kalamazoo River in Michigan and this was the largest inland pipeline disaster in North America.  Despite Enbridge’s clean-up, pollution may never be eliminated and this has caused huge health problems, including respiratory, gastrointestinal, and neurological diseases that are linked to cancer, for people in surrounding areas.

A 5,000-page Draft Environmental Impact Statement for the Line 3 replacement was written by the Minnesota Department of Commerce earlier this year and followed by public meetings throughout the state where Enbridge supporters and foes gathered to give testimonies to the Public Utilities Commission. The proposed route of Line 3 replacement endangers not only Minnesota wetlands and rivers but also sacred wild rice lakes and streams important for the food and the lives of the Ojibwa and other Indigenous peoples.

In early September the Commerce Department released its new recommendation stating that Enbridge has not established a need for the replacement of Line 3 and has not given a factual and clear analysis of future demand for crude oil. The recommendation was based on the analysis by London Economics International, a global firm that found refineries in Minnesota and the Upper Midwest are operating at close to full capacity and have little or no room to increase the amount of crude oil now or in the future.

The United States has had an oil glut for quite a while and is sending some of it overseas. At the  September meeting, attendees from the age of 16 to seniors gave inspiring testimonies against building the line 3 replacement. But the most poignant were from young Indigenous men and women who also spoke of the dreadful history of abuse the Native people have endured for hundreds of years in this country. The Minnesota Public Utilities Commission must now decide if a Certificate of Need should be granted to Enbridge and people across the state will be waiting for this decision.

As humanists who are concerned with the natural environment and believe in science-based evidence, we have an opportunity to be involved with this important decision and others in the future.