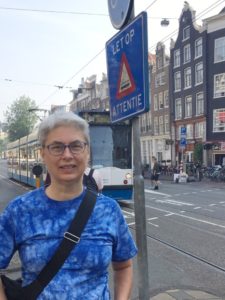 Recently I traveled abroad for the first time in my life. My trip to Germany and Amsterdam with my husband as companion was wonderful! I can now better understand why so many are smitten by the lure of travel. While it is cliché to repeat what is often said about Europe – “everything is so old” and “it has so much history” – one is struck by those impressions wherever you go. What a fortuitous coincidence then that on this trip I decided to bring along the book, The Silk Roads: A New History of the World by Peter Frankopan. While I got only part-way through the book, it nonetheless provided a helpful historical lens through which to do my sightseeing and to ruminate on my observations.

How novel and enchanting to see such old towns and cities, tour castles and cathedrals, walk cobblestone streets, and encounter vestiges of an older civilization almost everywhere. But especially fascinating was to see old Germany juxtaposed with the new and contemplate the changes over time. Upscale multi-unit housing was being built in small quaint towns just a stone’s throw away from the mostly intact city walls of the 13th century. Larger cities were donning new construction in the shadow of cathedrals and legendary city centers. The historic epicenter of trade on the Baltic coast turned resort district in the last century was clearly experiencing yet another building renaissance for the growing year-round residential, vacation, and tourist markets. And when traveling by car, traffic was frequently delayed by seemingly ubiquitous road construction to accommodate a more prosperous and mobile population.

All this activity was met with consternation by our host, my husband’s aunt who lives in a hamlet in the Rhineland and served as our guide while we were in Germany. She expressed many of the concerns often recounted in the media by some of her compatriots: the excessive influx of immigrants, the generous perks given to foreigners, the seeming disregard of regular Germans by the government, dubious construction projects surely to benefit only the wealthy, and ever-rising housing costs. On a lovely boat ride down the Rhine, a conversation with two vacationing social workers—one from Germany and another from the Netherlands—confirmed that the recent rapid influx of immigrants was indeed challenging for both those newly arrived and the populace at large.

But to me, albeit a tourist, Germany and Amsterdam were nothing short of fabulous. The projected dire effects of the influx of immigrants in Europe, particularly in Germany, were not evident. We witnessed lots of new construction and thriving cities and towns—filled mostly with people who looked like us. Street life was vibrant, sidewalk cafes were busy even in September, train stations were bustling with people from all walks of life, and the trains were comfortable and fast. Roads were typically congested while countless people rode bicycles. In many ways Europe was familiar and easy to navigate, being much like the U.S., but in other ways so much better—especially the more compact livable cities with an environmentally conscious transportation system that crisscrossed the continent. The only downside for me was all the smokers. But I digress.

So many people ride bikes in Germany, but Amsterdam must be the biking mecca of the world. There are more bikes than cars, and locals ride them to get to work, do errands, and go out socially—in rain or shine. My husband and I were cautioned by our Airbnb host about using the bikes he made available to us. Tourists often get in bike accidents because they don’t understand the bike culture in Amsterdam or how to traverse the city streets. One need not fear cars so much as be alert to the plethora of bikers, pedestrians, trams, and buses. We did venture out on bikes one day across the city and into the countryside. It was a great adventure as we got to see and experience so much of the city and surrounding area up close.

While my reporting is anecdotal the facts bear me out: Germany is doing well and Chancellor Angela Merkel has managed the immigration influx of 2015 quite adeptly. Amsterdam is in fine shape as well. Instead of being a liability, immigration is seen by many to be essential to Europe’s future vitality. The fertility rate among native-born Europeans has plummeted so much so that immigrants from outside Europe will be necessary to keep the economy going strong. As Frankopan’s New History of the World attests, migration and intercultural exchange have always been indispensable to the renewal and growth of societies.

But across Europe the fear-mongers are at work—just as in America. During the recent federal electoral campaign in Germany, the far-right party, Alternative for Germany (AfD), displayed a poster with a pregnant woman and the message “We can make our own Germans” for an anti-immigrant and anti-abortion sentiment rolled into one. The AfD did indeed gain ground in the election—coming in third and winning seats in the parliament. The story is much the same in other European countries where nationalistic and backward-looking political parties are also growing in strength.

Germany and Amsterdam are dynamic, multifaceted places more accurately understood in historical context provided by The Silk Roads. Fifteen hundred years ago Europe was a mere geographical backwater that only came into its own through extensive trade with more advanced civilizations from the Middle East and Asia. It may be surprising news to some, but essentially Islam and other foreign encounters helped bring Europe out of its dark ages. Just understanding the fluidity of religious practices and cultural mores that transpired over the course of generations could help loosen our rigid geographic and ethnic constructs of today. Clearly the world is not a static place; the spheres of influence and power turn through time. One lesson of history should be that we need not fear others so much as engage with them for mutual benefit.

I won’t carry on about the Frankopan book. You can read it yourself if you are so inclined. But let me just say: Without historical perspective we get stuck in our own time and way of thinking. We fail to recognize all the forces that brought us to any particular point in time and are reluctant to admit that our current position is transitory.

It is often said that traveling is a good education and helps open minds. Indeed, it may. And for most people traveling is fun and exciting. But I maintain that studying history is a more thorough and effective way to open one’s mind. Traveling may expand our purview and provide a “teaser” about a new or different culture, but the essential component to knowing a place and understanding the world is through the study of history. So don’t just plan your next jaunt. Crack open a history book for an even greater adventure.

Audrey Kingstrom is president of Humanists of Minnesota.