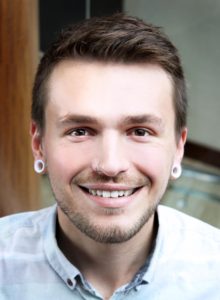 More than 70 humanists and friends attended our first chapter meeting of the new season on September 16 to hear Chris Stedman give an impassioned speech on “Why We Need Humanism Now.” He has been a humanist chaplain at Harvard University, is the founding executive director of the Yale Humanist Community, and has moved to the Midwest to build a new Humanist Center of Minnesota. He is currently a fellow at Augsburg University.

Stedman started by reminding us that a world without religion is not necessarily “good”: Atheism is the absence of belief; morality does not automatically arise from atheism. As an example, he gave us Richard Spencer. (Note: Spencer is a high-profile white supremacist who is credited with inventing the term “alt-right.” He acknowledges that he is an atheist but prefers to be called a “cultural Christian.”) Though atheism is not confined to a particular party, the latest Pew polls indicate that 15 percent of atheists identify as Republicans and 85 percent as Democrats.

Stedman called for a rejuvenation of humanism as a path to maintaining a valid system of morality and to separate us from the Spencers of the world. He took us through a short history of the humanist movement by citing the three manifestos that define modern humanism. Humanist Manifesto I (1933) had a religious tinge to it (having arisen from a Unitarian tradition), but in common with all the manifestos, called for a human focus to improve the human condition and emphasized justice for all. Humanist Manifesto II (1973) added items such as the fight against racism and the need for an inclusive world society. Manifesto III (2003) looked even further out, declaring the next century to be the era of humanism. Stedman cited Pew studies showing that the nonreligious represent the fastest-growing sector of our political landscape, but they are not necessarily civically engaged. He also reiterated that non-religiosity is not necessarily “good” and that we need a community-based humanist movement.

Stedman then took us through his journey to humanism. Though brought up in a nonreligious environment, when he was looking for meaning in his life as a teen, he was drawn to a nondenominational church. However, his experiences there showed him how religion can be used to dehumanize people. Eventually he found the humanist communities at Harvard and Yale. So the question he raises is: “Where are the unaffiliated finding community, support, resources etc.?” Many need a place that does not feel like a church (from which most are fleeing). This is why he is working toward a Humanist Center of Minnesota: he sees humanism standing on the side of the oppressed and marginalized and this, rather than just atheism or irreligion, will resonate with many of the unaffiliated.